The Circus Comes to NEDCC!

Shelburne Museum conservators, curators, and staff members were called to the scene of a home renovation in Colchester, Vermont, in 1991 when the removal of old exterior siding revealed five vivid circus posters pasted onto the boards beneath the siding. The posters were mounted on the house when a circus came to town in 1883, and they remained hidden, protected from light and weather, for the next 108 years.

The home owners, Gladys and Harold Degree, agreed to donate the posters to Shelburne Museum in Shelburne, Vermont, and conservators quickly realized that the safest and most efficient way to salvage the posters was to remove the boards from the house with the posters still attached. The boards, each with their fragmented section of poster, went into storage at the Museum, awaiting funding to have them professionally conserved.

That opportunity arrived in 2010, when the Northeast Document Conservation Center (NEDCC) treated posters from the collection at the Center’s Andover, Massachusetts, facility. Most of the boards were about 65” long and varied in width. The paper was discolored, dirty, and stained in places, and mold damage had left some sections degraded and weak. But amazingly, many of the images remained bright and clear. In addition to the splits between the boards, there were nail holes and tears throughout, many of which had been temporarily repaired with gummed cloth tape or Japanese paper. It was evident that the posters were pasted over other advertisements, and the treatment soon revealed that these were posters from another competing circus from the same season.

"In addition to their importance as works of graphic art and design from the period, the posters have historic significance, documenting a bitter rivalry between two circuses,” said Shelburne Museum Curator Kory Rogers. “This discovery confirms an advertising war between the Forepaugh and John B. Doris circuses, which were both in the area at the same time,” he added. “What an incredible find! To have not just one set of posters from the late 19th century in such excellent condition, but a second set as well is absolutely amazing.” One can imagine the John B. Doris Circus workers coming through town putting up their posters, while, close on their heels, members of the Forepaugh Circus pasted their larger posters over all the Doris advertisements.

This was a multi-level conservation challenge for NEDCC conservator Bucky Weaver. During conservation treatment at the Center’s lab, surface soil on each section was reduced and then each wood plank was placed in a water bath to allow the removal and separation of the multiple poster sections. Separating the superimposed poster sections was painstaking work, and Weaver was the first to glimpse the colorful circus images that had been hidden since 1883.

To reassemble the posters, the sections were joined together and lined with Japanese paper that had been toned with acrylic to give it the color of aged paper. In order to respect the posters’ status as historic artifacts, no missing portions of the images were reconstructed.

The newly conserved posters will be one of the centerpieces of Shelburne Museum’s extensive circus collection housed in Circus Building, a fanciful horseshoe-shaped structure designed to showcase the hand-carved miniature Arnold Circus Parade, which stretches nearly the full length of the building's 518 feet. At the entrance is another remarkable display: the intricate, 3,500-piece miniature three-ring Kirk Bros. Circus. An operating vintage carousel operates daily (weather permitting) just outside the Circus Building. Circus Building and the carousel are two of the most popular destinations at the Museum for families.

Click on any image for a larger view and all 24 photos. 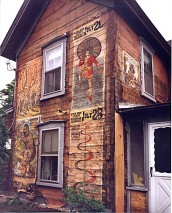 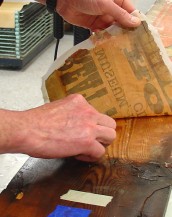 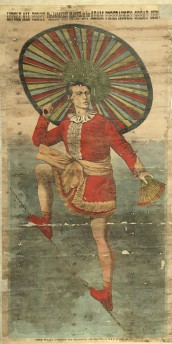