Are you fundraising for a conservation treatment, digitization, or audio preservation project, or other preservation activities?

NEDCC offers the Crowdfunding for Preservation program to help our clients spread the word about their active fundraising initiatives. We can help boost promotion of these efforts by posting pending projects on this page, linking directly to the institution's donation portal,  and by sharing widely on social media and via E-News Announcements.

LEARN MORE about how to participate in NEDCC's Crowdfunding for Preservation program.

The non-profit Blue Hill Observatory and Science Center, a National Historic Landmark located atop Great Blue Hill in Milton, Massachusetts, was recently awarded a “Save America’s Treasures” (SAT) grant, sponsored by the National Park Serviceand administered by IMLS,  to preserve many of their historic climate resources.

In support of this project, the Observatory is seeking $65,000 to fulfill the obligation to raise matching funds for our SAT grant to completely digitize, conserve, and properly store their hand-written climate record books, which date from 1885 to the 1950’s.

This grant, which will be administered by the  Institute of Museum and Library Services, requires a 1:1 match for the project. The volumes contain irreplaceable information from the early decades of the Observatory’s climate record, the longest running, most homogenous climate record in North America. The grant project will enhance its accessibility for science and education.  Climate action through scientific data dissemination is essential and beneficial both locally and globally!

The United Nations’ World Meteorological Organization has recognized Blue Hill Observatory as a Centennial Observing Station because of the long-duration and high quality of their climate record. With digitization through the SAT grant, researchers and scientists worldwide can make ready use of Blue Hill Observatory data while limiting handling of the fragile historical books, which will be housed in new custom archival boxes. This climate record is also a focus of Blue Hill Observatory's STEM educational programming. The Observatory serves roughly 4,000 adults and 4,000 students each year, and complete digitization of these materials will enhance the use of this data throughout their STEM educational offerings.

The dictabelt tapes are a part of a series of materials documenting Carty’s role as an attorney for the depression-era gangster and leader of the Karpis—Barker gang, Alvin ‘Creepy’ Karpis.

Carty, a WSU alumnus and former Clark County, Washington prosecuting attorney, was hired as a personal attorney by Karpis in 1969. At the time, Karpis was serving a life sentence for his role in the 1933 kidnapping and ransom of William Hamm, the millionaire giant of Minnesota’s Hamm’s Brewery.

Karpis was one of only four individuals to be listed on the FBI’s Public Enemy No.1 list and is documented as the first major arrest by J. Edgar Hoover. Documentation indicates that the dictabelt tapes contain conversations between Carty and Karpis, building a case for early parole. The tapes likely have significant information about Karpis’s arrest and his time in prison — and could have historical significance on the national level.

Currently, the dictabelt tapes are inaccessible. Dictabelt technology is obsolete and the players that are used to play the tapes are rare. Additionally, the tapes in the James E. Carty collection have some damage from being folded and creased over a long period of time. This damage would prevent the tapes from being played even if a dictabelt player was available.  NEDCC's IRENE system will used to safely retrieve the audio from the dictabelts.

WSU Vancouver Library Archives and Special Collections is seeking $3,500 to digitize and preserve the Carty tapes. 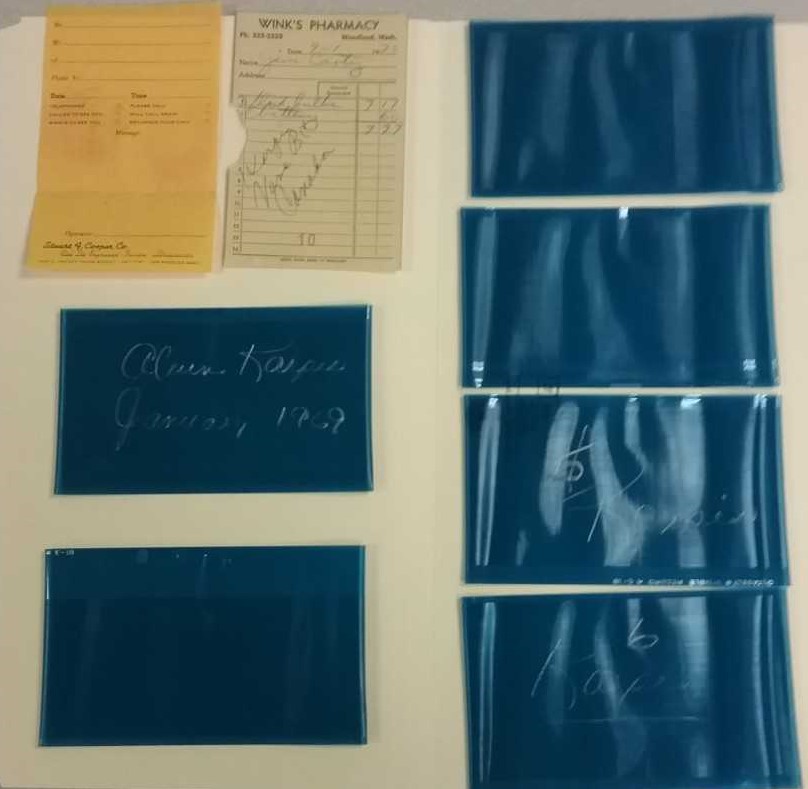 To learn more about the project, visit library.vancouver.wsu.edu/carty-project

The Alaska and Polar Regions Archives at the University of Alaska recently discovered four 78 RPM glass-based discs in the collection of Anthropologist Dorothy Jean Ray.  Robyn Russell, Collections Manager of the Library’s Oral History Program says: “I opened the archival box, and inside there were four 78 rpm glass-base records in faded paper record jackets. The only information we had was the hand-written labels. For example, “Aleut (ATTU) #7 12/4/1945 ‘Song sung by father to child upon return after long absence.’”

Robyn explains, “With audio collections, you can’t look in the table of contents – you can’t thumb through them like a book to find out what it contains. You have to have playback. We knew that these recordings were unique and we could see that they were extremely fragile.  We didn’t dare put a stylus to them.  They were essentially hidden gems.”

The discs were sent to NEDCC to be transferred using the IRENE system, a new ‘touchless’ technology developed by the Lawrence Berkeley National Laboratories and tested at the Library of Congress.

The discs were in relatively good condition and the Audio Preservation team was able to get sound from 7 of the 8 disc sides. The recordings were of a married couple from the island of Attu in the Aleutian Islands, speaking and singing. The recording was made on their return from a Japanese prisoner of war camp after WWII in 1945. These recordings are some of the only existing examples of the dialect unique to the Attu Island, and add to the little-known story of  the fate of the Attu Islanders during WWII.  The recordings can be now be fully transcribed and the music studied. 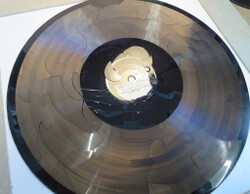 The Oral History Program is now in the process of fundraising to complete the complex manual tracking with IRENE of the final disc side, which is delaminating, a condition common to the glass-base discs of this time period.  The label is marked “Conversation Concerning Basket-making.” 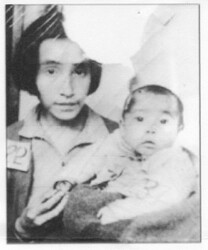 DONATE to the University of Alaska Oral History Crowdfunding Project

The Ashby Historical Society has recently received a late 1800’s copy of the 1775 Orderly Book of the Wyman Company an Ashby company during the siege of Boston in the Revolution.

An Orderly Book is like a ship’s log recording the day to day events of the unit.  In this case the Ashby men serving under Captain Wyman.

The book is the only surviving copy of this information and is in many ways priceless.  It is handwritten on handmade paper, probably by a descendant of Captain Wyman and was found in the old Wyman Tavern.  When copied it was nicely illustrated with both black and white and watercolor drawings.

The book is about 9X12 inches, the quality of the paper is such that it has survived well, however the binding is shot and the book cannot be viewed without causing further damage.

More information on the history of the Orderly Book.

The Westford Museum and Historical Society owns a pastel portrait of Gov. Long, which has been damaged over the years.

In September of 1857, freshly graduated from Harvard University, John D. Long came to Westford to become preceptor at the highly acclaimed Westford Academy. His detailed dairies documented his day to day activities at the school. The Westford Museum is creating a new exhibit about Westford Academy and would like to repair this pastel portrait of John D. Long to include in the exhibit.

John Davis Long was the 32nd Governor of Massachusetts, serving from 1880 to 1883. He later served as the Secretary of the Navy from 1897 to 1902, a period that included the primarily naval Spanish–American War. Help us preserve an image of such an interesting and important figure in history.

This thirty-four page booklet contains Reverend Jonas Clarke’s manuscript of the sermon he gave on April 19, 1776 “to commemorate the murder, blood-shed and Commencement of Hostilities, between Great-Britain and America” begun at the Battle of Lexington exactly one year before.  Clarke (1730-1805) was the minister in Lexington from 1755 until his death, and he was present at the parsonage (the current Hancock-Clarke House) with visitors John Hancock and Samuel Adams during Paul Revere’s visit in April 1775.  Clarke stood as a stronghold of Revolutionary ideals leading up to, and in the aftermath of, the Battle of Lexington.  This document is an important part of the Jonas Clarke Family Collection of personal papers and sermons held by the Society.

The Sandy Island Family Camp Archives is working to repair two historic landscape plans prepared for Sandy Island by the famous Olmsted Landscape Architects Firm and dated 1952 and 1938.  "The plans are drawn on paper that is too old and brittle for us to handle safely, so we would like to have the plans repaired by paper conservation professionals," says Sara Clarkson of the Archives Committee.  Once the plans are repaired, the plans will be digitized.  Both the original plans and the digitized images will be available to interested Sandy Island viewers, to Sandy Island and YMCA historians, and to Olmsted historians.

Sandy Island began in 1899 and was originally known as Camp Buena Vista, offering a vacation destination exclusively for men with simple tent camping. Owned by the Boston YMCA, the camp was renamed Sandy Island Men's Camp in 1920. By 1932, the camp, still exclusively for men, offered two dormitories with combined accommodations for fifty men.

With declining enrollment, Sandy Island offered an experiment in 'family camping' for one week in the mid-1930s.  The idea proved a great success and throughout the 1940's an increasing amount of camper enrollments were offered to single women and to families.  The camp gradually changed its focus from a men's camp, to a co-ed camp for adults, to its current status as a camp for families and single adults.  It is now known as Sandy Island Family Camp.

Sandy Island Family Camp is now over 110 years old. The island comprises 66 wooded acres. 54 lakefront cabins line the north and south sides of the island. The Lodge, the center of the camp's social activities, reminds campers of its history, with its large stone hearths, exposed beams and wood floors.

The Frederick Law Olmsted National Historic Site recently posted images on their Flickr collection that show on-site photographs of the Sandy Island "Mens" Camp in 1938 and after the hurricane in 1939. The first visit seems to correspond to one of the plans being conserved in this project. Amazing to see the photos snapped by the Olmsted team!  View the Images Here - Frederick Law Olmsted National Historic Site.

The hundreds of digital files will be added to the expansive electric railway collection held in public trust in the Museum's library archives and will be available to researchers for purposes of education, exhibits, and display development. These incredible files will be crucial in creating interpretation programming in supplementing other conservation and restoration work on the only surviving representative of the majestic, high-speed, electric interurbans of the PLI, The Narcissus.

For more information on the scrapbook and the Narcissus Project, visit the Museum's great blog post showing extensive detail of the scrapbook contents. 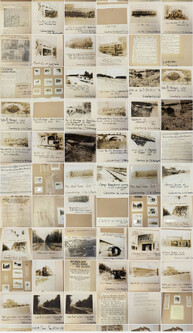 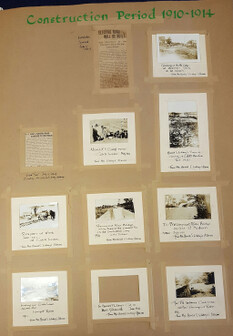 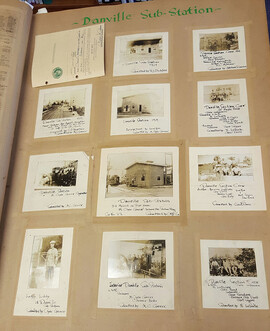 Note: When donating on the Seashore Trolley Museum's Donate Page, please click on "Other" and specify "Scrapbook" to be sure your donation is recorded for the conservation and digitization project.

These three almanacs provide an in-depth look at life and labor on an 18th century plantation, but the books are worn, with faded ink and torn pages.  Dating from 1792, 1797, and 1798, the handwritten plantation journal entries were kept by Allard Belin near Georgetown, South Carolina. Entries pertain to planting and harvesting, maintaining ditches and drains, problems with an overseer, as well as a list of the names of slaves and number of blankets they received.

These materials are frequently requested by researchers but their fragile condition prohibits access.  After treatment, the text will be available through digitization and the items will be part of our physical exhibit. 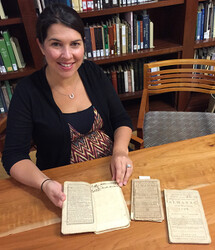 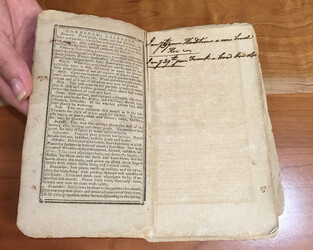 Interested in participating in NEDCC's Crowdfunding for Preservation program?