An Audio Mystery Arrives in a Box

In 2013, the Alaska and Polar Regions Archives at the University of Alaska Fairbanks (UAF) received a large collection of the works and papers of anthropologist Dorothy Jean Ray (1919-2007), who was best known for her ethnographic studies of native Alaskan peoples.  The collection was comprised of Ms. Ray’s manuscripts, papers, and correspondence, and there was no further information provided about the four audio discs.

Robyn Russell, Collections Manager of the Library’s Oral History Program says: “I opened the archival box, and inside there were four 78 rpm glass-base records in faded paper record jackets. The only information we had was the hand-written labels. For example, “Aleut (ATTU) #7  12/4/1945 ‘Song sung by father to child upon return after long absence.’”

Robyn explains, “With audio collections, you can’t look in the table of contents – you can’t thumb through them like a book to find out what it contains. You have to have playback. We knew that these recordings were unique and we could see that they were extremely fragile.  We didn’t dare put a stylus to them.  They were essentially hidden gems.”

It was about a year before anything could be done with the recordings. Before they could move forward, they had to try to try to identify the possible contents and significance, to learn what it would cost to preserve the recordings, then to research grant funding. “We were worried about keeping them too long,” UAF Assistant Professor and Oral History Program Curator Leslie McCartney says. “Discs of this time period are deteriorating rapidly, and the glass base makes them even more vulnerable.”

In the end, the University was able to fund the project and they didn’t have to apply for a grant, saving precious time. The discs would be sent to NEDCC to be transferred using the IRENE system, a new technology developed by the Lawrence Berkeley National Laboratories and tested at the Library of Congress. The IRENE system takes ultra-high resolution photographs of the grooves on discs or cylinders and then software translates the images into sound, all without touching the object’s fragile grooves.

IRENE Gets to Work

After receiving detailed instructions from NEDCC’s Registrar Jonathan Goodrich on packing and shipping the fragile glass-base objects, Leslie McCartney and Robyn Russell sent them off to NEDCC in Massachusetts in April 2016. Soon, then Manager of Audio Services Jane Pipik and Lead Audio Engineer Frank Cunningham began the IRENE imaging process.

Jane and Frank first examined all the discs, and found them to be in surprisingly good condition, except for one side of one of the discs on which the lacquer was beginning to separate from the glass substrate, a common problem with this type of disc. Upon examination, the intact discs looked as if they had been played rarely, if at all. “With IRENE you can actually see the damage caused by stylus playback by traditional equipment,” Jane Pipik explains. “The loss of audio content is often clearly visible in the shapes of the groove structures.”

The project was a perfect fit for the IRENE technology’s capabilities.  “The guiding principle for this project was intelligibility,” explains Frank Cunningham, “since it was possible that these recordings were an example of a dying language.”  As Jane and Frank listened to the audio output, they were able to ascertain that the transcription went well because several of the recordings were of folksongs. The  musical meter sounded right. “We didn’t understand the language,” says Frank, “but the emotion of the songs came through. They were beautiful, haunting folk songs, and the label titles gave us an inkling of what the songs might be about, such as ‘Mourning Song for Deceased Lover.’”

The IRENE technology is still evolving, and the process of building a knowledge base of scientific data on the system develops with each new project. NEDCC continues to work closely with IRENE’s inventors Dr. Carl Haber and Dr. Earl Cornell at Berkeley Labs to address specific challenges as they arise.

For the Aleut recordings project, the delaminating side of Disc 2 “Conversation Concerning Basket Making, Part 1,” presented a unique problem. Not only were delaminating pieces shedding from the glass substrate, 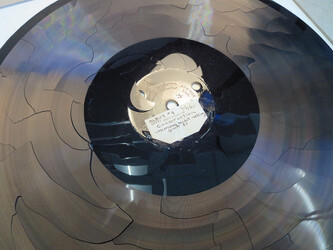 but those still bonded to it were shrinking and cracking away from each other. These cracks create an added challenge for the IRENE software when translating the images into sound. Frank imaged this disc from five slightly different focus heights (in steps of 50 micrometers) to ensure that the master image file contained all the data that was present on the carrier.

“The TIF image is the preservation master with IRENE,” says Frank. “What comes out of IRENE is the best possible image, including the full depth of the groove and all the flaws and evidence of damage. Some of this is fixed by optical processing when the audio file is created. Some is fixed later by audio processing using modern digital noise techniques that did not exist 20 years ago. Having the optical file makes it possible for an audio engineer to eliminate the noise at a later date. What's most important with fragile carriers such as these is to capture those images now, before the material deteriorates further."

The first processing step to retrieve sound from this delaminating disc will be the careful manual tracking of each groove in the IRENE image TIF files before applying the optical processing. It was decided to wait for a second phase of the project along with additional fundraising, in order to complete the 30-40 hours that will be required to complete the careful tracking for this last recording. Yet another piece of the mystery awaits discovery for researchers at UAF!

As the NEDCC Audio Preservation staff worked with the files from these recordings, they received an urgent message from Leslie McCartney at the University of Alaska. She had just learned that by an amazing coincidence, the 2016 Institute on Collaborative Language Research (CoLang) was to be held in Fairbanks in June and July – just a few weeks away. (The CoLang Institute is held only every other year in different parts of the country.) An additional surprise came when they learned that one of the three-week practicum workshops was going to be about Unangam Tunuu (the language spoken in the Aleutian Islands) and led by Dr. Anna Berge, Professor of Linguistics at UAF, and Mr. Moses Dirks, a native speaker of Unangam Tunuu of the Atka dialect.  Leslie McCartney saw this as an ideal opportunity to obtain a basic translation of the recordings. The NEDCC IRENE staff prioritized the completion of the work on the files and sent the preliminary wav files off to Fairbanks.

On July 13 and 14, 2016, “Mr. Moses,” as he is known, came to the Oral History department at the University to listen to the recordings. Leslie McCartney went into the listening booth with Mr. Moses and Dr. Berge and played back the audio files that NEDCC had sent, which feature a man and a woman singing or talking, and sometimes playing the guitar. As soon as he began listening, Mr. Moses thought he recognized the voices as Parascovia and Mike Lokanin, husband and wife and former residents of Attu, the westernmost island in the Aleutian chain. When they listened to the Mourning Song, the speakers actually identified themselves in the recording.  He noted that the couple was speaking in the dialect of Attu, which is similar but different than the Atka dialect, but he understood it well enough to provide a translation.

After conducting research in the weeks that followed, and with Mr. Moses'  knowledge, Leslie McCartney and Robyn Russell were able to piece together the story of the couple on the recordings:

The Story Continues to Unfold

The project will continue as more research is conducted about the lives and dialect of the Attu people. The recordings can be now be fully transcribed and the music studied. The manual tracking of the final image created by IRENE of the delaminated disc can be completed and the resulting audio and transcription added to the resources. Leslie and Robyn have already located one of the sons of Parascovia and Mike Lokanin, and Leslie will be delivering copies of the recordings to them the next time she is in the city where they reside. (The family had no idea that the recordings existed!)  She also hopes to interview the son to learn more about Parascovia and Mike’s life after they returned from Japan.

The Lokanin Family has requested that the clips of the audio recordings not be included in the story at this time, but the full audio will be available to researchers through the Oral History Program at UAF.

Leslie McCartney comments, “I can't thank NEDCC enough for this work to help us preserve these very precious historical recordings.  We are thrilled that they have been preserved for future generations.  We will be giving copies to the Alaska Native Language Archive and the Aleutian Pribilof Islands Association so that linguists and researchers will be able to listen to a dialect that is no longer spoken by anyone."

“Journal of an Aleutian Year,” Ethel Ross Oliver; University of Washington Press.
(A personal story written by Mike Lokanin is included in the appendix, along with another Attu prisoner of war, Alex Prossoff.)

“Meet Moses Dirks, An Introduction to the Unangam Tunuu Language”

NEW!!
Article about the story in the Alaska Dispatch News:
After 70-Year-Old Records Come to Light, Technology Lets Voices of Attu Be Heard Again

'IRENE' is the acronym for 'Image, Reconstruct, Erase Noise, Etc,.' and was so named because the first sound retrieved with the system during its development at Berkeley Labs was a recording of “Goodnight Irene” by the Weavers, a favorite of Dr. Carl Haber.

Story by Julie Martin with help from Jane Pipik and Frank Cunningham. Special thanks to the Lokanin Family of Alaska. We are grateful to Leslie McCartney, Oral History Curator and Robyn Russell, Collection Manager, Oral History Program, University of Alaska, Fairbanks for their expertise and assistance. Thanks also to Mike Livingston and Millie McKeown at the Aleutian Pribilof Islands Association.

Click on any image for a larger view and all 7 photos.