Boston Institutions Prepare for a Groundbreaking Exhibition of Illuminated Manuscripts

During several months in 2015, it was not uncommon to walk through  the Northeast Document Conservation Center’s laboratories and imaging studios and find oneself in the presence of manuscripts dating from the 13th to the 15th centuries. The glimmer of gold illuminations, the richly colored miniatures, and the precise hand-lettering on centuries-old parchment can stop you in your tracks.

Nineteen Boston area libraries and museums  collaborated to present the first exhibition showcasing illuminated manuscripts in the Boston area – Beyond Words: Illuminated Manuscripts in Boston Collections. The multi-venue exhibition opened at three concurrent venues across the city, and comprised a total of 260 outstanding manuscripts and printed books dating from the 9th to the 17th centuries.  The exhibit was supplemented by an extensive catalog, a three-day symposium, and public programming.

Each Beyond Words exhibition venue emphasized a different thematic focus. 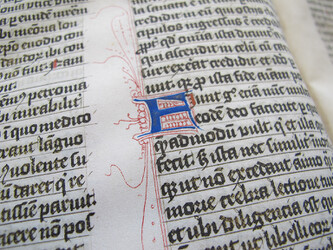 Several manuscripts headed for the Beyond Words Exhibition were brought to NEDCC for conservation treatment and digital imaging in preparation for the exhibit and the exhibition catalog, including manuscripts from the Boston Public Library (BPL) Special Collections, Northeastern University’s Snell Library, and the Brandeis University Archives and Special Collections. 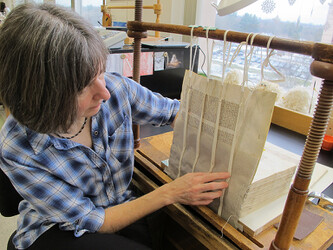 "This 13th century Bible in Latin was one of the first medieval manuscripts acquired for the Boston Public Library, through its partnership with the British Manuscript Society expert Sidney Cockerell," says Melina Schuler, Chief of Communications for the BPL. "The volume is beautifully and extensively decorated, and was formerly owned by famed textile designer, artist, and writer William Morris."

At some point in its past, the illuminated Bible in Latin had been completely disbound, and the loose sections were housed within a 19th century leather binding. The manuscript was digitized in NEDCC’s Imaging department before rebinding. The volume was resewn with linen thread and bound in full alum-tawed pigskin using a non-adhesive, laced-in structure. Secondary endbands were woven with alum-tawed pigskin thongs through the primary sewn endbands for added strength and support.

This volume was on display at Boston College’s McMullen Museum of Art between September-December 2016.

This is the only surviving Dutch illustrated copy of Augustine’s De Civitate Dei (City of God.) Though relatively simple for a 15th century Dutch manuscript, the illumination is uncharacteristically luxurious for an Augustinian house; which usually required a strict, sober aesthetic. The small dragons found throughout the margins of the first three folios—somewhat out of place in

an Augustinian manuscript—are typical of Utrecht illumination. The miniatures in this manuscript have recently been tentatively attributed to Klaas van der Hoek as Antonis Rogiersz uten Broec (fl. 1460s)

The volume had been bound in a late 19th century limp-parchment binding, which was in need of repair. NEDCC’s conservator began by disbinding the volume and removing adhesive from the spine folds.  Tears were mended and handmade paper and parchment endsheets were added.  The volume was sewn through a concertina guard onto linen cords using linen thread, and was bound in full calf leather using a laced-in structure.  Both the Bible in Latin and the De Civitate Dei were housed in custom drop-spine boxes to protect them during storage.

This volume was on display at Boston College’s McMullen Museum of Art between September-December 2016. 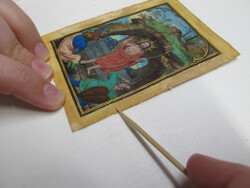 The Boston Public Library also sent fourteen unbound miniatures from a Rosarium Psalter, illustrated by Flemish artist Simon Bening, one of the most acclaimed painters and miniaturists of the period. (1483-1561) His work is renowned for its extraordinary attention to detail, lavish color, and rich decoration. This psalter is believed to have been commissioned for Juana la Loca (“Joan the Mad”), Queen of Castille (1479-1555). Juana was a daughter of King Ferdinand and Queen Isabella of Spain and sister of Catherine of Aragon, first wife of Henry VIII.

One of the treatment challenges for this project was that many of the leaves had illustrations on one side and text on the other. The individual leaves were adhered to brown paper “mats,” some of which partially covered the media in the borders. The various thicknesses of the mats and adhesives caused uneven tensioning of the sensitive parchment, resulting in moderate cockling and splits.  NEDCC’s treatment included assessing the condition and conservation needs for each miniature and customizing each treatment accordingly. Treatment procedures for the fourteen leaves focused on the removal of paper mats and adhesives, consolidating friable and flaking media, and mending.

Custom Framing for the Rosarium Psalter 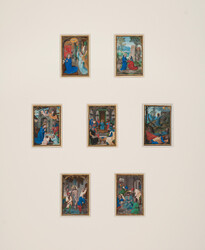 miniatures for researchers. The leaves were mounted and framed, and the matted miniatures were secured in sealed custom enclosures using two sheets of UV filtering acrylic glazing. Custom archival storage boxes were also created for the Rosarium Psalter for safe storage when not on exhibit.

These miniatures were on display at Boston College’s McMullen Museum of Art between September-December 2016.

The digitized images were included in the Beyond Words printed exhibition catalogue, which includes contributions from 85 international scholars, edited by co-curators Jeffrey Hamburger, William P. Stoneman, Anne-Marie Eze, Lisa Fagin Davis, and Nancy Netzer and published by the McMullen Museum. They are also fully available on the library’s digital repository, Digital Commonwealth. 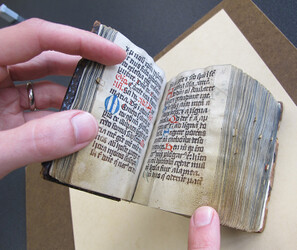 The Snell Library at Northeastern University selected a 15th century Dominican Prayer Book for conservation treatment and digital imaging. (Northeastern English faculty member Erika Boeckler and the graduate students who are studying the manuscript this summer were able to deduce a firmer date span.  According to their research, it was created after 1461 because of the inclusion of certain prayers related to St. Vincent and Catherine of Siena.) “The manuscript contains components of a Book of Hours such as suffrages to various saints, the Little Office of the Virgin, the Office of the Dead, the penitential psalms with a litany of the saints, plus additional prayers and devotions like a ferial psalter and a breviary,” according to the object’s curatorial notes. The palm-sized manuscript of over 500 pages contains only one illustration, that of a grotesque woven into the blue floriated initial “R” on the first page. The text was written in clear Gothic bookhand throughout.

During conservation, the broken endband thread was re-wound and the parchment spine lining of the manuscript was mended. Leather lifting from the binding was re-adhered. The volume was housed in a custom drop-spine box.

Digital images and more treatment information can be found on the repository’s website. 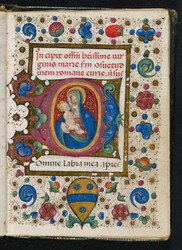 illuminated fragments for digital imaging at NEDCC. “It is remarkable that a school as young as Brandeis has been able to build such an attractive collection of illuminated manuscripts,” explains Sarah Shoemaker, Associate University Librarian for Archives and Special Collections. “The collection is a testament to the generosity of our early donors. Illuminated manuscripts have long been of interest to scholars from Brandeis and beyond, and we are proud to be able to contribute a few from our collection to the Beyond Words Exhibition.”

One of the Brandeis manuscripts digitized at NEDCC was the fifteenth century Officium Beatae Mariae Virginis, which included excellent examples of “inhabited initials,” in which human figures are depicted inside ornately illuminated initials, such as this one, depicting the Virgin Mary holding the baby Jesus inside a letter D.

Digital Imaging of the Illuminated Manuscripts

The illuminated manuscripts for the Beyond Words Exhibition were digitized in the Center’s Imaging studios in compliance with FADGI specifications. Optimum image capture takes place during treatment, and the conservation labs and the imaging department work closely together on projects like these.

"The most challenging part of imaging these manuscripts, and illuminated manuscripts in general, was 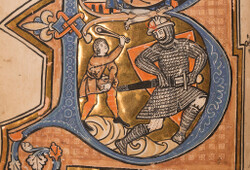 creating images that captured the reflectivity of the gold leaf," explains Terrance D'Ambrosio, NEDCC Director of Imaging Services.  "When imaged under a typical lighting set-up for digitizing paper-based objects, gold leaf renders as a dull brown color, and none of the richness of the gold is captured."

To correct for this, while avoiding other approaches that can be prohibitively time consuming, NEDCC’s photographers developed a method using an auxiliary light source. This additional light was held over the page by the photographer during image capture, with the angle of the light in relationship to the page adjusted slightly to best achieve reflections off the gold, and which were captured in the digital file.

NEDCC was honored to have played a small part in this groundbreaking exhibition. We hope that you were able to take advantage of the opportunity to visit these illuminated wonders at the Beyond Words Exhibition in Boston and Cambridge.

The Beyond Words exhibitionwas supported by a generous grant from the National Endowment for the Humanities as well as by private donors. 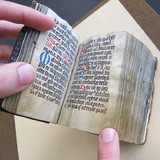 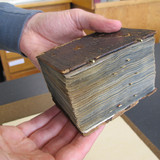 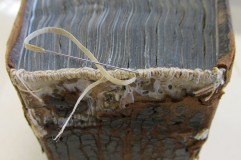 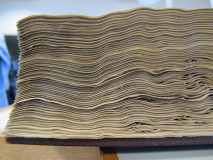 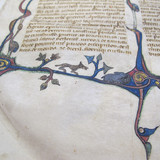 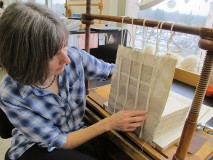 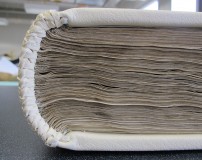 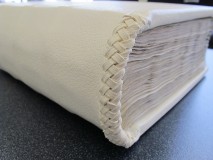 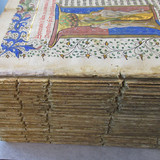 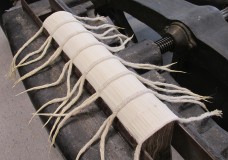 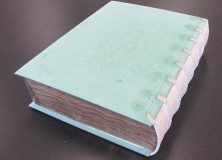 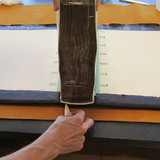 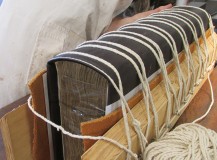 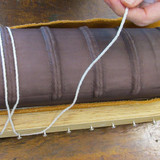 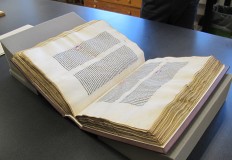 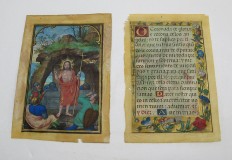 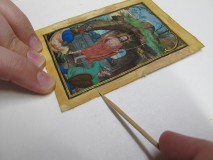 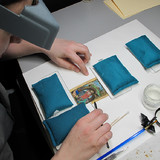 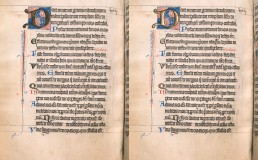 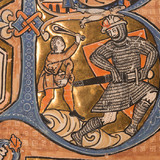 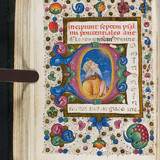 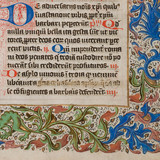