Ghost Signs Before They Were Ghosts

Imagine a beat-up Model T Roadster driving down Centre Street and pulling up near an alley. A man lugs his camera and tripod across the street to photograph the familiar bright red and white advertising sign. “Relieves fatigue! 5¢ Delicious and Refreshing! Sold Everywhere. Drink Coca-Cola.”

Two young pranksters are mugging for the camera and he tries to run them off, but they won’t budge. He takes the shot anyway, and wearily loads up his camera. He might head over to the local drug store soda fountain for a Coke and a ham sandwich before heading out of town, scanning his assignment list for other painted signs as he goes . . .

(Click any image to zoom and view as slideshow.)

America’s business archives usually operate behind-the-scenes, and perform vital functions on many levels – from preserving corporate memory and heritage to retaining the company’s records for continuity in the event of a disaster.

Though the archives can serve the company itself in many ways, America’s business archives also hold collections that are historically significant on a national level. They reflect the important role that American companies have played in America’s history.

The Coca-Cola Archives in Atlanta, Georgia houses a vast collection of Coca-Cola memorabilia, from vintage Coke machines to murals, and from Coke lunchboxes to paper ephemera. The Coca-Cola Journey website offers stories about the history of the company and their articles actively support the preservation of America’s historical collections as a whole.

The Photograph Album — Moments in Time 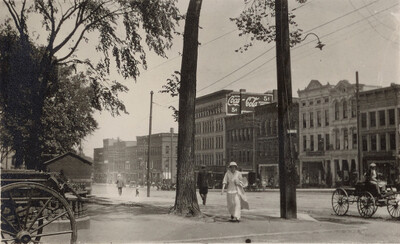 The Coca-Cola Archives recently sent a 1913–14 photograph album to NEDCC for conservation treatment and digitization. The Archives staff is still researching the history of the album, which is comprised of over 1,750 photographs, adhered to 281 pages. The album cover is marked “R.C Maxwell and Co.,” a New Jersey company that specialized in outdoor signs from 1894-2000. The company routinely photographed their advertising signs as a method of recording their clients' projects, but this album is a very early example. Each page displays several snapshots and handwritten captions which indicate the locations of the signs, and they often capture people in mid-stride, going about their daily lives, as in this photograph of 78 Main Street, Northampton, Massachusetts. 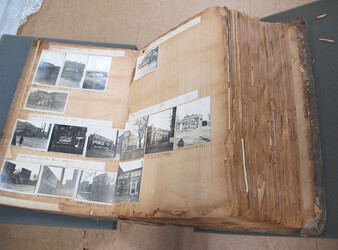 The goal of the conservation treatment and digital imaging project was to provide easier access to the images for researchers. The photograph album has been a highly requested resource at the Coca-Cola Archives – and its deteriorating condition has made it extremely fragile to handle. “We were afraid to turn the pages,” said Ginny Van Winkle, Cataloging Archivist, “pieces of the brittle pages would crumble off every time we touched it.” 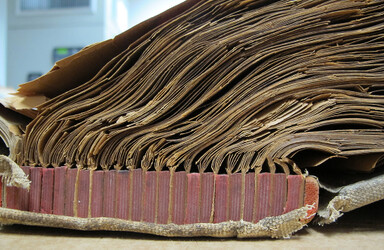 The volume contains a hand-written index by town, which helped in finding a particular photograph, but because the volume is so large, accessing the pages was very awkward.

The original binding was broken. The pages had become loose and many were cockled and discolored. The condition of the pages created an unstable support for the photographs, which are adhered overall to the pages, possibly with a water-based adhesive.

NEDCC’s conservation treatment included collating and checking the pages for completeness; disbinding the volume; and surface cleaning the individual photographs and the support pages. Mending of pages using a light-weight (Usumino thin) Japanese paper and dry wheat starch paste was minimal, and only necessary for stabilization and safe handling during imaging. "Because each page contains captions that were hand-written in water-soluble ink," explains Senior Photograph Conservator Monique Fischer, "removal of the photographs from the leaves was not recommended. It was crucial to preserve the location information with the images. Each support leaf with attached photographs was placed in a MicroChamber ©/ SilverSafe folder, and housed in archival drop-front boxes."

Dry cleaning the support pages with a rubber eraser. 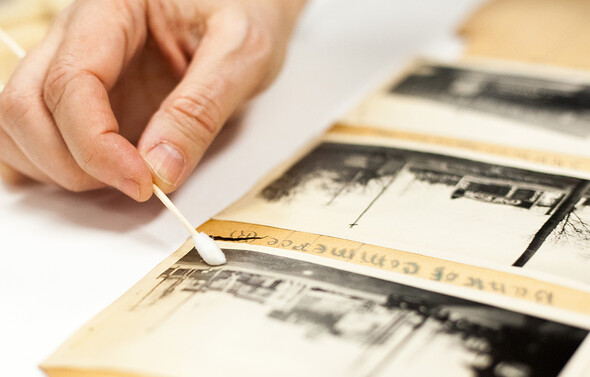 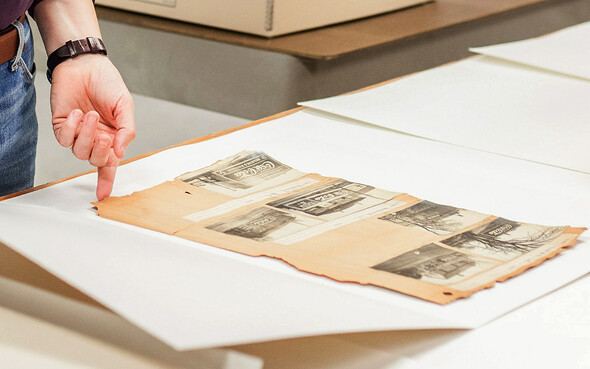 These folders are specifically designed for photographic materials. The exterior is lignin- and sulfur-free, with alkaline buffering and pH of 8.5. The inner surface is a neutral pH non-buffered white cotton paper. The folders provide protection against oxidative and acid gaseous pollutants. 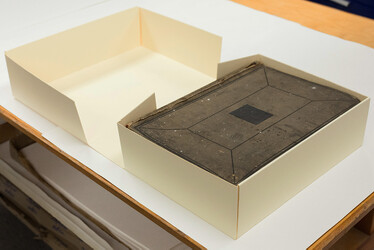 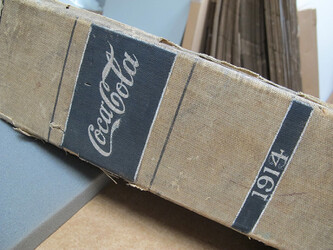 A custom CMI box was created for the original binding, which will be stored with the boxes of photo album leaves. The CMI box protects the binding from handling, pollutants, light, and rapid changes in temperature and relative humidity.

After treatment, the volume was digitized in the Center’s Digital Imaging Studio. The individual pages were now stored in separate folders and able to be more safely handled during imaging. Each page was imaged in its entirety using an 80 megapixel medium format digital camera, allowing the relatively large album leaves to be captured at 400 ppi. "For this project," says Director of Imaging Services Terrance D'Ambrosio, "the imaging staff cropped each image to preserve a narrow border around the edge of the album leaf, but with the high-resolution images, the Archives staff will be able to crop to the individual photographs and their captions at a later date." Digitization will make these images easily accessible while preserving the fragile originals.

The information contained in this unique photograph album can inform a wide range of interests. Historic preservation researchers can use the photographs to locate buildings and intersections and examine facades and structures in detail. Of course, those interested in Ghost Advertising will find a treasure trove of resources here. Many of the Coca-Cola signs are now being restored to their original grandeur by towns and cities across the country, so the detail shown in the photographs can help shape a sign restoration project. 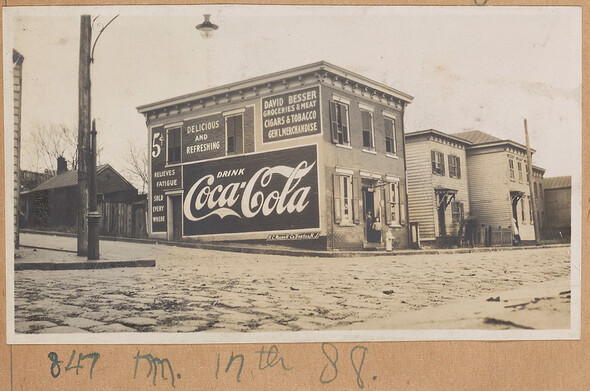 The manager or proprietor was often named on the signs, providing valuable information
for genealogical research and town history. This shot was taken in Richmond, Virginia. 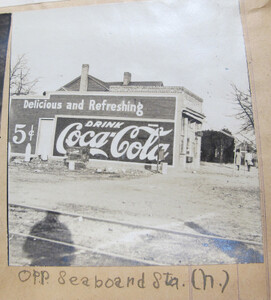 The mysterious R.C. Maxwell staff photographer may have even captured his own shadow in some of the images. (Camden, South Carolina) 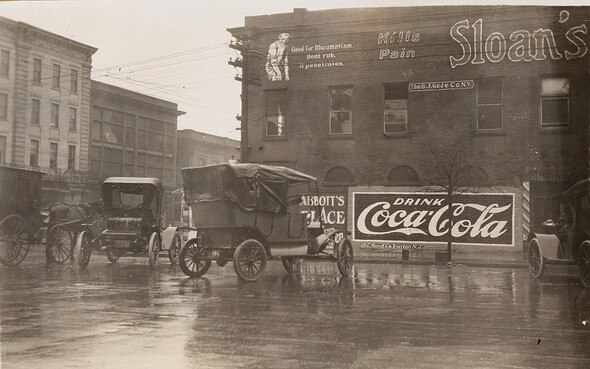 Juxtaposition of motorcars and horse-drawn carriages appears throughout the album,
as in this image from Columbia, South Carolina. 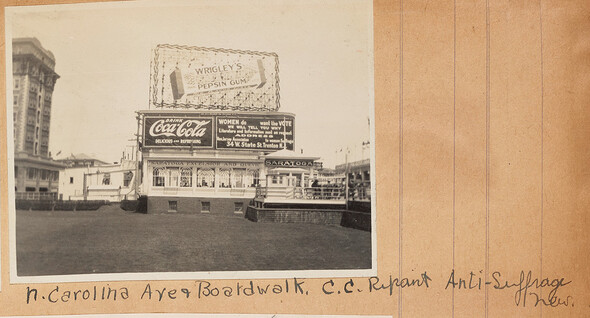 Evolving American history is also captured loud and clear in this startling shot from Atlantic City, New Jersey. The sign appears to have originally read: Women do not want the vote. New Jersey Association Opposed to Women Suffrage." 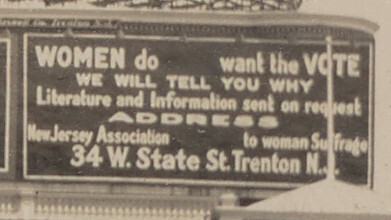 Because of the  the hand-writtten caption: "Repaint Anti-Suffrage new,"
it looks as if the sign painting company was hired to paint over the words "not" and "opposed."
Or . . . another explanation . . .?
(For background, see: New Jersey Women's History, courtesy New Jersey Historical Society) 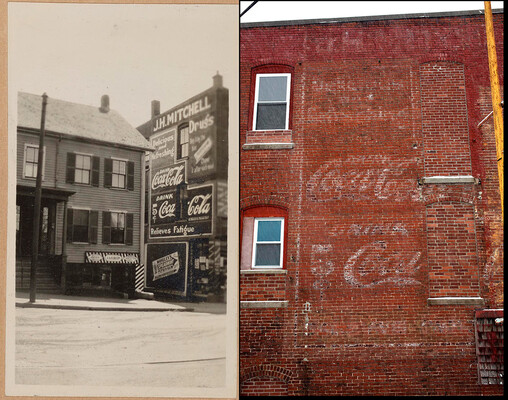 Each photograph in this rare album contains a wealth of information and the research possibilities
are endless. Here is just one example of a Then-and-Now photograph, showing the original sign
and its current view at 194 Winter Street in Haverhill, Massachusetts.
("Now" photograph by David Joyall, NEDCC Senior Photographer.)

The Coca-Cola Archives is dedicated to the preservation of a wide ranging collection of ephemera, objects, and historical records. Their Coca-Cola Journey website is entertaining and educational and provides examples of many of their recent preservation initiatives.