Nineteenth century rare books, daguerreotypes, and twenty-first century digital imaging technology converge to help us glimpse the lives of people in the 1840–50’s.

Todd Pattison remembers the first time a daguerreotype really caught his eye. “A friend who collects nineteenth century photographs alerted me to a daguerreotype that he had seen for sale. There was a young boy in the image holding a book with a striped binding, which I recognized as a particular type of 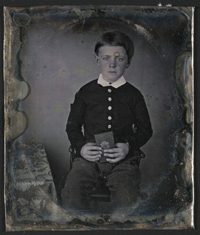 printed pattern cloth that was used as a binding material for only a few years in the late 1840’s. These bindings are quite rare to find today and I was surprised that you could make out the details of the cloth pattern in the photo.” Pattison continued, “The boy was obviously proud of his book and wanted to hold it so that it was visible to anyone who might view the photograph.  It was almost as if he was telling me, ‘Yes, this is a beautiful book.’”

Pattison, Senior Book Conservator at the Northeast Document Conservation Center, is also a passionate book collector with a particular interest in mid-19th century cloth publisher’s bindings. He has become recognized as quite an expert on the topic and has lectured on the subject at Bryn Mawr College, the Library Company of Philadelphia, and the Grolier Club. He will be teaching a course on American Publisher’s Bindings at Rare Book School at the University of Virginia in 2014.

Over the past ten years, Pattison has begun to collect daguerreotypes that feature books in personal portraits. He realized that the books held in the hands of the people in the photographs are often examples of the very cloth publisher’s bindings he has studied. He began to search out these rare photographs and is still in the process of developing the collection. “These books were common objects at the time and did not enjoy the same status accorded them today,” Pattison says, speaking of the young boy holding the book in the daguerreotype. “They were fairly inexpensive and people often gave them as gifts or just bought them to read.  We can easily find examples of the books in present day collections,” he explains. “The beauty of these daguerreotypes is that the light reflected off the subject matter was then captured on the silver coated copper plate. They are as close as we can get to knowing the people who owned these books and they give us a glimpse of how they felt about some of them.”

After deciding to take an even closer look at these photographs, he brought the daguerreotypes to NEDCC’s Imaging Studio to be digitized, resulting in high resolution images which can help him identify particular editions. NEDCC’s photographers understand how daguerreotypes were created, and this helps them capture the highest quality image.  For example, the plates were polished prior to being sensitized creating slight scratches that are all aligned in one direction. NEDCC Senior Photographer David Joyall knows that the clearest image capture of a daguerreotype takes place when the plate is situated so that the polish marks are aligned parallel with the studio lighting. “Because of the reflective nature of the daguerreotypes, we also make sure to mask the camera with black cloth so the reflection does not appear in the image,” Joyall explains further.

"It seems that many of the books in the subjects’ hands were owned by them," guesses Pattison, "especially when they are holding their books in a way that the cover or title is visible." This is in contrast to the stacks of books often seen on side tables in these early photographs, which were used as props in photography studios at the time. By studying subtle details in how people are holding the books, one can imagine that the books they chose to bring to the photography studio were meaningful to them in some way. While there is no high-level science involved in Pattison’s study of these daguerreotypes, it affords a fascinating look into the world of the mid-19th century to see how people identified themselves through the books they chose to include in their portraits.

Click on any image for a larger view and all 10 photos. 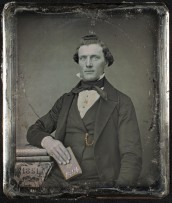 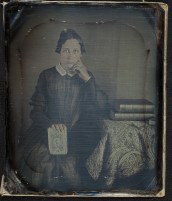 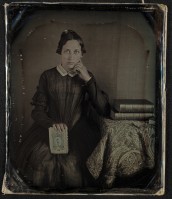 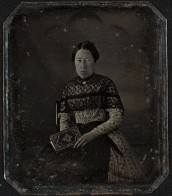 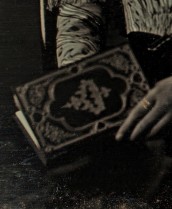 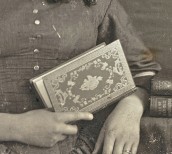 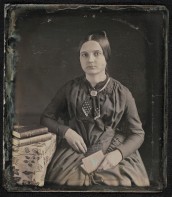 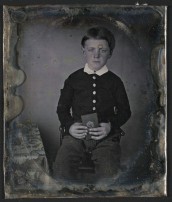 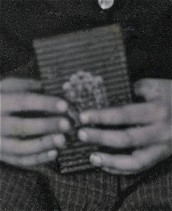 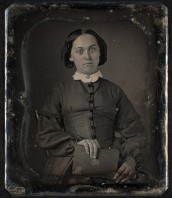