When you drive through the town of Egremont, Massachusetts, there is the distinct feeling that you have somehow driven back in time.  Certainly Egremont’s history goes back much further than its incorporation in 1775, to the original treaties signed along the Indian Line in the 1730’s.   The town figured in the Revolutionary War when General Henry Knox passed through North Egremont in the winter of 1775-1776 to deliver artillery that was used to force the British Army to evacuate

Boston, and was well represented in the Civil War, recently celebrated for the sesquicentennial with a town basket picnic sponsored by the Friends of Egremont History.

Come to find out, that eerie feeling of seeing time stand still is partly due to an intentional initiative by one man during the 1930’s. Major Hugh Smiley established the Olde Egremont Association, which bought and restored historic properties in Egremont as part of a plan for the beautification and economic development of the town after the collapse of the heavy industry that had driven Egremont’s prosperity in the 19th century.  As people looked for motoring destinations in their new automobiles in the 20th century, Smiley was among the first to realize that people enjoyed vacationing in places that looked like “The Real New England.”  The town was preserved to reflect the history of the country in food and lodging and architecture and soon became a destination vacation.

The Egremont Historical Commission (EHC) was established in 1974.   It oversees a local history museum and Town Archives Room as well as performs its civic duties under the Massachusetts Historical Commission.  It is located on the second floor of the 1830’s Mt. Everett Academy building, shared with the Egremont Free Library, in the heart of the National Register Historic District of South Egremont Village.  Among other responsibilities, the EHC is charged with preserving collections in the Archives Room that encompass more than 1,300 books, 16 linear feet of documents, 20 maps, 40+ photographic prints, 20 works of art on paper, 4 oil paintings, and two historic murals that cover 80 square feet of the walls of the room.

The Commission’s current preservation initiative began with their focus on the preservation of several significant volumes in their collection. This was a turning point for the Commission members, who recognized that they could not in good conscience begin to raise funds for the conservation treatment of their rarest books, without first addressing the physical conditions at the Archives Room to which the books would return after treatment.

One of the books is a collection of charmingly illustrated drawings by school children in 1876. The book had suffered water damage in the past and will require conservation treatment to avoid further deterioration.The water damage resulted in mold growth and damage, which should be remediated. It is recommended that the pages then be washed and mended.

Another important volume must be conserved as well - and this one is the treasure of the collection.  Having survived a fire in the 1800’s that destroyed most of the town’s early records, The Proprietor’s Book is the oldest and most precious in the town’s possession and is also in need of conservation treatment. (Not shown) Having been treated in the 19th century, the pages of the Proprietor’s Book were lined with silk, a standard technique of the time.  Now, the silk has deteriorated and conservators have recommended treatment that would include removing the silk and washing and mending the pages.

The Commission learned that a Preservation Needs Assessment could provide the documentation and expertise they needed to move forward.  As with many small town historical organizations, they face the double challenge of preserving their historic buildings, as well as the 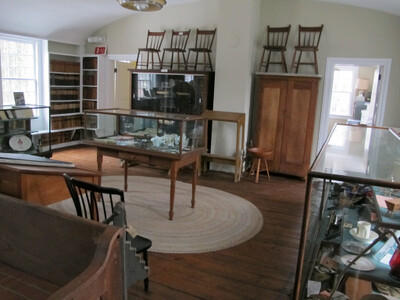 collections within.  In 2012, NEDCC Preservation Services staff visited the Commission, and made detailed notes in order to recommend practical, achievable strategies for the preservation of their collections. They reviewed collection policies, examined building and storage conditions, and reviewed procedures including security, emergency preparedness, and accessions.

The resulting assessment report identified a variety of short-term priorities such as closing curtains to protect collections from light, and improving physical security of collection storage spaces. A list of nineteen mid-term priorities that were identified included activities that might require a bit more planning and organization, such as providing preservation training for volunteers, beginning an environmental monitoring program,  installing window air conditioners, and organizing, rehousing, and describing the archival collections.

The assessment also identified several long-term priorities to be undertaken once the short- and mid-term goals had been accomplished. These included projects such as reviewing the collection management plan annually, installing additional shelving, and orienting new Commission Members to preservation practices and goals to ensure consistent collections stewardship.

Armed with NEDCC’s Preservation Needs Assessment report, the Commission members began ticking off the recommended activities, as well as creating new policies and procedures along the way.

To date the EHC has accomplished the following:

As the Egremont Historical Commission has illustrated, the Preservation Needs Assessment can be the first step in gaining the focus and clarity necessary to create and fulfill a preservation

plan for a small institution’s collections. In addition, the official assessment report is sometimes a requirement for obtaining state and federal funding for conservation treatment projects, and can help make the case for a town or community’s enthusiasm and commitment to its historic roots.

Often, it takes the commitment of a team of volunteers like this to make things happen. The Egremont Historical Commission is well on its way to ensuring the preservation of their unique collections and maintaining the town’s reputation for historic significance.  Back in Major Smiley’s day, the Olde Egremont Association promoted “Olde Egremont” to travelers, seasonal guests, and second homeowners as: “the land of yesterday; settled 1730, restored 1930.” Thanks to the work of the Egremont Historical Commission, I think we can now add: “. . . preserved to 2030” to that proud phrase.

LEARN MORE about the Egremont Historical Commission, and the Local History Museum and Archives Room.

"Just wanted to let you know that we used the NEDCC story as a  handout on Tuesday night at our Annual Town Meeting to promote the repairs of both the School and Academy buildings and the conservation of the books.  The town voted the money to do all the work.  I think your great story explaining to our townsfolk what is being accomplished was very helpful."

Story by Julie Martin NEDCC. Special thanks to Susan Bachelder and the members of the Egremont Historical Commission for their help with this story.  Top photo courtesy of Gregory Cherin Photography.