From Attic to Exhibit

NEDCC often treats composite objects with paper components such as  a rare 1811 terrestrial globe owned by the Hopkinton Historical Society (HHS), Hopkinton, NH. Its history is well-documented and Robert O. Wilson, D.D.S., President of the Board of Trustees of the HHS recounts the globe’s story. “It was purchased by Ebenezer Lerned, M.D. (1762–1831), a graduate of Harvard College and Dartmouth Medical School and the founder of the Hopkinton Academy in 1827, where it is presumed to have been used to instruct the students. Following Lerned’s death in 1831, the globe was willed to Stephen Sibley, Esq., who in turn willed it to Lerned’s daughters, reporting that it had been stored in his attic where it became damaged from water leaking through the roof. In 1873, the daughters gave it to the Philomathic Club, or the NH Antiquarian Society. (The Philomathic Club took the name of the NHAS in 1875, and the NHAS became the Hopkinton Historical Society in 2009.) It has been in the possession of the Society ever since.”

“The globe has a significant link to the Town’s past. Hopkinton briefly served as the capital of New Hampshire in the early nineteenth century, and it was a cultural and manufacturing center. Dr. Lerned was the first medical college-trained physician in Hopkinton and was an advocate of education (hence the Academy) and known for his philanthropy. His house still stands on Main Street, near the Historical Society. Another interesting detail,” adds Dr. Wilson,“ is that the HHS occupies the Long Memorial Building, built in 1890, which was the first purpose-built museum building for a historical society in the United States. It is on the National Register of Historic Places.”

Dated 1811 in small white letters in the Indian Ocean area, the globe is one of the few in existence of this type. Its official name is lengthy: “The New American Terrestrial Globe on which the Principal Places of the Known World are Accurately Laid Down, with the Traced Attempts of Captain Cook to Discover a Southern Continent, by James Wilson, 1811.”

A 1997 article in the Library of Congress Information Bulletin, written by Ronald Grim, Curator of the Leventhal Map Center at the Boston Public Library, noted the globe maker’s history.“James Wilson (1763–1855) was America’s first commercially successful globe maker. Born in New Hampshire, he became a lifelong resident of Bradford, Vermont. Wilson was primarily self-taught in geography, cartography, and engraving and printing techniques of globe production. His globes were known to be up-to-date and accurate as well as being beautifully crafted.

In December 1827, Wilson exhibited his globes at the United States Library in Washington where he distributed business cards with the following notice:

James Wilson was the original manufacturer of globes in this country and has brought the art to such a degree of perfection, as to supersede altogether the necessity of importations of that article from abroad. Members of Congress, as friends of American productions and ingenuity, are respectfully invited to examine these Globes. (Ronald Grim, Library of Congress Information Bulletin, Vol. 56, No.14, September 1997.)

The Wilson globes were composed of paper gores applied over a papier-mâché core with a plaster coating and mounted in a wooden stand. Wilson created celestial globes as well as terrestrial globes, and existing examples are very rare due to their fragile, cumbersome nature as well as to the fact that their maps became so quickly obsolete after production.

The Hopkinton Historical Society’s globe arrived at NEDCC in relatively poor condition. The globe was dusty and had a dark and degraded surface coating. A cleaning test suggested that this coating was an animal glue, which was uneven and chipped off in many areas. There was also some paper loss exposing the plaster substrate. The sphere had numerous hairline cracks, giving the globe a faceted appearance. It rubbed against the horizon ring so that rotating the globe in its stand caused abrasion. The globe was also flecked with small drops of gray paint.

View the slide show to follow the conservation treatment process for this unique object. Now that the globe has been treated, it can be exhibited safely and shared with visitors to the Hopkinton Historical Society. 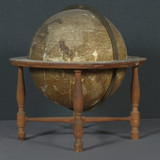 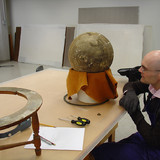 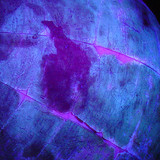 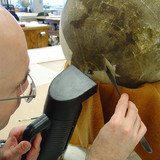 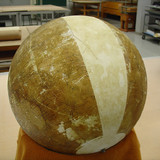 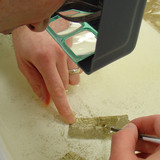 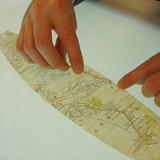 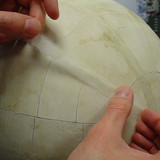 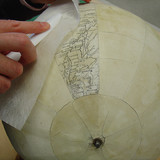 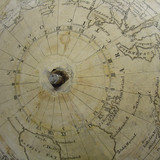 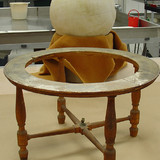 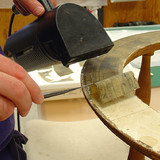 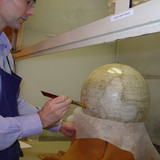 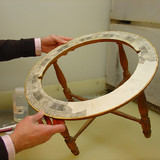 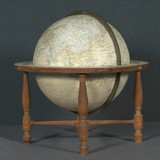