It is 1921.  As you enter the doors of Carnegie Hall for a performance, an usher hands you a program. While waiting for the house lights to go down, you browse the schedule for the evening’s concert.  Perusing the ads in the program, you can decide where to eat after the show, where to store a fur coat or buy a corset, or for those truly inspired by the performance, where to purchase a piano or a violin.  The theatre programs often became keepsakes of a memorable evening at the legendary Hall, and were tucked away at home in a scrapbook or desk drawer.

The Carnegie Hall Archives was established in 1986, in anticipation of the Hall’s 100th anniversary. “A formal decision was made to establish an archive with the goal to curate retrospective exhibitions and to document past, present, and future events,” says Gino Francesconi, Director of the Archives.

The theatre programs formed the basis of the collection at the start, dating back to the first performance at the “Music Hall” on May 5, 1891 with a concert by Tchaikovsky.  Before establishment of the Archives, the collections were to be found in different locations around the 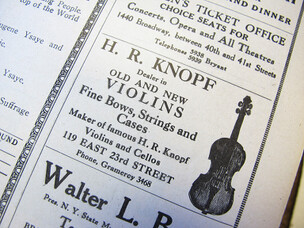 building or displayed in hallways, and there had been no consistency in documenting the Hall’s history. Fortunately, because the printer would regularly bind a batch of programs for the Hall to retain, almost all the programs were accounted for, with only a few gaps throughout the years.

Gino Francesconi began an active search to find the missing issues, including trips to flea markets and antique fairs. But the big push came when the search initiative was mentioned in the AARP monthly magazine.  “Programs came pouring in,” says Kathleen Sabogal, Assistant Director of the Archives.  “Sometimes the person’s tickets were still taped inside the program or notes were scribbled in the margins. We love to have that personal connection to someone’s experience at a performance. The theatre programs are unique snapshots of what was going on in the city culturally at the time. The advertising and the articles are as interesting as the performance listings.”

In addition to the programs, the Carnegie Hall Archives preserves thousands of posters, musical manuscripts, autographs, administrative files, and architectural drawings that tell the story of the musicians, politicians, and world figures that have appeared in nearly 50,000 events since 1891. In 2012, the Archives initiated the Digital Archives Project, with the goal of making much of the collection available online to the public. The multi-year project will preserve and digitize most of the Hall’s historic collections, including all the theatre programs from 1891 to the present day. (See 2019 story update below.)

NEDCC began working with the Carnegie Hall Archives in 2009 when then Director of Paper Conservation Walter Newman visited the Archives to conduct a Collection Condition Assessment prior to the Archives moving into a renovated space within the building.  Guided by recommendations identified in the assessment report, the Archives developed a programmatic approach to the preservation of the collections, including improvements in housing and storage conditions, environmental controls, security procedures, and emergency preparedness. The report also outlined types of materials that should be prioritized for conservation treatment, such as damaged and fragile scrapbooks, unbound damaged programs that had been mended with pressure-sensitive tapes, and unique objects in the Archive’s collection such as the first ticket and programs for the Hall’s earliest concerts. 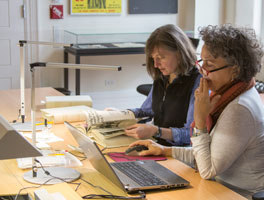 With the conservation of the theatre programs well underway, Director of Book Conservation Mary Patrick Bogan and Associate Conservator Jessica Henze went onsite in 2014 to provide a collection assessment and treatment recommendations for the remaining bound programs from 1952 to 1987. (Concert programs from 1891 to 1951 had already been conserved and digitized at NEDCC.)  In 2016, Senior Paper Conservator Suzanne Gramly also provided an assessment for the collection of architectural drawings.

“The conservation assessments were critical for the Archives,” explains Gino Francesconi, “because they provided necessary information about the health of the collection, and provided documentation for grant applications and project updates.”

The Programs - Conservation and Digital Imaging 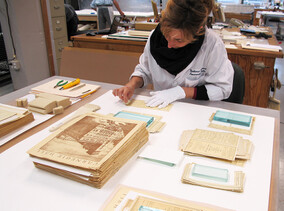 Since 2012, NEDCC has been treating and digitizing the theatre programs in batches, starting with 1891 and continuing to the present.  Some of the early programs were unbound, so the treatment was completed in the Center’s Paper Conservation Laboratory. The bound volumes were treated in the Book Conservation Laboratory where they were carefully collated, disbound, treated, and rehoused. “Groups of programs had been commercially bound into thick volumes, and the methods and materials used were often damaging.  In some cases, the spine folds of the programs were cut away and the programs were oversewn.  As a result, the text was inaccessible."

"The books needed to be disbound and the programs separated so that the information could be accessed and the programs could be safely imaged,” explains Mary Bogan.  Once the volumes were collated and disbound, other conservation treatment steps were performed including surface cleaning to reduce surface dirt, aqueous treatment or alkalization where needed, mending tears. 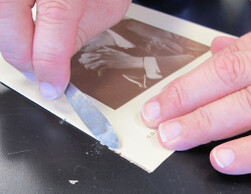 Conserved programs were rehoused in buffered folders and document storage boxes so that staff in the Archives can easily locate and safely handle a single program at a time.

The programs were digitized in NEDCC's Digital Imaging studios following conservation treatment. The imaging process followed the Federal Agencies Digitization Guidelines Initiative (FADGI), producing digital surrogates that will facilitate access to the programs while also serving as a preservation mechanism. While the image capture was largely straightforward, two factors did pose a challenge – the sheer number of pages in a given year’s programs, particularly in programs from more recent years, and the use of complex file naming protocols that facilitated the Archives’ ingest of the files into their repository, but which required rigorous attention to detail from the photographers working on the collection. In total, more than 325,000 program pages were digitized over the course of the project.

The high quality digital images will be available in fall 2018 when Carnegie Hall launches a beta Digital Collections site on the main Carnegie Hall website.  Currently, as part of the “Performance History Search” feature, information on more than 45,000 events can be accessed and searched in a number of ways including by composer, date, venue or genre. The resulting data on the performance schedule comes directly from the programs, and the digital images of the entire programs will soon enhance the resource, allowing users to view the schedule in the context of the ads, articles, and announcements of other cultural events of the day.

Search “Judy Garland” and you can see the songs included in the legendary April 23, 1961 performance which some have called, The greatest evening in show business history.  Search “The Beatles,” and you’ll find their groundbreaking performance on February 12, 1964 during their first visit to New York.  It’s amusing to remember that with their characteristic British wit, they started the show with “Roll Over Beethoven.”

Standing for the Ages

Carnegie Hall has long been more than just a performance space in the cultural hub of the nation. It has earned a place in American history as a venue that has hosted music of all genres from all over the world, as well as notable lecturers and activists, politicians and presidents.

It is built to stand for the ages, and during these ages it is probable that this hall
will intertwine itself with the history of our country. All good causes may find here a platform.
- Andrew Carnegie

"In 2012, the Archives entered a new chapter in its development with the launch of a Digital Archives Project. This initiative has enabled Carnegie Hall to digitize most of its historic materials—many of which were previously available only on paper or in obsolete media formats—ensuring that the Hall’s legacy is preserved for future generations. It has also created a dynamic digital repository designed to house digital legacy collections and to capture new content and materials developed by Carnegie Hall in support of its artistic and educational initiatives. In 2013, searchable program information from 1891 through present was made available to the public for the first time through the Performance History Search, continuously updated on the Carnegie Hall website. As a result of the project, archival materials and information have been made accessible in a much greater way—both on-site at Carnegie Hall and online—in support of the Hall’s mission, serving the widest possible audience.

Since the project’s start, the Archives has worked with the Northeast Document Conservation Center (NEDCC)—the first independent laboratory in the US specializing in the conservation and preservation of paper- and film-based collections—to conserve and digitize bound and loose programs to 1953, as well as architectural drawings, photos, and lacquer audio discs. Much of Carnegie Hall’s legacy collection has also been digitized on-site by digital photographer Ardon Bar-Hama, who was selected based on his work on projects including the Codex Vaticanus-Biblioteca Apostolica at the Vatican in Rome; The Dead Sea Scrolls in Israel; as well as the New York Philharmonic Archives and the Manuscript Collection of The Juilliard School in New York City. Additional digitizing and reformatting work has been done by other highly-skilled and specialized vendors including ColorLab, and The MediaPreserve. An in-house team of five Carnegie Hall archivists are responsible for the ongoing cataloguing and digitization of the Hall’s ever-growing historical repository.

The Hall’s new Digital Collections has been made possible by generous funding by Carnegie Corporation of New York, Susan and Elihu Rose Foundation, and The Andrew W. Mellon Foundation. Public support has been provided by the National Endowment for the Humanities."

(Click to view as a slideshow or scroll down.) 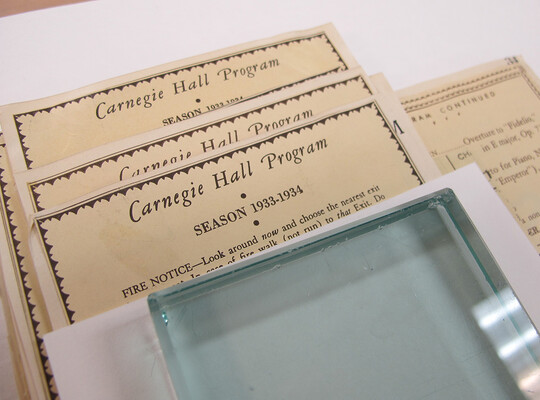 The theatre programs, starting with the first performance in 1891, formed
the basis of the Carnegie Hall Archives, which was established in 1986. 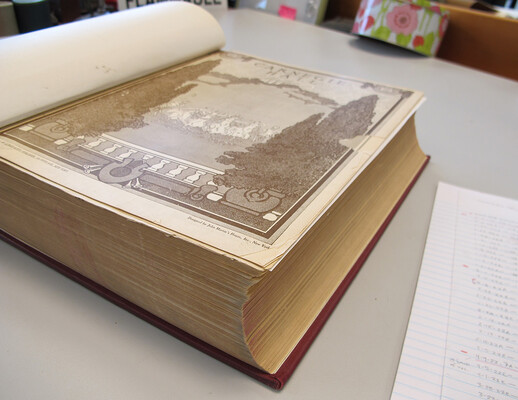 Because the printer would regularly bind a batch of programs for Carnegie Hall to retain,
almost all the programs were accounted for. Groups of programs had been commercially bound
into thick volumes, and the methods and materials used were often damaging. 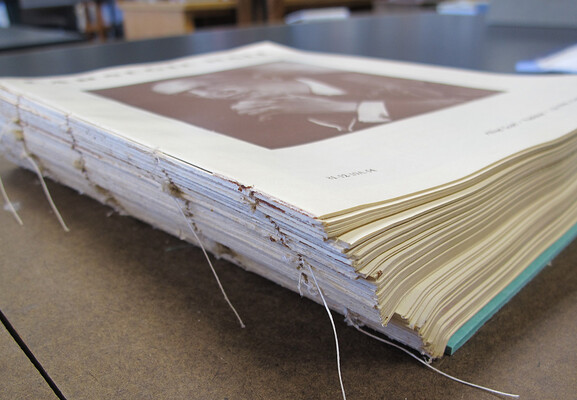 The volumes were carefully collated and disbound for conservation treatment and to provide
optimum conditions for digitization. The programs were individually foldered and housed
in archival boxes. The digital files will be available on the Carnegie Hall Archives website. 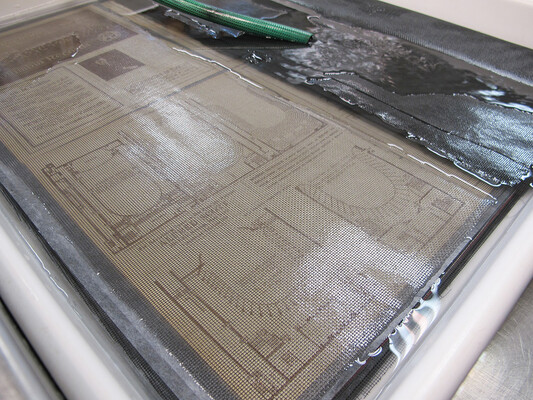 After testing inks for solubility, many of the programs were treated aqueously
to reduce stains and acidity. 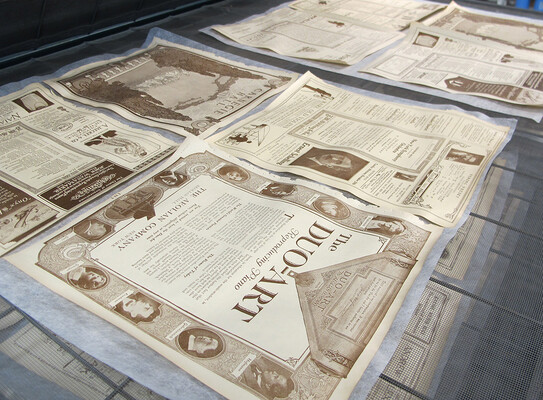 After washing, the programs were air dried on drying racks and then flattened. 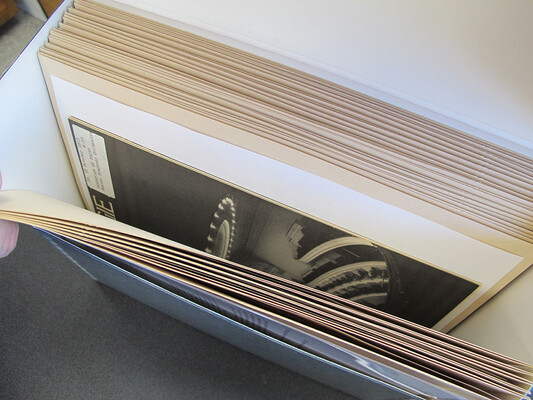 Conserved programs were rehoused in buffered folders and document storage boxes
so that staff in the Archives can easily locate and safely handle a single program at a time. 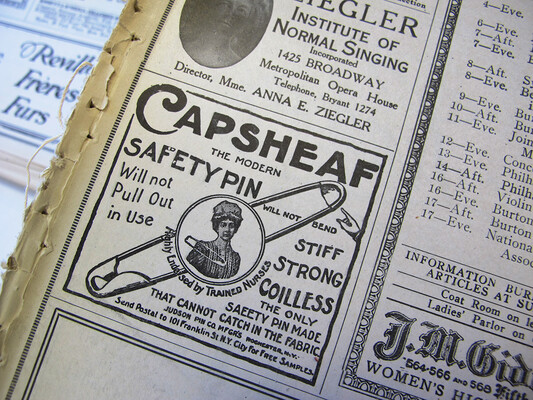 “The advertising and the articles are as interesting as the performance listings.”
- Kathleen Sabogal, Assistant Director, Carnegie Hall Archives 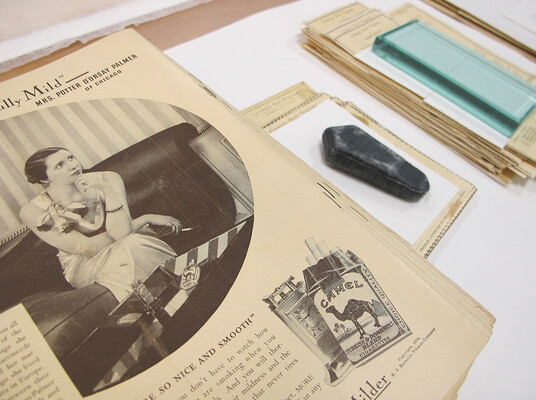 The program ads record the cultural and social history of the time. 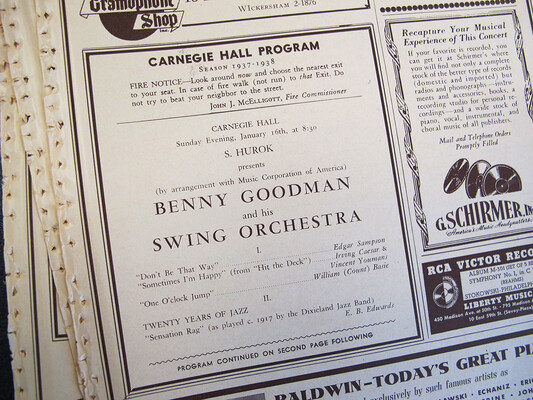 Many historic musical events were documented in the program schedules,
from classical to jazz to rock ‘n roll. 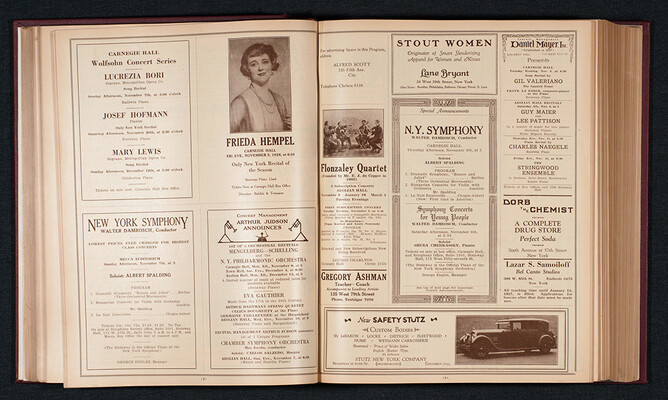 Each two-page spread in the Carnegie Hall programs offers a wealth of
interesting historical and cultural details.

Story by Julie Martin, NEDCC, with help from Mary Patrick Bogan and Terrance D'Ambrosio. Many thanks to Carnegie Hall Archives' Kaltheen Sabogal and Gino Francesconi for their collaboration.