From January to November 2014, NEDCC maintained the IRENE Seeing Sound Blog to record the progress of the Pilot Project for the new IRENE Audio Preservation Service at NEDCC.

History of the Project

In 2013, the Northeast Document Conservation Center was awarded a $250,000 National Leadership Grant from the Institute of Museum and Library Services to develop, test, and demonstrate a new digital reformatting service for early audio recordings on grooved media using IRENE, a system developed by the Lawrence Berkeley National Laboratory in collaboration with the Library of Congress.

During the grant project, NEDCC worked closely with Dr. Carl Haber, Senior Scientist, and Dr. Earl Cornell, Computer Systems Engineer, at Lawrence Berkeley National Laboratory, who led the prior grant-funded initiatives that developed the IRENE technology. In late 2013, a 2D/3D non-contact optical scanning system was assembled at NEDCC's facility in Andover, MA.  Dr. Cornell served as Berkeley Lab's principal point-of-contact with NEDCC throughout this project and was instrumental in training NEDCC’s audio staff and in making important upgrades to the software. 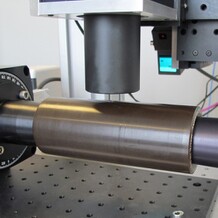 Foundation, and the Woodberry Poetry Room at Harvard. The pilot partners generously offered their amazing collections on which we tested the IRENE system at NEDCC.

It was a year full of exciting discoveries and goose-bump moments in the Audio Preservation lab at NEDCC. We have told the story of many of those moments and included sound clips for your listening pleasure. Enjoy!

NEDCC is grateful to the Institute of Museum and Library Services for their support of the IRENE Audio Preservation project.