Conservation Treatment of the university of illinois Kelmscott Chaucer

The NEDCC Book Conservation lab recently completed conservation treatment of a large volume in a plain quarter-cloth and paper binding. The simplicity of the binding belies its spectacular contents – William Morris’s “Kelmscott Chaucer” – but it is the binding in which the volume was issued. 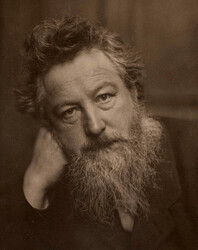 William Morris (March 24, 1834 - October 3, 1896) was an English textile designer, artist, writer, and socialist associated with the Pre-Raphaelite Brotherhood and the founding of the English Arts and Crafts Movement.

In 1890, Morris established the Kelmscott Press in premises near his last home at Kelmscott House in Hammersmith. His goal was to produce books that embodied his ideals in their combination of design, artistry, materials and workmanship.

The Works of Geoffrey Chaucer, published in 1896, was both Morris’s last completed project before his death, and the finest expression of his ideals produced by the Kelmscott Press. 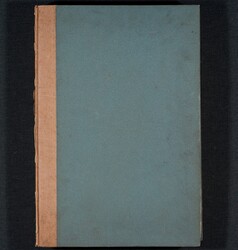 The Press printed 425 copies on handmade paper and 15 on vellum. Of these 440 copies, approximately 50 were bound in full alum-tawed pig skin by Doves Bindery and the remaining copies were bound in quarter linen with blue paper sides by J. & J. Leighton. Many of the comparatively humble cloth and paper bindings have been replaced over the nearly 120 years since the book was issued, some because they were worn and failing, and others because of a preference for grander bindings on this tour-de-force of printing and design.

For this copy, both the NEDCC book lab staff and the Rare Book & Manuscript Library at the University of Illinois were committed to maintaining the original binding. When the 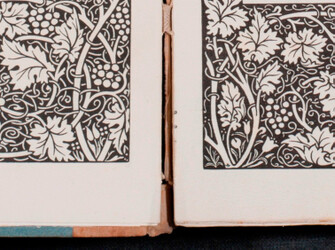 book arrived at the Center, the boards were bowed, the cloth was worn and split, the paper label was fragmentary and the endleaves were loose. On the plus side, the text block was pristine and the sewing and board attachment were intact, so we designed our treatment to leave them undisturbed.

The linen spine was adhered directly to the spine of
the text block and served as the only spine lining, so
as the linen failed, the functionality of the binding was compromised. We addressed this by applying a Japanese paper lining to stabilize the text block and to reinforce the attachment of the endleaves. We then rebacked the volume with toned airplane linen that extended onto the boards underneath the original linen. This provided both strength and a sympathetic appearance in the small areas where the original material is missing.

These necessary interventions were executed entirely from the outside of the binding using only toned airplane linen, Japanese kozo paper and wheat starch paste.  All of the original substance of the binding, except perhaps a little adhesive, was retained.

By taking a subtle approach to the treatment of this important work we were able to retain its appearance while improving its stability and functionality. "The Kelmscott Chaucer is frequently used in a wide range of classes at Illinois, from medieval literature to book history to art and design," comments Anna Chen, Curator of Rare Books & Manuscripts at the University, "and we are thrilled that it can live on for future generations of students and scholars." 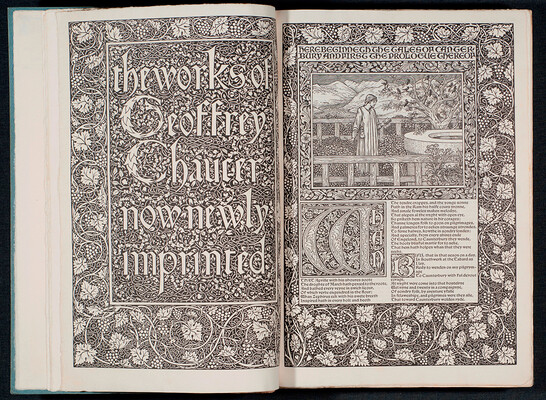