On the night of April 18, 1775, silversmith Paul Revere left his small wooden home in Boston's North End and set out on a journey that would make him a legend. Today that home is still standing at 19 North Square and has become a national historic landmark. Built in 1680, it is downtown Boston's oldest building and one of the few remaining from colonial America. Paul Revere owned the home from 1770 to 1800.

Paul Revere’s home life is an important part of the educational programming for school groups at the Museum. Much of what is known about the Revere family’s life has been drawn from a very few surviving family documents and letters. The museum shop offers resources for teachers, including Paul Revere in Primary Sources, a classroom curriculum packet containing facsimiles of primary source documents related to Revere, as well as their transcriptions.

One of the letters included in this packet is a personal letter from Revere to his wife Rachel. Addressed to “My Dear Girl,” the letter, dated May 2, 1775, contains Paul Revere’s instructions to his wife urging her quick escape from Boston after his ride, and suggesting what to bring with her. “Send the most, most valuable first,” he writes, and adds a personal request, “I want some linens and stockings very much.” At the bottom of the letter is a note to his son, which starts, “It is now in your power to be serviceable to me, your Mother, and your self.” The son was instructed to stay behind until he was sent for, and the note was signed, “Your loving Father, PR.” This letter, originally published as a transcription in 1891 in The Life of Colonial Paul Revere by Elbridge Henry Goss, had long been thought to be lost.

Recently, an individual brought a box of materials to the Revere House for Executive Director Nina Zannieri to have a look at. She was handed a fragile, deteriorated letter, and as soon as she looked at the first line, she recognized it. She quickly compared the letter with the transcription in Paul Revere In Primary Sources and confirmed that this was indeed the lost letter to Rachel Revere. Staff members remember that she ‘went white.’  She explains her excitement, “We at the Paul Revere House care deeply about the content of this letter. We form attachments to those pieces that we think say something important or have special meaning. Before this, the letter was disembodied content. Now, to know that the actual letter had survived was like reconnecting with an old friend!”

Conservation Treatment and Digital Imaging of the Paul Revere Letter

Nina Zannieri could see that the letter was in rough shape. It had long ago been folded, but at some point it had been flattened and lined. There were quite a few dark stains from adhesives used in the past, and a few losses in the paper. Ms. Zannieri felt very strongly that something should be done to conserve it, and she hated to think that this letter might be lost again — this time to deterioration. She immediately offered to help the individual have it professionally conserved by acting as the go-between with conservators at the Northeast Document Conservation Center (NEDCC) in Andover, MA. Paul Revere Memorial Association Curator Edith Steblecki personally brought the letter to NEDCC in Andover for examination and treatment.

“The letter had been lined with a coarse cloth that was attached with an unknown adhesive,” Walter Newman, Director of Paper Conservation, explains. “The adhesive had penetrated the document unevenly and created dark and translucent patches throughout. There were breaks along the old folds and the tiny handwriting went right to the edge of the paper.”

Walter Newman describes the treatment: “After testing the inks to make sure they would permit washing, the letter was humidified and immersed in a filtered water/alcohol bath followed by a bath of pure filtered water to clean the paper and reduce acidity. We follow this washing sequence when, as in the Paul Revere letter, iron gall inks are present that might flake due to uneven wetting.” The bath softened the adhesive that attached the cloth backing and allowed it to be removed without damaging the paper. Removing the backing revealed the long-hidden inscription: “to Mrs. Rachel Revere at Boston.”

NEDCC conservators tried many techniques and materials to remove the remaining adhesive stains, but none were successful. In the end, these adhesive residues were left in the paper. They do not appear to be damaging to the paper or ink and are more of an aesthetic problem than a preservation one. “Ultimately we decided to leave this significant document alone rather than subject it to experimentation with more drastic measures,” said Mr. Newman. NEDCC conservators, like all professional conservators who subscribe to the ethical standards of the profession, will not endanger the current or long-range stability of a document in order to improve its appearance.

The Paul Revere letter was digitized in NEDCC’s Imaging Studios, creating a high-resolution digital file which can be printed for exhibit, used in school programs, or for publication in the Revere House’s teaching curriculum. With the owner’s generous consent, the letter will continue to amaze and instruct school children who visit the Paul Revere House.

Nina Zannieri comments on the value of conservation treatment and imaging of this rare document. “The beauty of this find is that we will now be able to verify the accuracy of the transcription and to use a digital facsimile of the letter in the curriculum and for exhibit. Making sure that the piece was stabilized and digitally imaged was critical.”

Ms. Zannieri believes that teaching history is much more effective when the original materials are used. “When we use quotes from a document, we are literally sharing someone else’s voice — and it reaches back in time and makes it personal. The enduring value of an original document is that it tells a lot about a person’s character in how they shaped their letters and how they held the paper. It is the power of the real thing.”

The Paul Revere House is open year round and has an active schedule of events.

To learn more about upcoming events or to plan a visit: www.paulreverehouse.org

"The Paul Revere Memorial Association is pleased to announce that is has now acquired this important letter, by arrangement with the Reynolds Family Trust and thanks to the help of a group of generous donors. We are delighted to be bringing this one-of-a-kind Revere family document "home" to the house where it was first read in 1775." (From the Fall 2014 Revere House Gazette)

The Paul Revere House is supported in part by the Massachusetts Cultural Council. 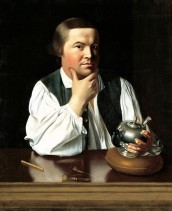