Conservation Treatment and Digitization of William Bradford’s Of Plimoth Plantation, 1630–1650

The Bradford Manuscript is one of the great treasures of the State Library of Massachusetts. In fact, it is a national treasure. It’s the document that tells us who was on the Mayflower and it contains the earliest surviving copy of the Mayflower Compact. It’s an indispensable source of information about the settling of New England . . . and we took it apart.

Here’s the story of how and, more importantly, why we did such a thing.

About the Bradford Manuscript

William Bradford came to these shores in 1620 aboard the Mayflower and was appointed governor of Plymouth Colony in 1621. In 1630 he began to write an account of the origins and early years of the settlement. He called his account “Of Plimoth Plantation,” but we know it today as the Bradford Manuscript.

The Bradford Manuscript is a volume of approximately 580 pages hand written in iron gall ink and bound in a parchment-covered binding. It is impossible to know for certain how the volume looked while Bradford was working on it, but it is evident that it has passed through many hands and been changed in many ways since his time.

When it arrived at NEDCC, the manuscript contained not only William Bradford’s text, but annotations added by the 18th-century scholar and clergyman Reverend Thomas Prince, several documents that were not original to the text but that had been bound into the volume at a later date, and 19th-century end leaves with manuscript text describing the history of the volume. The binding also showed signs of having been significantly modified, probably in the late 19th century around the time of its repatriation after a more than 100 year sojourn in England. There was evidence of two generations of paper repair, as well as more recent sewing and binding repairs. This complex history is now part of the story told by the manuscript.

Goals for the Project

The State Library’s goals for the conservation of the Bradford Manuscript were to improve public access to this significant and well-loved resource, and to protect the volume from further 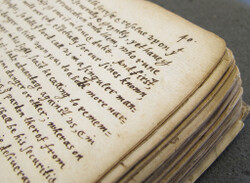 deterioration. As we developed the treatment and digitization plan with Massachusetts State Librarian Albie Johnson, and Head of Special Collections Beth Carroll-Horrocks, we came to understand that it was important to them that we find a way to address the many condition issues without significantly altering either the appearance of the book or the experience for a researcher using the book.

A few of the condition problems were obvious and a few were not so obvious. It was evident that the front flyleaves were brittle and breaking loose from the binding, that one group of text pages was out of alignment with the rest of the text, and that one of the added documents was too large to fit safely within the binding. It was also apparent that the Mayflower Compact pages, which were exposed while the book was on display for many years, were dirtier than the rest of the pages and that the spine of the binding was creased and splitting at the corresponding location.

Less apparent, but no less important, was the slow paper degradation caused by the acidity of the iron gall inks, and the discoloration of the pages caused by earlier paper repairs which, while well executed, were made using poor materials.  Also, the cover boards of the manuscript are barely larger than the size of the pages so that the damaged sewing and weak spine allowed the pages to protrude beyond the covers, making them vulnerable.

To address these condition issues, we developed a plan that involved taking apart the volume, washing and mending the pages, stabilizing the binding and reassembling the volume. To meet the Library’s goal of improving access, it was imaged at two points in the treatment process. Images were taken before the volume was disassembled and again after the leaves had been washed and mended but before it was reassembled.  (See the Photo Gallery for images of the conservation treatment process.) 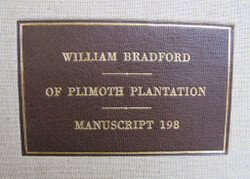 The Bradford Manuscript – Preserved for Future Generations and Accessible Today

The Bradford Manuscript is now safely housed in a custom-designed box at the State Library of Massachusetts following conservation treatment and digital imaging at NEDCC. Two facsimile volumes printed from the digital images captured at NEDCC are available at the State Library for patron use. The volume’s digitized version is now available online.

The State Library secured funding for the project through the LSTA (Library Services and Technology Act) Preservation of Library and Archival Materials Grant, as administered through the MBLC (Massachusetts Board of Library Commissioners).

NEDCC is grateful for support from:

Click on any image for a larger view and all 22 photos. 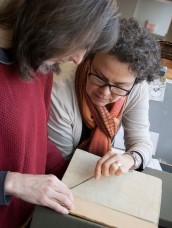 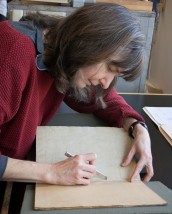 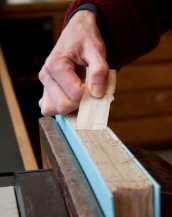 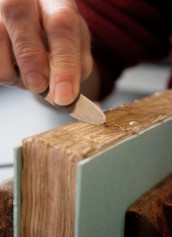 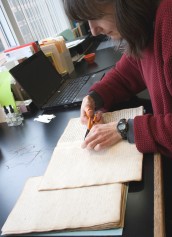