Women, often portrayed as secondary characters in the city’s formation, were actually key to the establishment, survival, and growth of St. Louis. The exhibit showcases women who made an impact in St. Louis before gaining the vote in 1920. Through an engaging mix of artifacts, images, media, and interactives, Beyond the Ballot explores women’s unique roles in St. Louis history. One major element of the exhibit traces the long history of the fight for woman’s suffrage in St. Louis and the events leading up to the passage of the 19th Amendment in 1920.

Broadsides have been used throughout history as posters, announcements for news or events, or as advertisements. Usually printed on one side, they were popular from the 16th through the 19th centuries. Produced on poor quality paper, they were intended as temporary documents. The Missouri Historical Society’s group of broadsides consists of a series of 35 numbered statements by the National American Woman Suffrage Association. While this set of broadsides may have been carried in suffrage parades, it’s more likely that they were used at lectures, rallies, conferences, or other speaking engagements.

The broadsides were fastened to a 34-inch wooden scissor clamp. 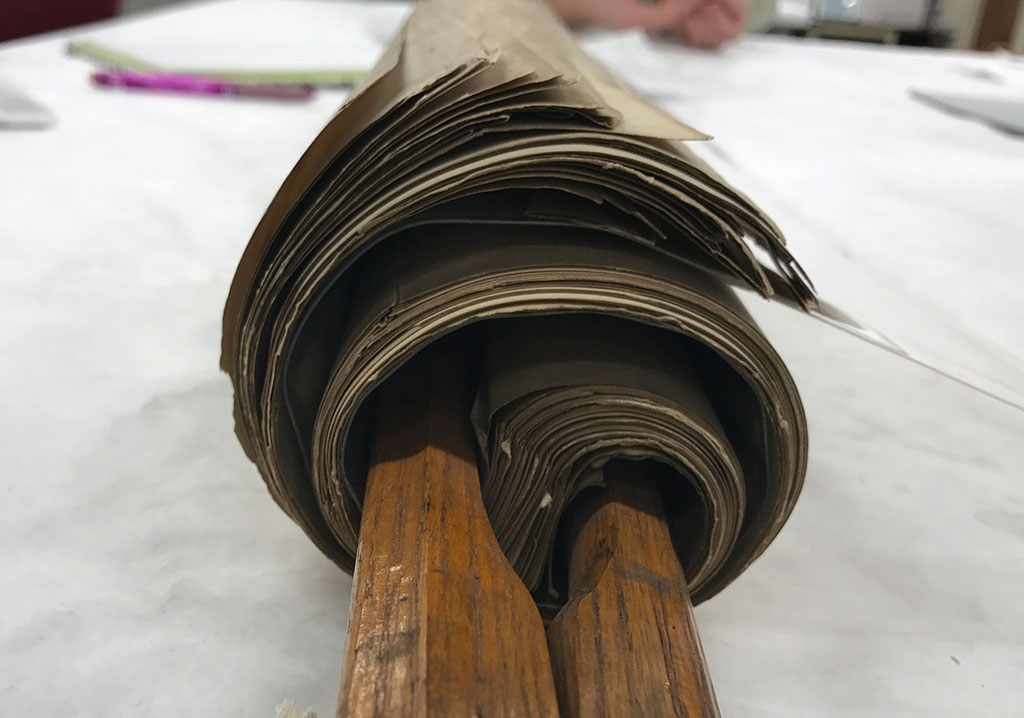 The broadsides were tightly rolled around the clamp.

The clamp is made of two long pieces of varnished wood,
hinged at one end and fastened together with a brass thumb screw. 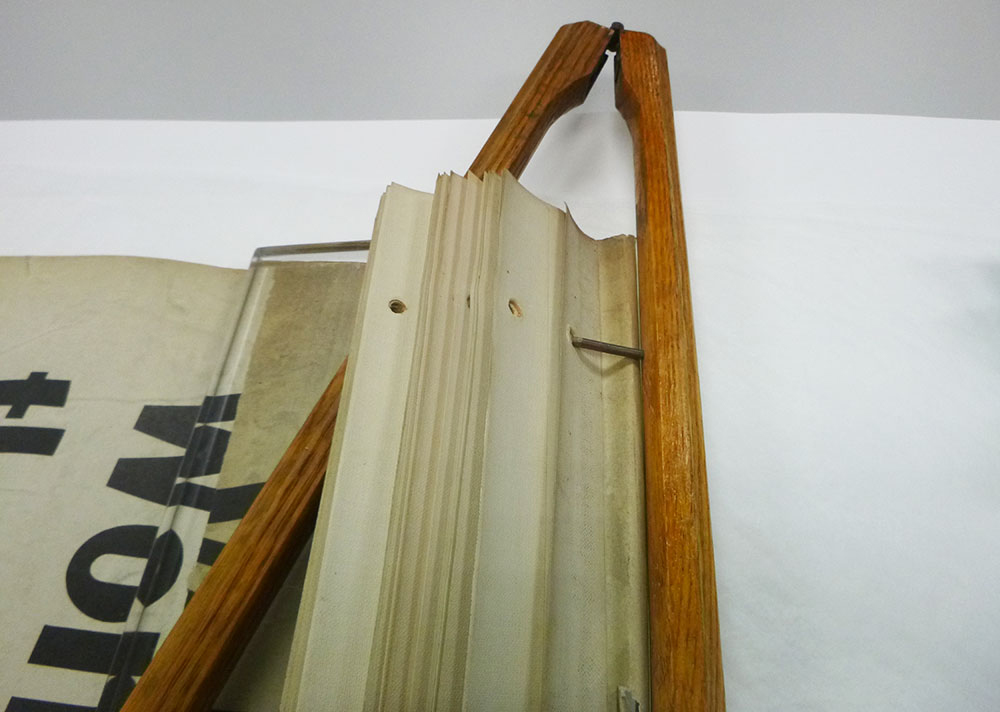 The top edge of each broadside was lined on the reverse with a 1-inch wide band of linen tape.
The broadsides were attached to the clamp through punched holes and fastened to two metal pins. 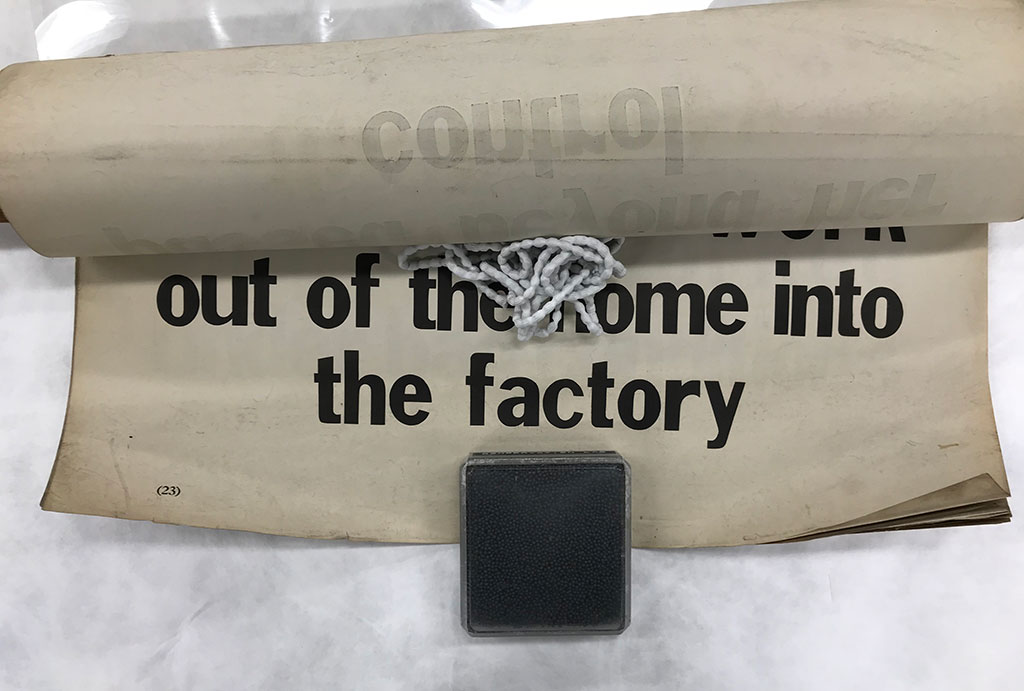 The paper used is a cream white wove paper 19 1/2″ x 24″ and printed with a rich black ink in bold font lettering. The paper had a strong curl from being rolled, but could be weighted and unrolled for examination. 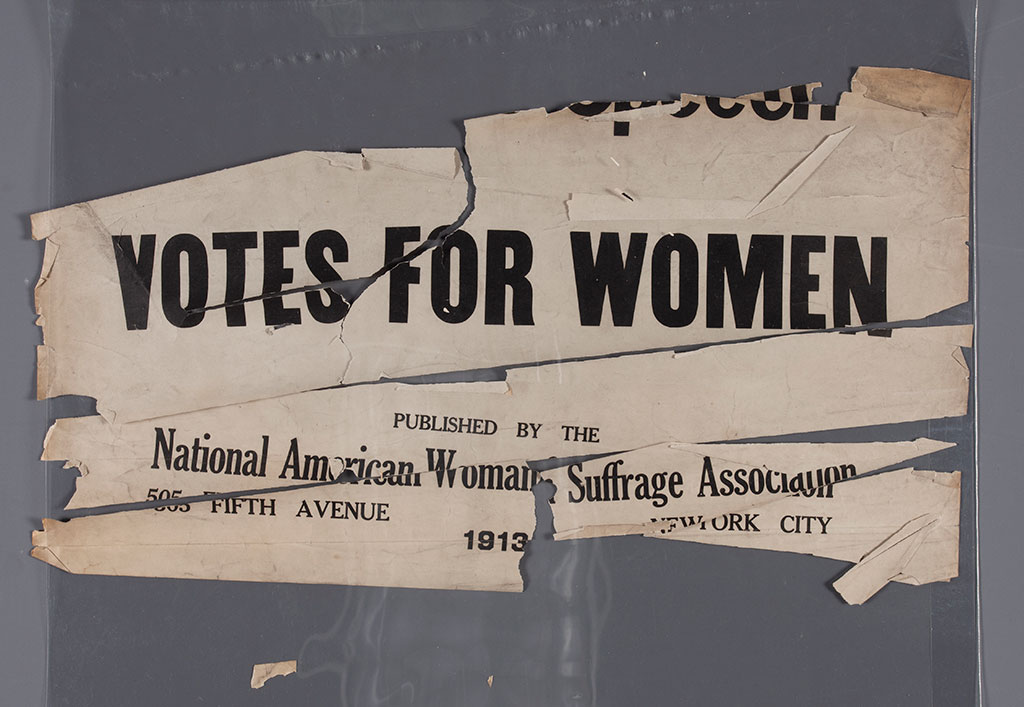 The cover page had sustained the most damage from handling over the years. The entire object was in poor condition as the paper was very brittle and easily broken. All edges were torn and tattered and had slight discoloration to a pronounced brownish tone along the margins. 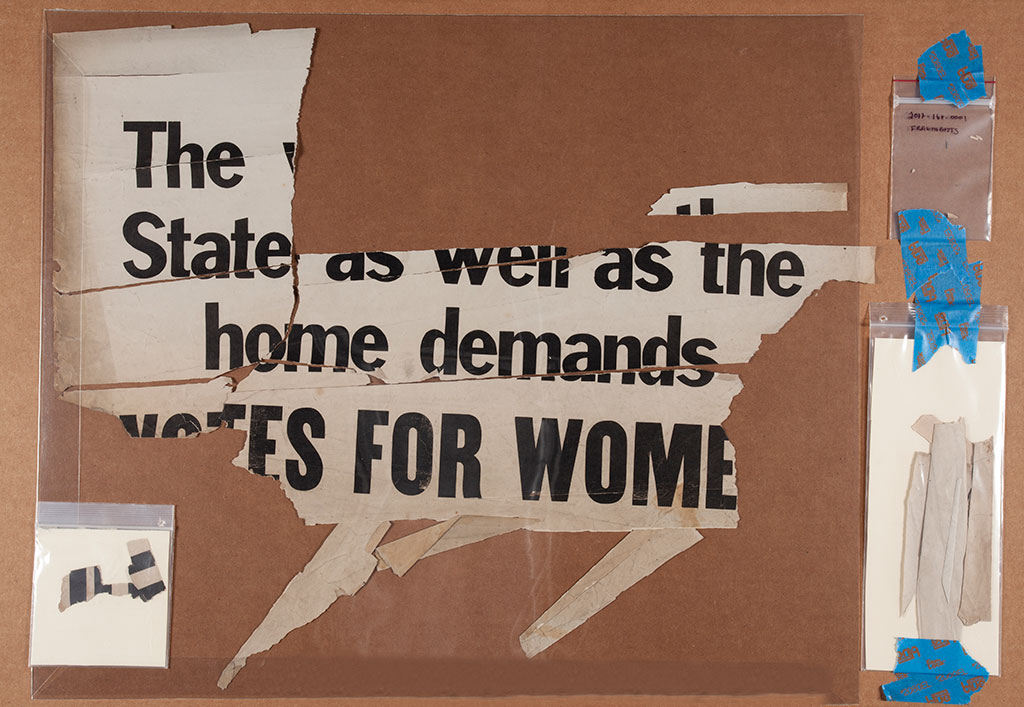 The lower edges of the first ten broadsides were heavily damaged with tears, folds and creases, as well as numerous losses in the paper support. 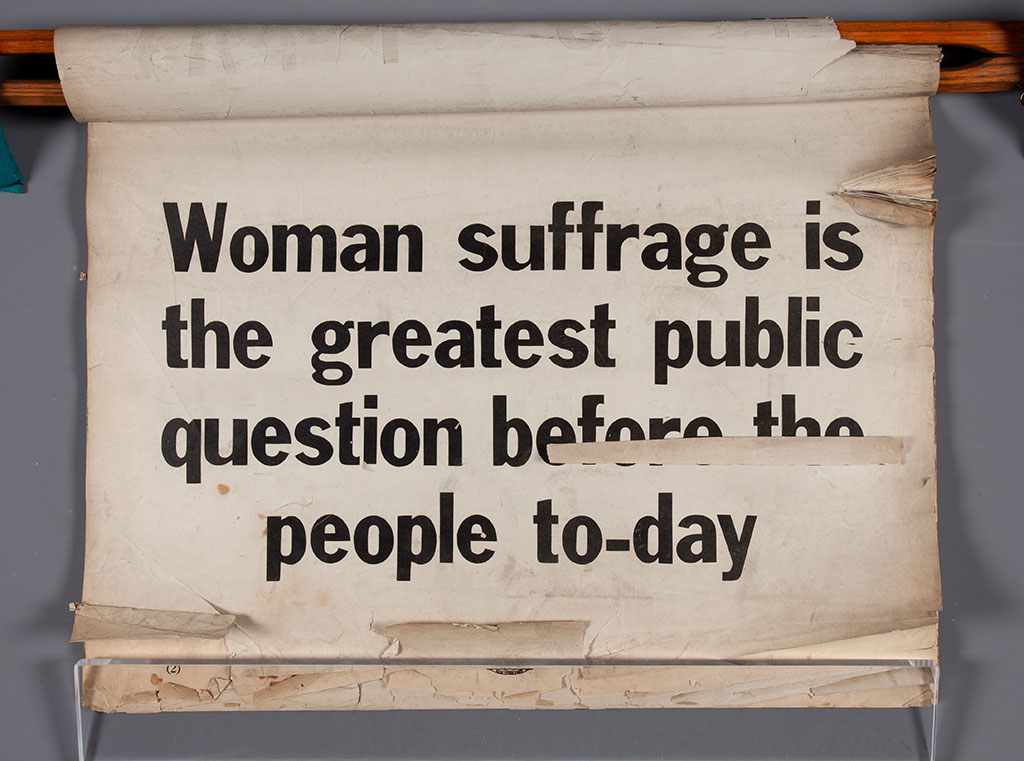 The upper right margin was severely gouged across 2 1/2-inches almost through the entire stack of papers by multiple tears and folds. 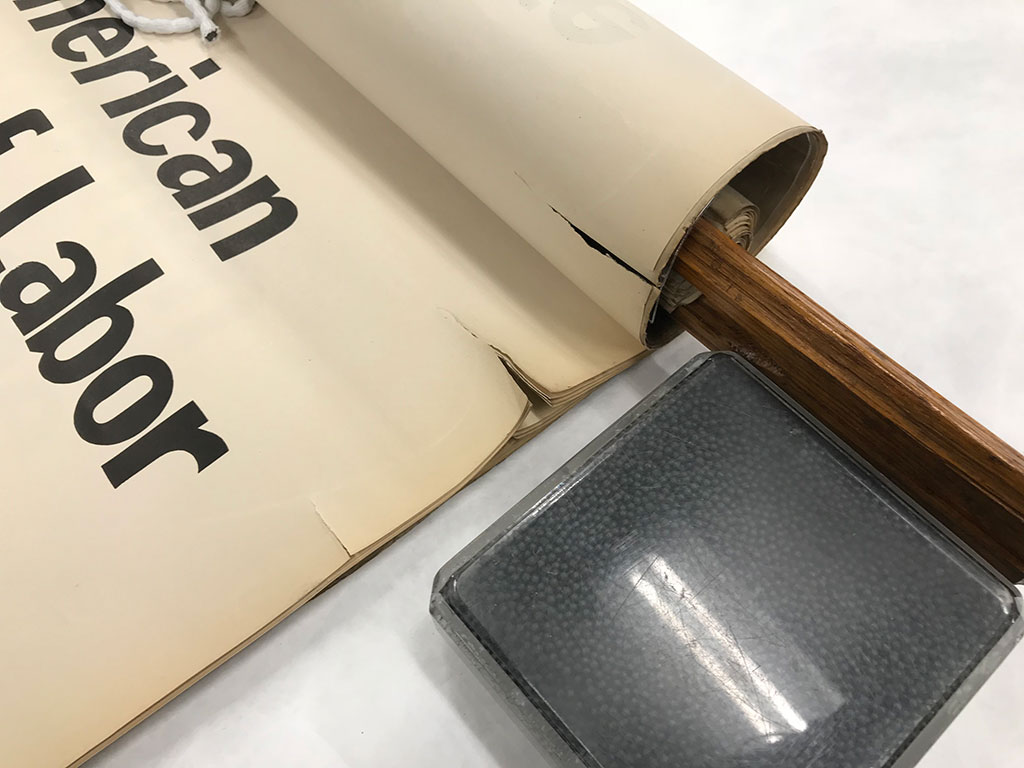 Close-up of the tears along the edges. 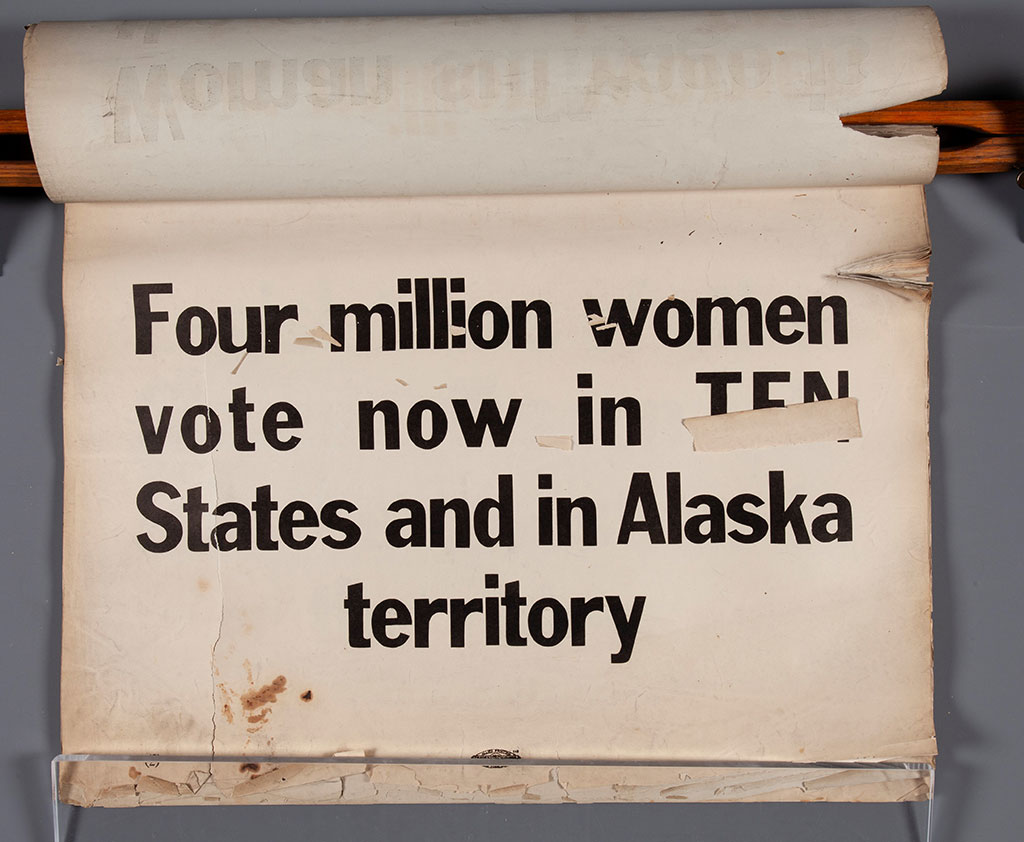 All the broadsides were extremely soiled with ingrained dirt and soot. Others were stained with numerous grey smudges, fingerprints, dark brown ink or grease stains, small accumulations of grime, and tidelines from exposure to water.

All broadsides were separated from the clamp. The wooden clamp was surface cleaned and refurbished. 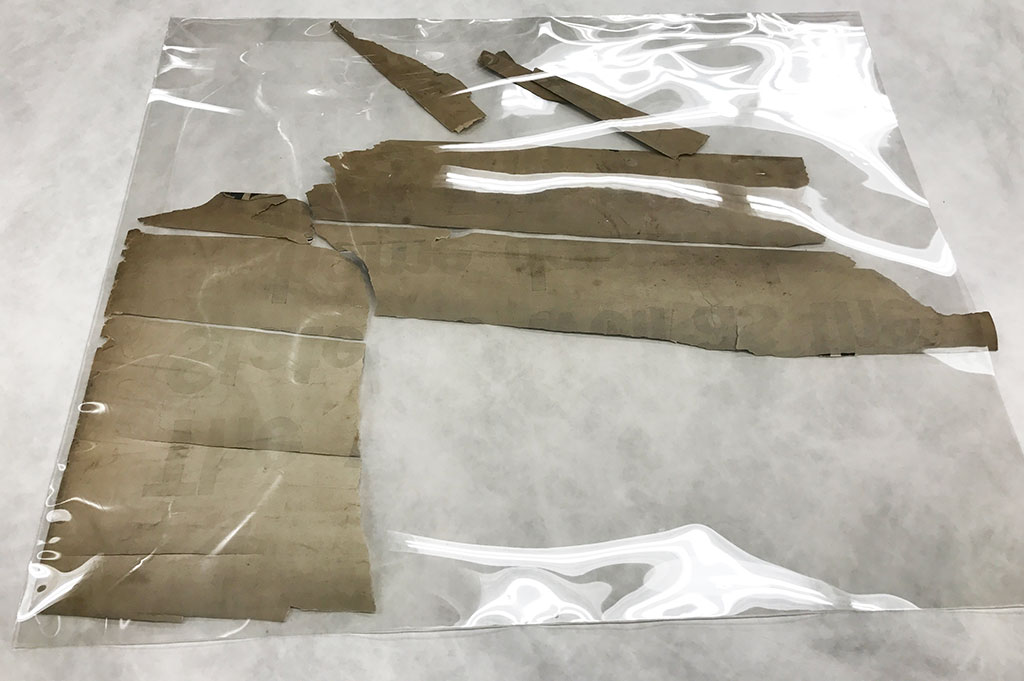 Loose fragments were collected and retained in mylar sleeves during treatment. 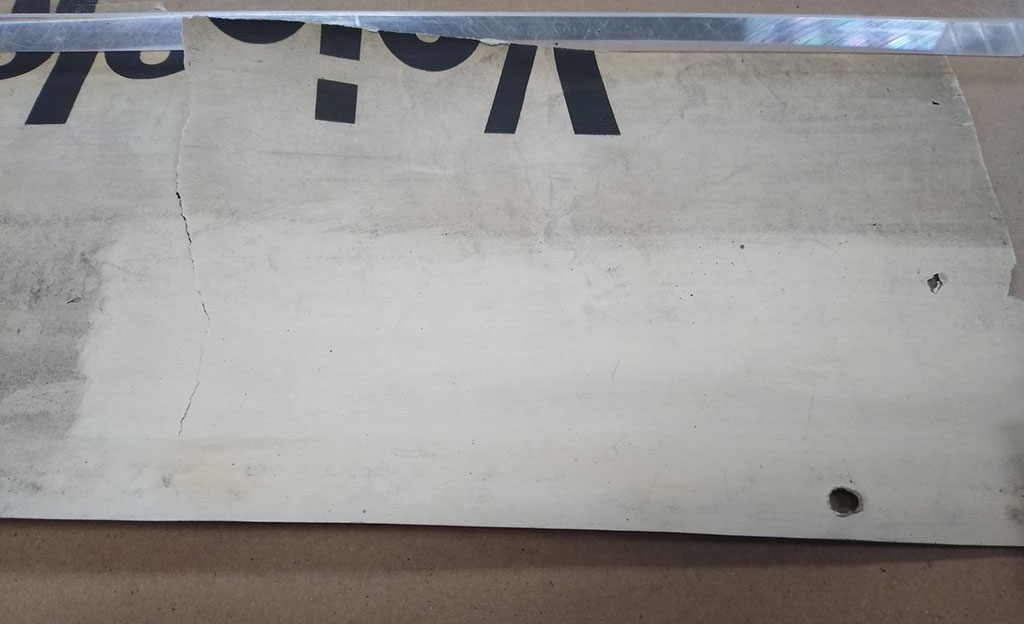 Surface soil and accretions were reduced using dry cleaning techniques as much as possible.

After confirming that the media would permit aqueous treatment, the objects were humidified and washed in separate filtered water baths to clean the paper and reduce discoloration and acidity. Alkalized water was used to reduce local staining. Linen mounting tapes and residual adhesive were removed during the washing procedure. The broadside paper supports measured pH 5.7 to 5.9 following the first wash, and all were then deacidified with a calcium hydroxide solution of pH 9.5. Staining was further reduced by controlled exposure to artificial light.

For the remaining broadsides, a strip of Japanese tissue paper was adhered for additional support along the top margin with wheat starch paste. The objects were humidified and flattened between blotters under moderate pressure. The existing punch holes were re-punched individually through the lining papers using a Japanese hole punch.

All of the broadsides were remounted to the original varnished wooden hanging clamp through the existing punch holes. A facsimile reproduction print of the first page created by the NEDCC Imaging Department was inserted over the original broadside for exhibition purposes to protect the cover sheet from excessive exposure to light.

A custom-sized corrugated archival drop box was provided to house the broadsides. A Tyvek wrapped support panel made of archival corrugated board was created and used to secure the wood clamp and broadsides within the archival box to help protect them from damage caused by handling. 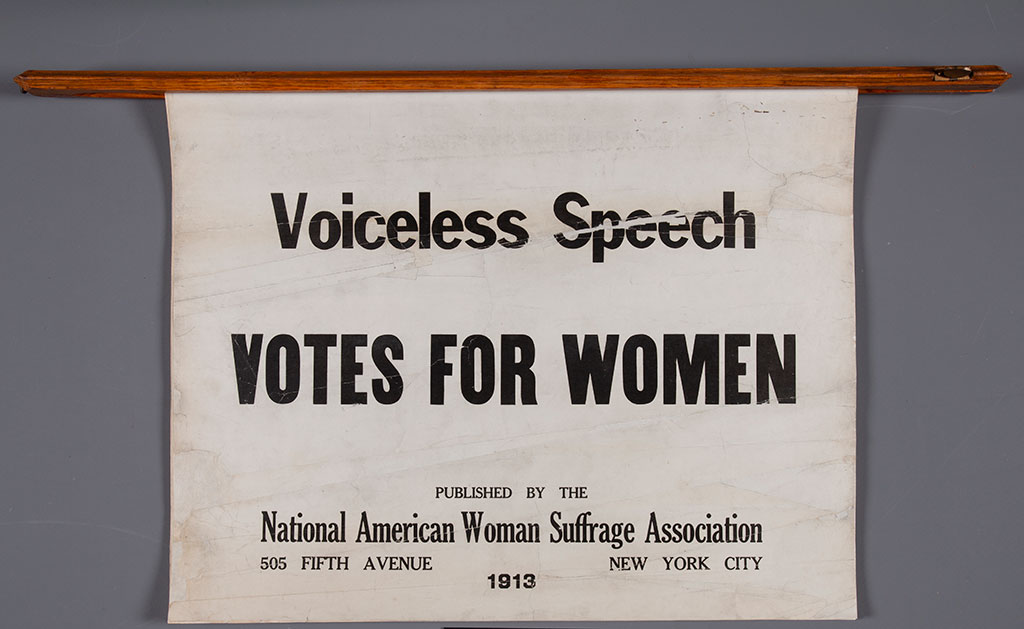 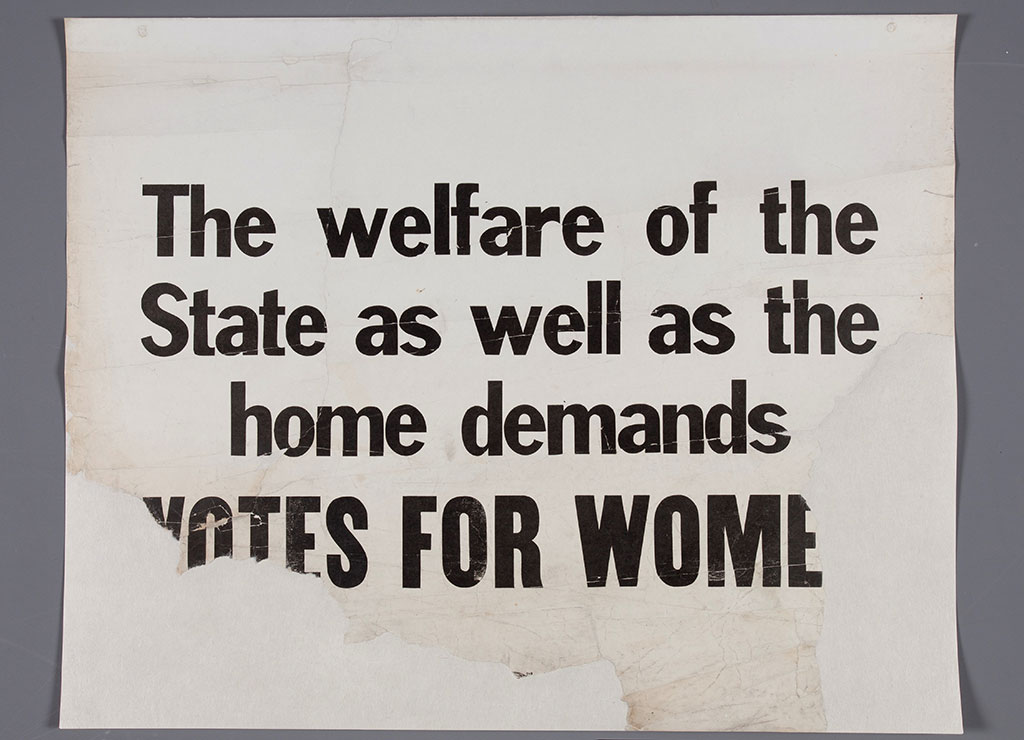 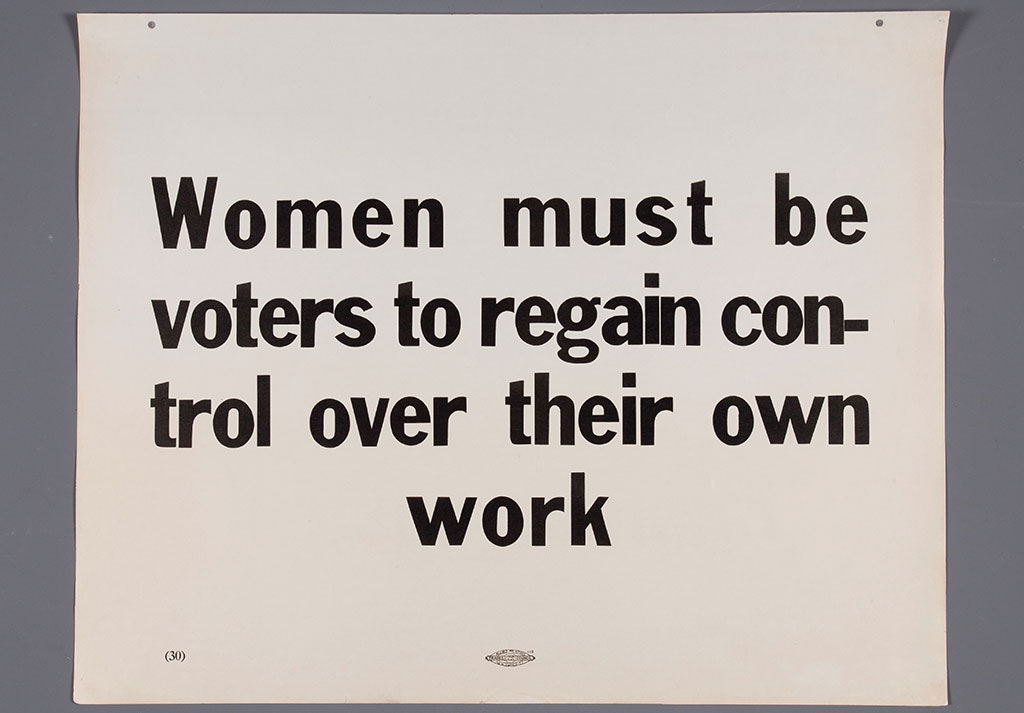 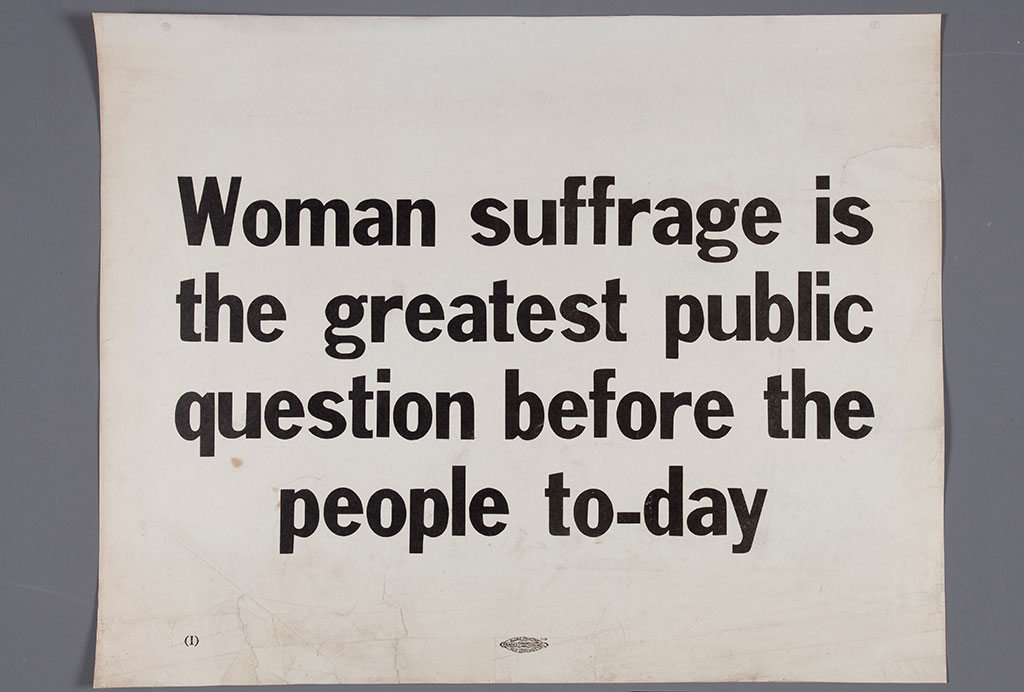 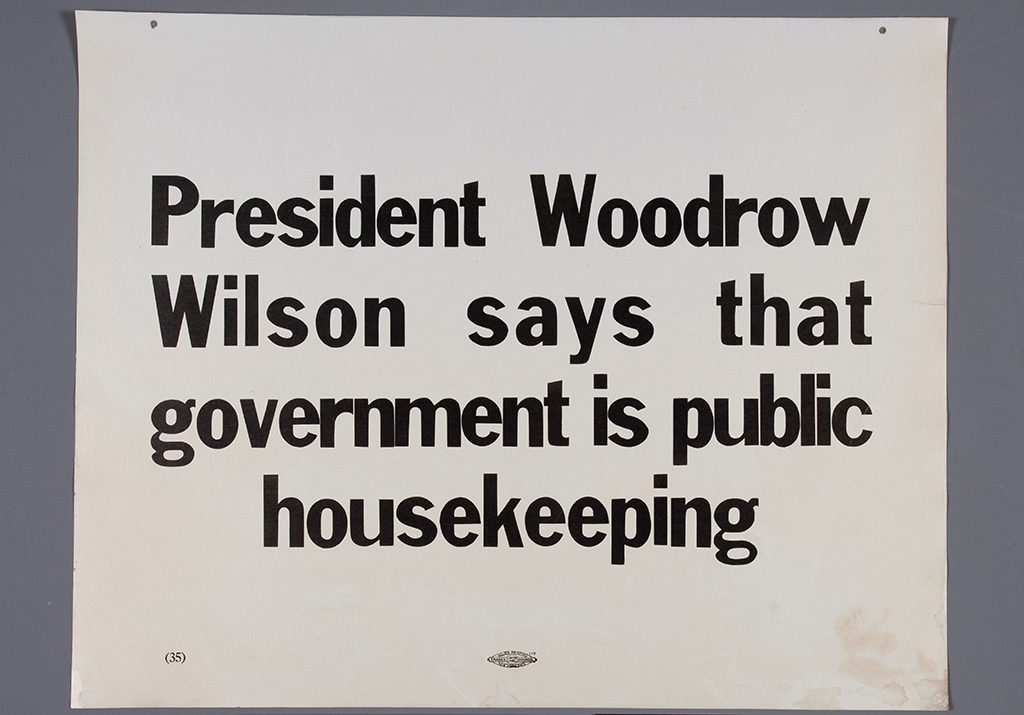 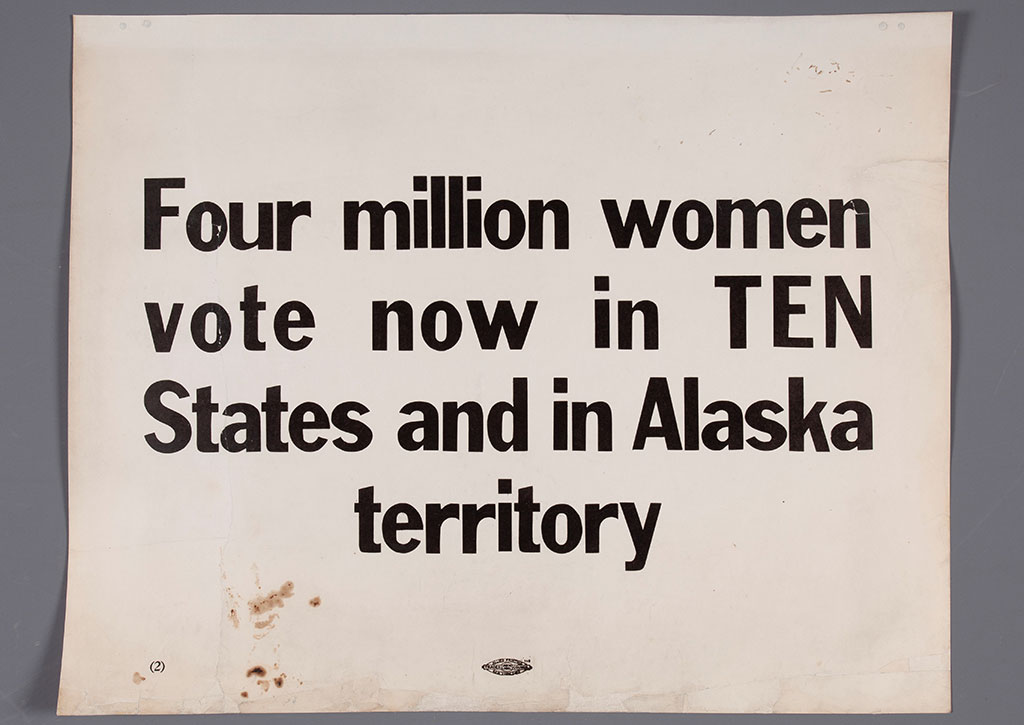 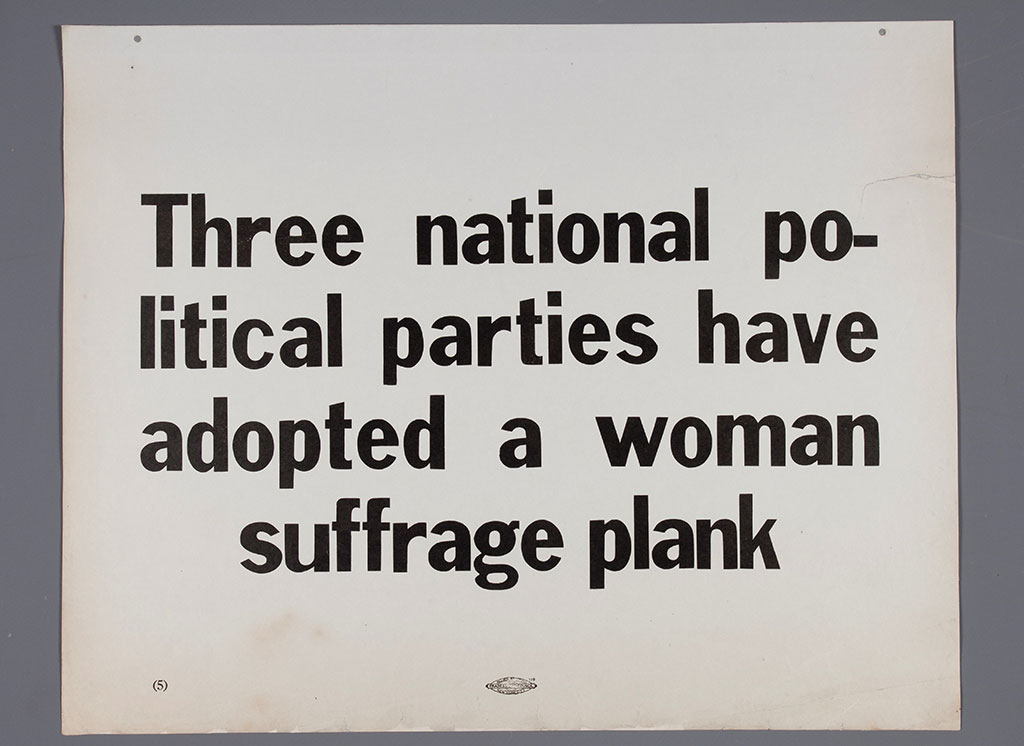 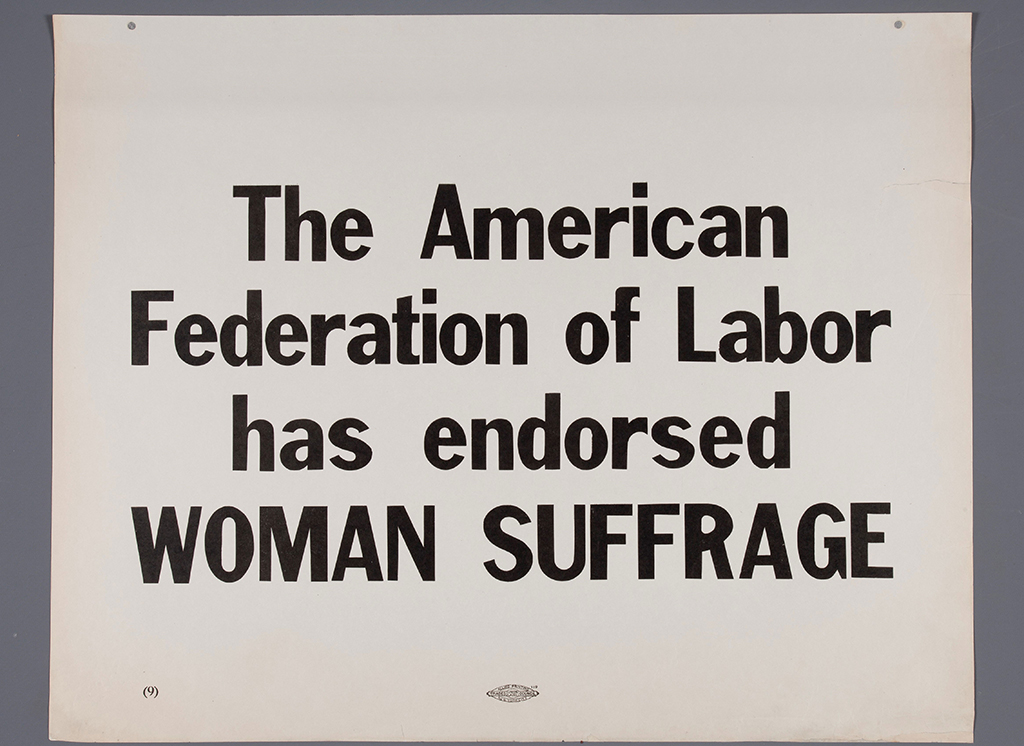 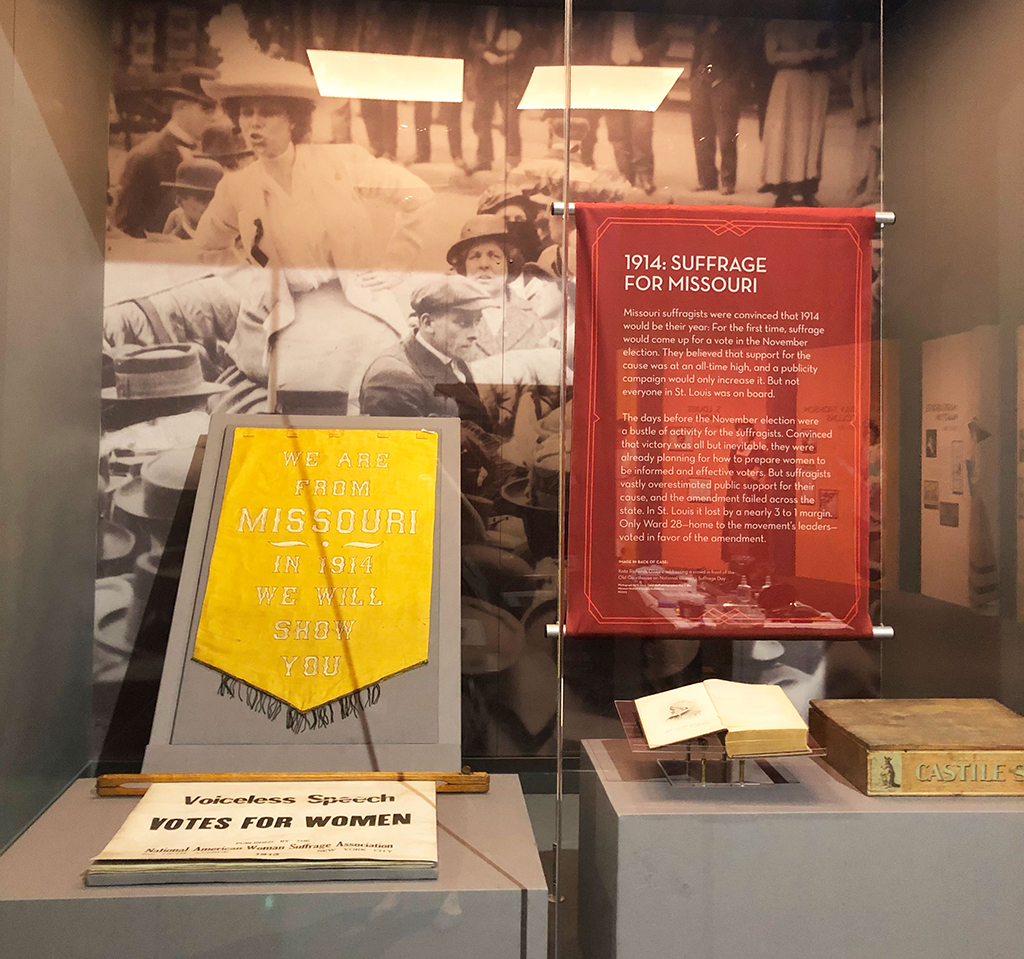 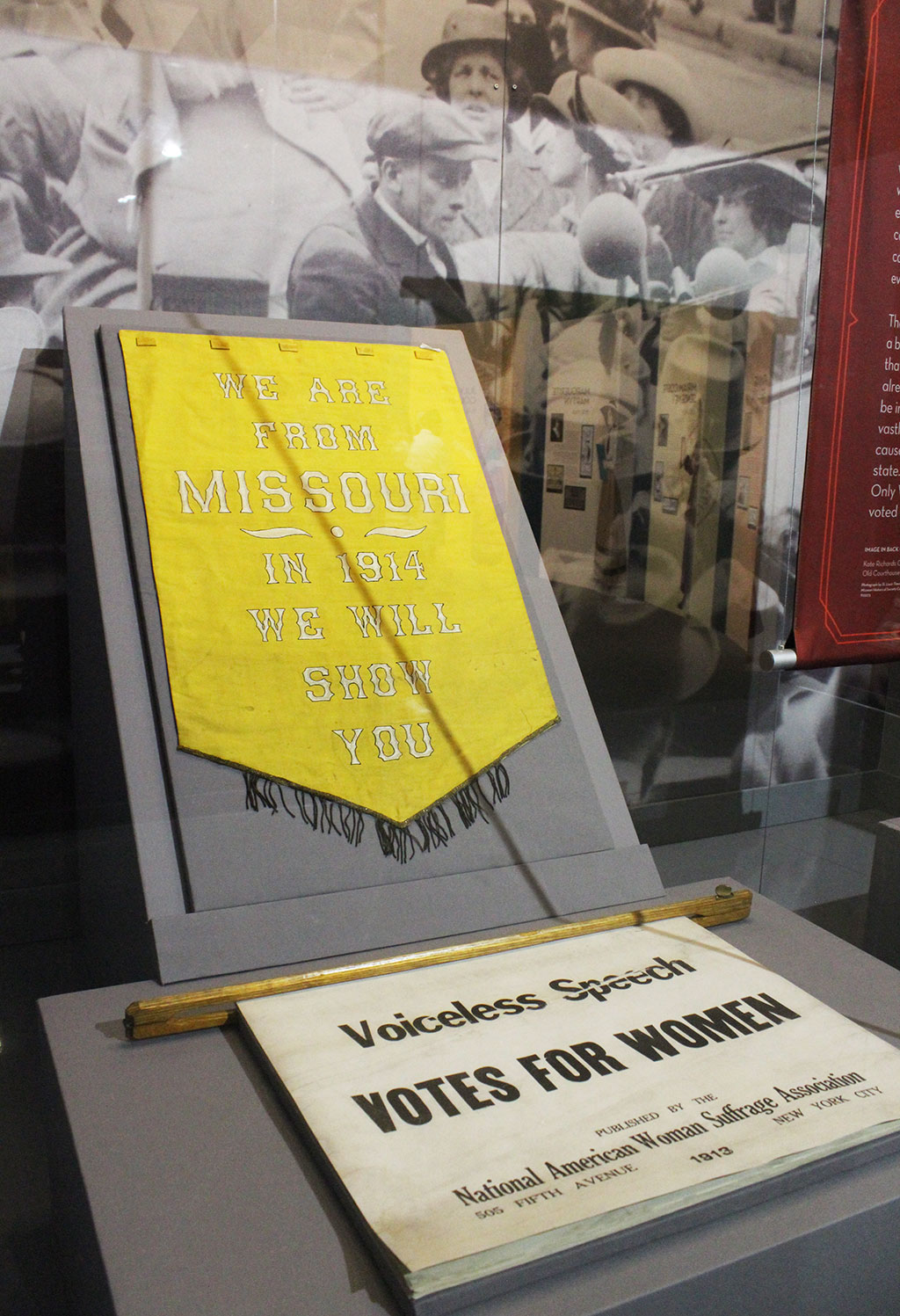 A facsimile print of the top page protects the broadsides from light damage during exhibition.
Photo: Missouri Historical Society

ABOUT THE MISSOURI HISTORICAL SOCIETY

Learn more about the Missouri Historical Society, and the exhibit, Beyond the Ballot: St. Louis and Suffrage. Open from August 1, 2020 to March 20, 2022.