"Starboard Boat Struck a Whale" and Other Tales Preserved

WHALING LOGBOOKS CONSERVED AND DIGITIZED FOR THE MARTHA'S VINEYARD MUSEUM

Situated off the southern coast of Massachusetts, the island of Martha’s Vineyard has played an important role in American history since the 1600’s. The Vineyard, as the island is known to locals, was inhabited by the Wampanoag tribe long before English settlers arrived in 1642, and in time grew to become a thriving maritime center.

The archival collections at the Martha’s Vineyard Museum reflect the island’s significance, beginning with early interactions between the English and the Wampanoag, and trade activities through the early 20th century. The museum is well-known for its maritime collection and traces the Vineyard’s nautical history through maps and charts, diaries, ship’s papers and documents, rare customs records, whaling account books, and whaling logbooks.

During the mid-19th century, whaling ships often ventured far into the Atlantic and the Pacific. The ships’ logbooks served to document the long voyages and were a critical record for the whaling companies.  Many of the whaling vessels sailed out of the larger harbor of New Bedford, but 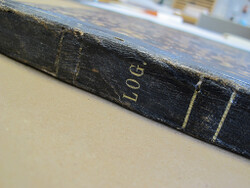 Martha’s Vineyard captains and crew members were in great demand during the height of the whaling trade. The logbooks provide a rare glimpse into the daily lives of whaleship crews who faced extremely hard work, the discomforts of rough weather, and long months and years away from home -- and who also experienced the thrill of hunting the giants of the deep.

“Logbooks like these were quite common in their day,” says Bonnie Stacy, Chief Curator at the Martha’s Vineyard Museum. “Every voyage that went out kept a logbook. Several museums have a good collection of logs, but many had been destroyed over time, or lost to deterioration.”

With funding through Edgartown’s Community Preservation Act program, the museum recently sent five of its nineteenth-century whaling logbooks to NEDCC for conservation treatment. Each of the five had a connection to Edgartown, and so were eligible for conservation treatment funding through the town’s CPA program. The logbooks were digitized at NEDCC with funding provided by the family of Joan Rosé Thomas, great-granddaughter of Richard E. Norton, the keeper of the ship Iris logbook, 1843-1847.

The logbooks span the 1840’s to the 1860’s and document the whaling voyages of five ships whose names are worthy of their own sea ballads: The Iris, The Erie, The Rose Pool, The Independence, and The Adeline Gibbs.  Illustrated with intricate and colorful drawings of the ships and the whales they sought, the logbooks detail daily shipboard activities such as cleaning, repairs, and taking food aboard, as well as whale sightings and captures, and daily weather conditions. 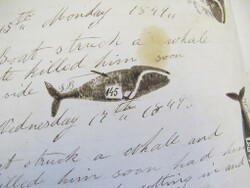 The five volumes presented a unique set of challenges for NEDCC conservators and photographers, including damaged bindings, tears and losses, previous repairs that were deteriorating, fading inks, and evidence of water damage  -- which is not surprising since these logs lived on the ships and were handled every day by the first mate. The Museum’s goals for the project were to prevent further deterioration and to make the logbooks more accessible to researchers.

A separate treatment plan was proposed for each volume depending on its individual preservation needs and condition. Digital imaging took place during treatment while the volumes were disbound, after the pages had been cleaned and repaired.  The variety of treatment steps for the volumes included surface cleaning, mold remediation, washing, adhesive removal, mending, sewing, binding repair, and rebacking.  Several book conservators worked on the project, each carrying out the complete treatment for a particular volume. They worked closely with the Imaging Services department to be sure the digital imaging took place at the appropriate time during treatment. 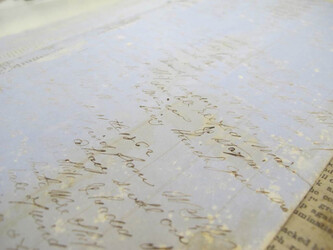 The Erie logbook treatment was particularly complicated, because at some point in this volume’s history, it had been repurposed as a scrapbook with newspaper clippings adhered to pages, in some cases covering logbook entries. Later, someone decided to remove the clippings, and while well intentioned, this removal was done without expert knowledge and experience. The removal process caused discoloration to many of the pages and large areas of ink loss, making parts of the text illegible.

NEDCC conservators and photographers put their heads together to determine the best way to approach the imaging of the pages with text loss. Tests performed using UV lighting revealed hand-written entries that were otherwise not visible, so the imaging plan was tailored to capture as much information as possible. In the end, four sets of images were taken for this particular volume: the entire volume before treatment under normal lighting; under UV lighting before treatment; under normal lighting after treatment; and under UV lighting after treatment.

During the treatment phase, the pages were surface cleaned to remove surface dirt in preparation for washing, and then washed in filtered water to remove the remaining newspaper clippings. This step required many baths and gentle brushing to remove as much of the adhesive and staining as possible. This time, the pages were not treated in a final alkalizing bath as would normally be done, just to be sure that there were no changes in the legibility of the remaining inks. The UV imaging provided dramatic results, and almost all the text was again legible. The Museum staff was thrilled to hear that the lost text had been revealed ­– an unexpected outcome, and they are eager to begin reviewing the enhanced digital files for interesting discoveries. 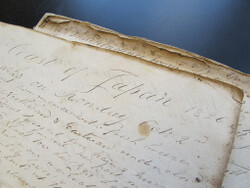 The Martha’s Vineyard Museum hopes to have the logbooks online and available to researchers soon. “There are various ways the whaling logbooks can be used,” explains Bonnie Stacy. “Researchers can use them to study the history of whaling, nineteenth- century weather patterns, or whale populations from that period. People also use them for researching individuals or genealogy. These books get used a lot,” she continues, “and that’s one of the reasons we wanted to have them digitized – to lessen the handling during research. People can refer to the images, and this will aid in the long-term preservation of the logbooks themselves.”

“Digital access is particularly important considering the Museum’s location,” she adds. “We are an island. We are not that far away, but it’s just one more step for researchers in the process of accessing the information in the whaling logbooks. They have to get on a boat . . .” 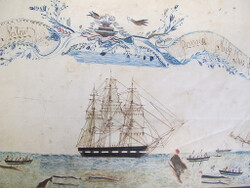 The Museum will also begin a crowdsourcing initiative to transcribe the logs, for even greater access. The digitization of the logbooks, and the fact that the imaging took place during conservation treatment, will ensure that they are at their best legibility for transcription, and digital access will allow people to help out with the transcription project even from far away. Researchers from around the world will be able to study the minutest detail on the pages of these 19th century treasures, while the conserved logbooks are safely housed in the archives.

The Martha's Vineyard Museum preserves and interprets collections that engage and connect the public to the Island's history, art, and culture. The Museum is open year round, and is located in historic Edgartown.

Visit www.mvmuseum.org for more information about upcoming programming and exhibits.

Story by Julie Martin, with help from Kristi Westberg. Thanks to Bonnie Stacy for her input and dedication to the logbook conservation project. 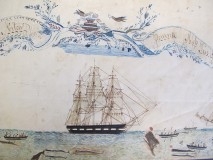 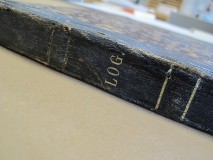 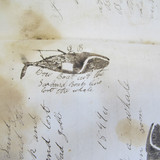 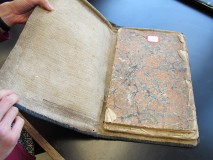 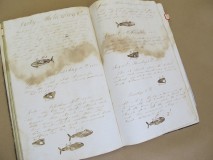 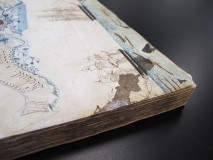 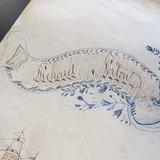 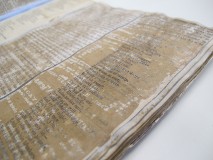 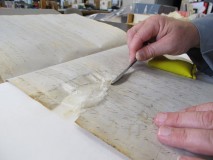 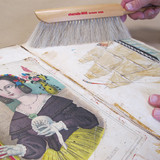 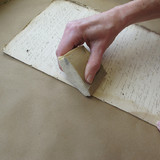 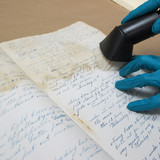 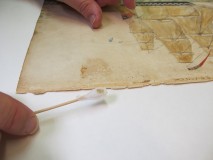 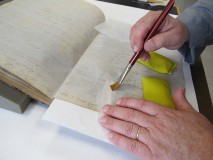 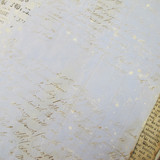 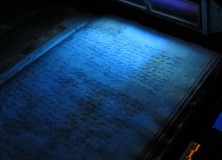 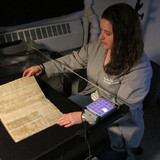 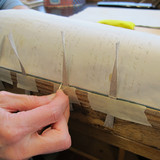 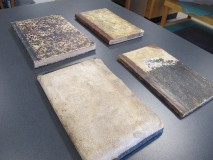