NEDCC continues to provide training and expertise for conservation staff at the Hemingway Museum at Finca Vigía (Lookout Farm), Ernest Hemingway’s home in Cuba from 1939 to 1960.

NEDCC’s former Director of Paper Conservation Walter Newman traveled to Cuba in January 2012 to conduct a week-long workshop for the Museum’s conservation team. Newman demonstrated advanced techniques in paper conservation, and museum conservation staff practiced these skills on a variety of collection materials including a map, a record album cover, publisher’s bookstore display cards, broadsides, and several other artifacts from Hemingway’s personal collections. Newman also consulted on the creation of facsimile dust jackets for books on exhibit in Hemingway’s library. This would allow the originals to be safely stored and protected from light damage.

Although the Museum's conservation area currently lacks sufficient laboratory space, adequate natural light, and conservation supplies, Mr. Newman and the Cuban conservation team accomplished a great deal during the workshop. Newman said, "This has been another rewarding experience for me and I feel that a tremendous amount of information has been shared. Both I and my Cuban counterparts have profited greatly."

NEDCC’s Senior Photograph Conservator Monique Fischer followed up with a visit to Finca Vigía in April 2012 to provide training on basic photograph treatment techniques, as well as to develop a strategy to conserve the photographs in Hemingway’s albums and scrapbooks.

During the training, the photographic materials in scrapbooks celebrating Hemingway’s Nobel Prize in literature were treated. Two film strips attached to the support page towards the end of the scrapbook were heavily “mirrored,” a kind of deterioration of photographic materials that at its worst can render the image difficult to see. Following treatment, one of the film strips revealed a previously unknown image of Hemingway.

The Hemingway Museum is well aware of the role of digitization as a powerful tool for preservation, and all the manuscripts preserved under the ground-breaking 2002 international agreement were reformatted as an integral part of the project. (NEDCC was privileged to be a partner in that initiative as well.) NEDCC’s Imaging Services department will provide advice and training for digitization of Hemingway’s books and other materials. Beyond the books’ significance as Hemingway’s personal library, many contain autographs or Hemingway’s own marginalia and underlinings. The Museum has already begun digitizing this manuscript text, and it is an important component of Hemingway’s legacy. NEDCC is hoping to send Preservation Specialist Angelina Altobellis to Havana in the near future to assist in planning for the preservation and management of the Museum’s ever-growing digital assets.

History of the Project

NEDCC has provided conservation services and training for Cuban institutions since the 1990’s. One of NEDCC’s first projects for the Hemingway Museum at Finca Vigía was a survey performed by NEDCC’s former Director of Preservation Services Millie O’Connell and Susan Wrynn, who was then Director of Reprographics at NEDCC. (Wrynn now holds the position of Curator of the Hemingway Collection at the John F. Kennedy Library in Boston.) This visit was one of the precursors to the historic 2002 agreement between the Social Science Research Council (supported by the Finca Vigía Foundation) and the Cuban government to provide for collaboration between United States and Cuban entities to conserve and reformat Hemingway’s manuscripts at Finca Vigía and ultimately make them available to international Hemingway scholars by means of digital surrogates.

Over the years, NEDCC has provided expertise for this cooperative international effort, including an item-by-item conservation treatment plan for the Museum’s Hemingway manuscript collection and short training internships in American conservation techniques at NEDCC in Andover, Massachusetts for the Museum’s paper conservator, Néstor Álvarez Gárciga and the late Museum Curator, Rosalba Díaz. We were deeply saddened by Ms. Díaz’s untimely passing in 2011.

In 2009, the Finca Vigía Foundation brokered a new international agreement to work with Cuban counterparts to preserve the books, photographs, scrapbooks, albums, and other paper-based materials held at the Museum. The Museum, the Foundation, and NEDCC collaborated in planning an ambitious program for furthering these goals, including further visits to the Museum to provide training and conservation treatment.

Many significant Hemingway materials at Finca Vigía will be preserved as a result of this international initiative, such as the bullfighting posters on display in the house, World War II posters, maps, diplomas, post cards, and Hemingway’s personal scrapbooks and albums, including a scrapbook bound in zebra skin. The conservation treatment and digitization of these rare artifacts are projects that require careful planning and the collaboration of paper, book, and photograph conservators. It is a project that will occur in stages as materials became available, with NEDCC staff returning for consultation at intervals.

“In the face of great difficulties, the staff of the Hemingway Museum does a heroic job,” comments Walter Newman. “They accomplish much with little and bring patience, practicality, remarkable inventiveness, and enormous dedication to the preservation of Hemingway’s legacy. We at NEDCC feel privileged to play a role in this effort, and our participation would not be possible without the support of the Finca Vigía Foundation.”

Watch Ernest Hemingway: How is His Extraordinary History Preserved produced by Dell EMC for more background on the Finca Vigía and the preservation efforts behind preserving Hemingway's home. 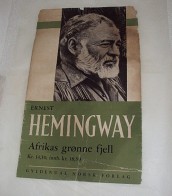 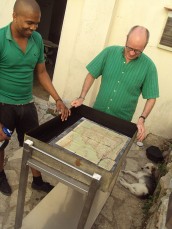 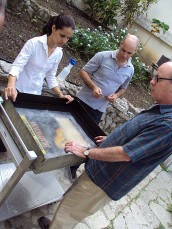 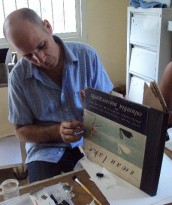