A TECHNICAL AUDIO PRESERVATION CHALLENGe . . .
THE WORST OF THE WORST

In 2017, the Duke University Libraries received a grant through the Council on Library and Information Resources (CLIR) Recordings at Risk program to digitize 88 quarter-inch open-reel tapes from the Radio Haiti Collection, which documents Haitian politics, society, and culture from 1957 to 2003. The bulk of the recordings are from 1971-2003. The Libraries had received earlier grants from the National Endowment for the Humanities to arrange, describe, and digitize the bulk of the collection, but the intensive remediation required for this particularly at-risk set of recordings was beyond the funding of their NEH-funded project.

The History of the Radio Haiti Recordings

Under the leadership of station directors Jean Dominique and Michèle Montas, Radio Haiti was a voice of social change and democracy, speaking out against oppression while advocating for human rights and celebrating Haitian culture and heritage. A controversial figure in Haiti for his outspoken activism and criticism of government leaders, Jean Dominique was assassinated in 2000.

The Radio Haiti Archive includes more than 5,300 separate recordings on more than 3,600 tapes, including open reel and cassette, in Haitian Creole and French. The recordings include daily coverage of events, cultural programs, political analysis, and discussions of Haiti’s recent history. “It represents an unparalleled resource not only for academic researchers, but also for the Haitian Public,” says Laura Wagner, Radio Haiti Project Archivist. “The ultimate goal of the project was to create an archive that is truly accessible, first and foremost, to Haitian people in Haiti.”

Laura Wagner explains why.  “On November 28, 1980, Jean-Claude Duvalier’s regime unleashed a wave of violent repression on the independent media. Radio Haiti’s journalists were arrested and imprisoned, and forced into exile until 1986. The station was destroyed, the equipment broken, but the tapes were still there. For six years they lay on the ground, filthy and exposed to the elements.

Jean Dominique and the other Radio Haiti journalists were able to return to Haiti only after the regime fell in 1986. That March day at the airport, the crowd lifted Dominique onto their shoulders, and virtually carried the car to Radio Haiti’s old station building, on Rue du Quai in downtown Port-au-Prince.” 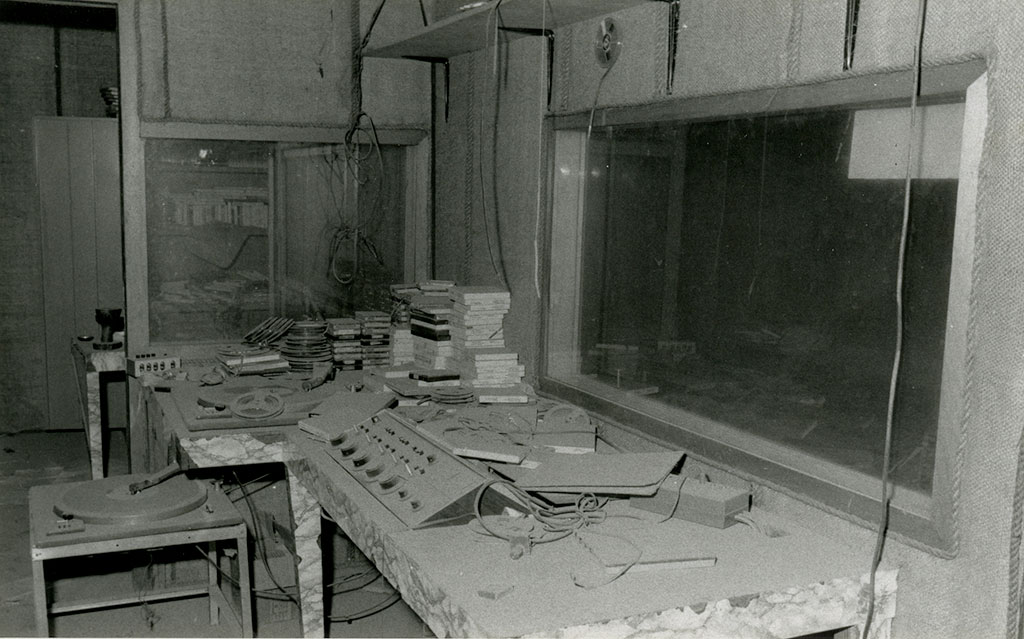 Radio Haiti Station after return in 1986. The station was destroyed, the equipment broken, but the tapes were still there. 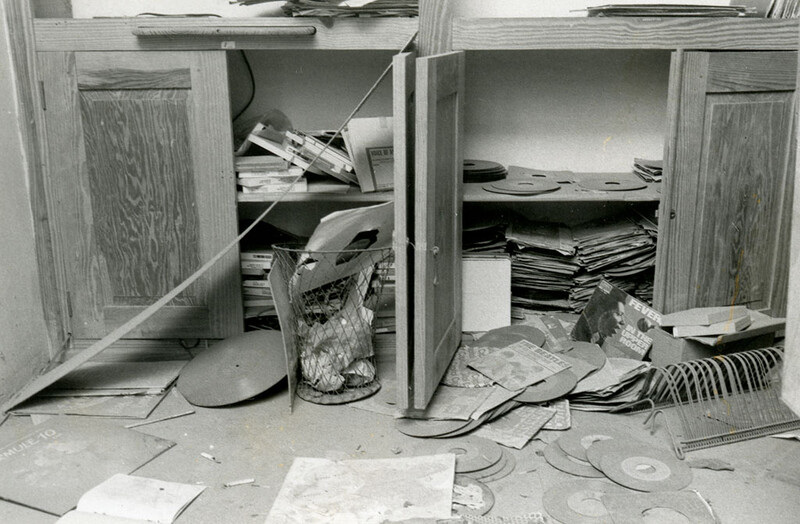 Radio Haiti Station after return in 1986. For six years the tapes and other recordings lay on the ground, filthy and exposed to the elements. 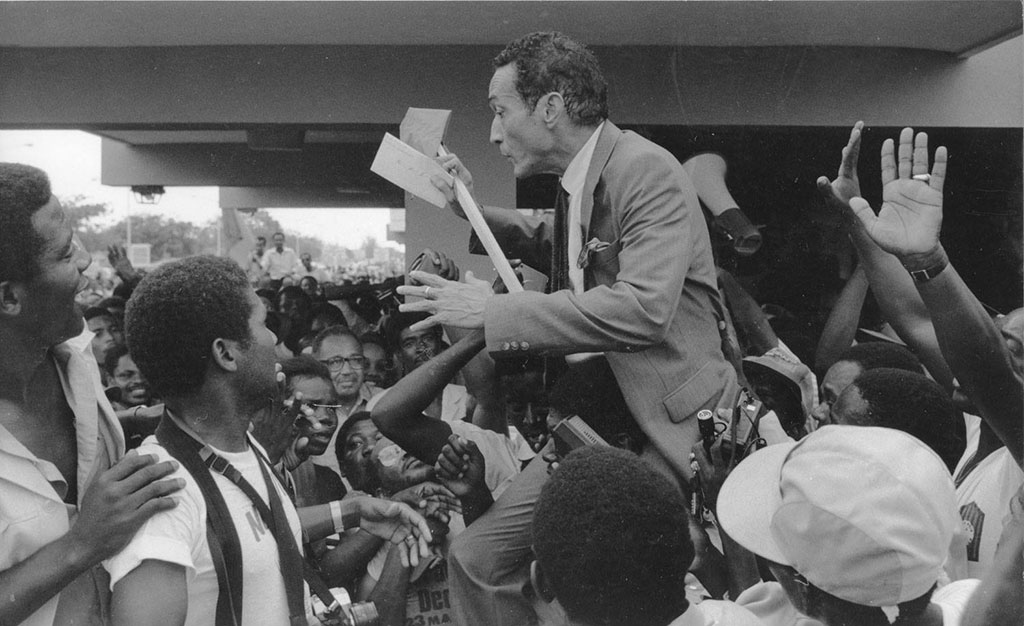 Jean Dominique hoisted in the air by his supporters, upon his return from exile in 1986.

NEDCC Audio Engineer Karl Fleck explains, “Under normal circumstances, our standard procedure is to treat the tapes before digitizing them. This involves cleaning; removing the mold (in our fume hood, not our audio control rooms); and exercising the tapes – playing and rewinding them before the actual digitization process. But this, unfortunately, was not a normal circumstance.” 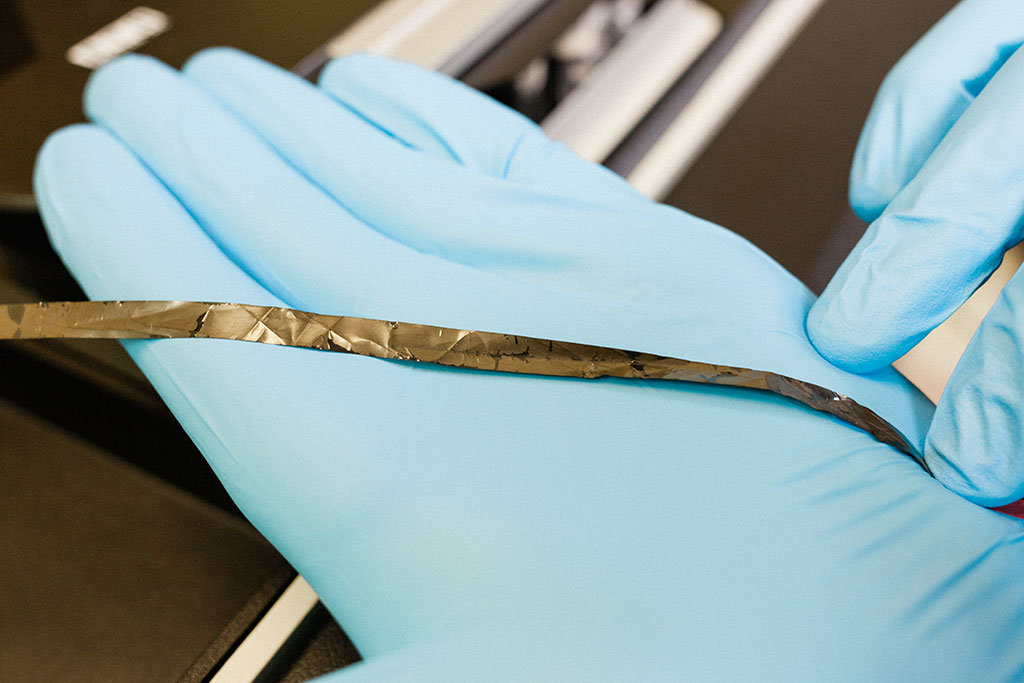 “We were faced with a dilemma,” Karl Fleck continues, “On one hand, the tapes were extremely brittle. With normal handling, the iron oxide layer (the part of the tape that stored the audio information) would flake off the polyester substrate. 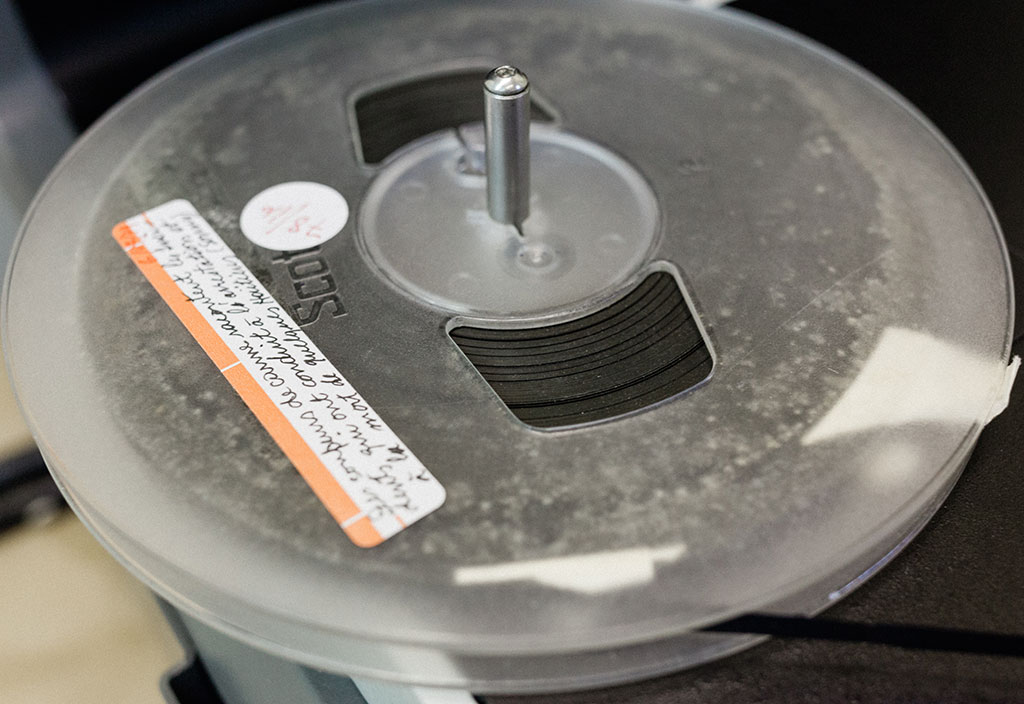 On the other hand, the tapes needed to be cleaned and the mold needed to be removed before digitizing them in our control rooms especially because the mold would be a health hazard and could interfere with playback.”

A Creative Solution: One Shot

After some brainstorming, the audio preservation team decided to clean; remove the mold; and digitize the tapes all at once in the Center’s conservation lab fume hood. This eliminated any extraneous handling which would further damage the tape. Karl Fleck describes the process, “Our solution was to roll one of our customized ATR-102 tape machines into the fume hood; clean the tape by hand with Pellon cloth before the tape reached the playback heads of the tape machine; record the audio to a Sound Devices portable hard-disc recorder; and listen with headphones.” 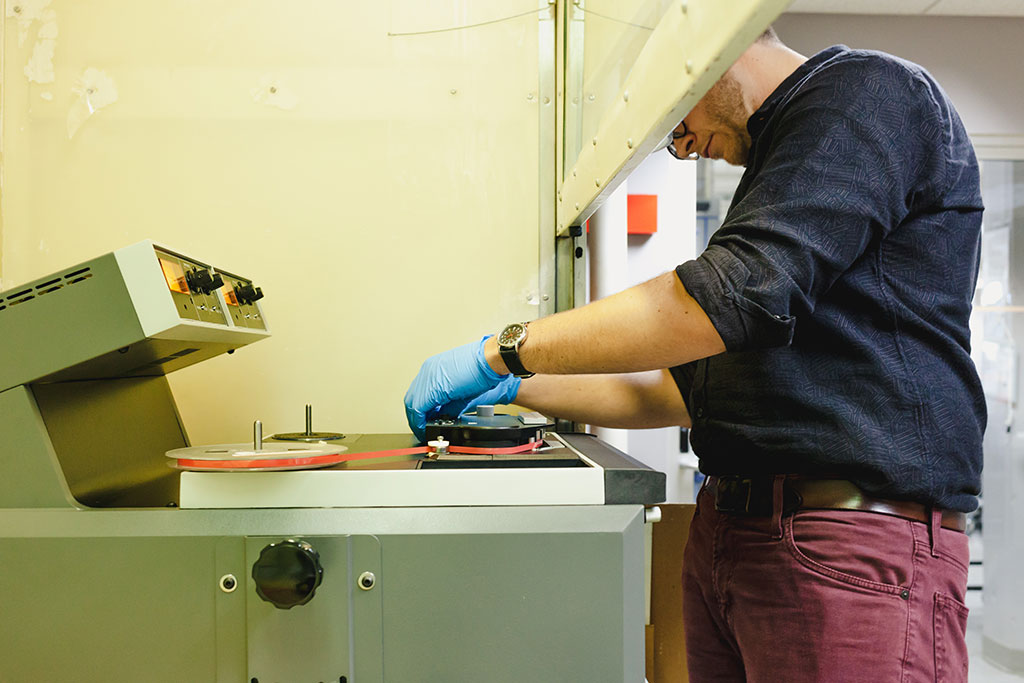 “We turned our fume hood into a temporary audio control room for a couple of weeks as we digitized the Radio Haiti tapes. We handled the tapes as gingerly as possible to minimize the wear on this fragile media. Our gentle approach to the digitization process paid off and we were able to transfer all the tapes without any issues.” 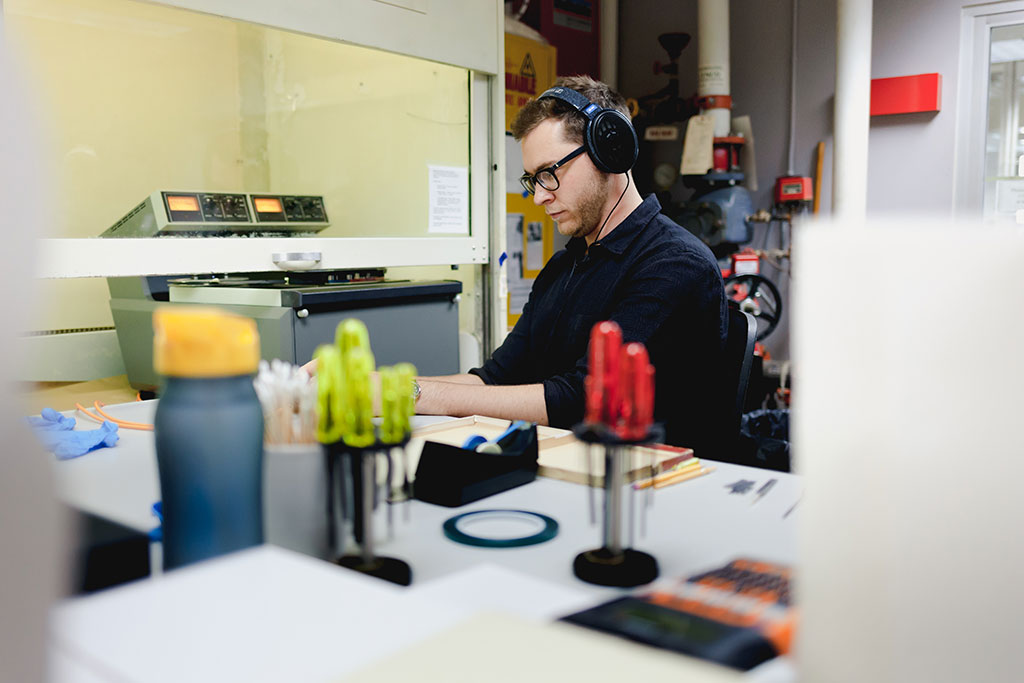 “With our careful approach,” Karl Fleck continues, “we were able to digitize the tapes without further damage. Because of this, the quality of the audio was not affected negatively and many of the programs sounded as if they were live in the broadcast studio.”

An Interesting Side Note

As it happens, one of NEDCC’s current consulting audio engineers, Jane Pipik, worked on the re-building of Radio Haiti back in 1986 in Port au Prince.  Jane and her husband Miles built out the radio studios, with the help of Radio Haiti staff. Miles had known Jean Dominique in NYC, when Jean had a radio program on WNYE while in exile from Haiti.

Miles also did the recent audio installation of NEDCC’s audiotape preservation studios. So, by an unlikely coincidence, some of the Radio Haiti tapes that NEDCC digitized were recorded on machines that were originally installed by Jane and Miles in Haiti. The legacy continues!

The Duke Digital Repository (DDR) is a service of Duke University Libraries that supports the activities of the University’s faculty, researchers, students, and library staff by preserving, securing, and providing access to digital resources.

The Duke University Libraries are the shared center of the university's intellectual life. The William R. Perkins Library, Bostock Library and Rubenstein Rare Book & Manuscript Library comprise the main West Campus library complex, which is joined by Lilly and Music libraries on East Campus, the Pearse Memorial Library at the Duke Marine Lab and the separately administered libraries serving the schools of Business,  Divinity, Law and Medicine. Together they form one of the nation's top ten private university library systems.

The Council on Library and Information Resources (CLIR) Recordings at Risk program is a national re-granting program administered by CLIR to support the preservation of rare and unique audio and audiovisual content of high scholarly value. Generously funded by The Andrew W. Mellon Foundation, the program will award a total of $4.5 million between January 2017 and April 2021.

NEDCC’s Audio Preservation Services specialize in the digitization of significant at-risk recordings that require extra care and attention. In 2014, NEDCC began offering audio preservation services for grooved media using the “touchless” optical-scanning technology, called IRENE, which retrieves sound without damaging the physical carrier.  Based on the success of IRENE, NEDCC’s clients began asking us to expand into audio preservation of magnetic and digital audio tape with a high-touch, high-quality service for their unique collections where the stakes are high. We are grateful to the Andrew W. Mellon Foundation for their support for the expansion of our Audio Preservation services.