Far and away the best prize that life has to offer is the chance to work hard at work worth doing.
- Theodore Roosevelt

Over the last three years, a great many individuals have worked hard at work worth doing to complete the restoration and rehabilitation of Sagamore Hill, the home of Theodore Roosevelt from 1885 until his death in 1919.  The Sagamore Hill National Historic Site celebrated the grand re-opening of the house on July 12, 2015. As part of the restoration project, the Northeast Document Conservation Center (NEDCC) performed conservation treatment on the  historic wallpaper in the North Room of the house, working onsite in Oyster Bay, as well as on sections of the wallpaper that were brought to the NEDCC lab in Andover, MA for treatment. 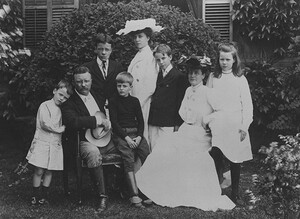 In 1880, Roosevelt bought 155 acres on the north shore of Long Island, a place he had often visited as a child. The 28-room house was built in Queen Anne style, with spacious verandas and spectacular views. He named the house after the Algonquin word for chieftain or ‘head of the tribe.’  He and his second wife raised six children at Sagamore Hill.

The home was the center of Roosevelt’s family life as well as his political life, and it became his summer White House while serving as the nation’s 26th president from 1902 until 1909. During that time, the Roosevelts hosted luminaries from across the country and around the world.

Theodore Roosevelt is known for his many larger-than-life endeavors, from his determination to become a cattle rancher in the Dakota Territories, to the battle at San Juan Hill with the Rough Riders during the Spanish American War. His presidency is considered one of the most effective in history. He oversaw the realization of the Panama Canal and was instrumental in passing the Pure Food and Drug Act. He was the winner of the Nobel Peace Prize in 1906. Roosevelt’s conservation measures secured over 125 million acres of national forests and ensured the protection of the country’s many national monuments including the Grand Canyon, Yosemite, and Crater Lake. Yet, through all his activities and accomplishments, Sagamore Hill remained a place of respite and the center of his world.

On the day before he died there, on January 6, 1919, Roosevelt asked his wife Edith, “I wonder if you will ever know how I love Sagamore Hill?”

On July 25, 1962, Congress established the Sagamore Hill National Historic Site to preserve the house as a unit of the National Park Service, and it was listed on the National Register of Historic Places on October 15, 1966. 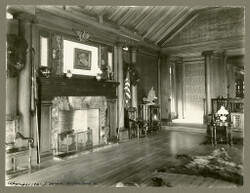 "After Theodore Roosevelt won reelection in 1904, the Roosevelts decided to add onto the home and to create a room where TR could received guests and hold meetings.  They asked their friend C. Grant LaFarge to design the space and supervise its construction, which began in March 1905 and was completed in June of the same year.  The addition was 40 feet long and 30 feet wide with an 18 foot ceiling and a 16 x 8 foot alcove.  The 10 columns are American black walnut; while the fireplace surround is carved from a single piece of Philippine mahogany.  The ceiling is made of alternating boards of hazel, cypress and walnut boards.  The red and brown wallpaper had an embossed pattern accented with gold strands and was installed by paper hangers who came out on the train from Brooklyn to do the work."  (Sagamore Hill National Historic Site)

About the Conservation Treatment of Historic Wallpapers at Sagamore Hill

The Sagamore Hill wallpaper conservation treatment project began in June of 2012, when NEDCC’s former Director of Paper Conservation Walter Newman visited the site and evaluated the condition of the wallpapers in the North Room of the house, which included two types of wall coverings.

One is a textured paper similar to grass cloth, and the second is a three-dimensional embossed vine-and-flower pattern printed in metallic colors on a brick red background.  The grass cloth paper was generally well-adhered to the wall and ceiling, but the embossed paper was poorly attached to the wall in several places and residual plaster was adhered to the reverse side. All the wallpapers were dirty and the metallic paints had discolored in different areas. The papers had also suffered scratches, gouges, and surface losses to varying degrees. 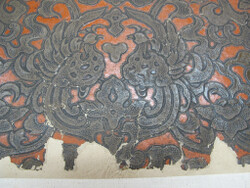 The conservation treatment proceeded in several stages, the first of which was to remove the wallpaper that was partly detached so it could be better protected during renovation work in the room.  Mr. Newman returned to the site in September 2012 and removed three of the large panels in the North Room, consisting of 3 sections each. The wallpaper was layered in Tyvek and placed in honeycomb cardboard folders for safe storage.  Mold was present on one of the sections and this paper was wrapped separately and stored in a controlled environment to inhibit further mold growth. The mold would later be removed with a HEPA vacuum as part of the conservation treatment.

The next stage of the treatment took place in October of 2014, when the nine sections that had been removed were brought to NEDCC for treatment in the lab. Michael Lee, current Director of Paper and Photograph Conservation, oversaw the treatment. The panels were imaged in NEDCC’s Oversize Imaging Studio before treatment proceeded.  The treatment began by gently abrading the verso of each panel with fine sandpaper to reduce residual adhesive and plaster, while not disturbing the paper’s surface. Conservators then surface cleaned the front of the panels with vulcanized rubber sponges. The moldy areas were treated with isopropanol and losses were filled with heavyweight Japanese paper toned with Gamblin Conservation Colors to match the original. The panels were lined with a fine Japanese paper on the verso. 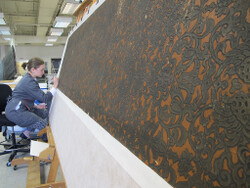 Losses and flaking paint on the front of the wallpapers were then consolidated with methyl cellulose, which helps keep the existing paint in place on the surface of the paper.  Losses were inpainted using conservation pigments, and conservators were able to carefully match colors so that the losses are now nearly invisible.

The panels were photographed in the Oversize Imaging Studio again after treatment, and the panels were packed in glassine and returned to their original folders for the trip back to Sagamore Hill.

Michael Lee, along with two conservators, Amanda Maloney and Maggie Wessling, and the Center’s conservation technician, Annajean Hamel, traveled to Sagamore Hill in November 2014 to begin the 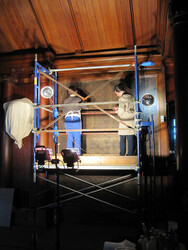 onsite stage of the conservation treatment.  The walls had been prepared by Park Service staff in advance of their visit.

Working on ladders and staging to reach the highest sections of the North Room, the NEDCC conservation team reinstalled the paper that had been conserved, and surface cleaned and repaired the paper that had been left in situ. They consolidated loose media and inpainted losses on the existing wallpaper, using the same methods employed at the NEDCC lab. The conservators not only completed their work while on high staging, but they did so while working around a variety of hunting trophies and other features that had been carefully covered during the process. 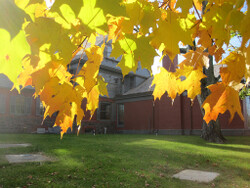 The NEDCC conservation team spent over a week at Sagamore Hill, and the project proved to be hard work worth doing – the conserved wallpaper adorning the North Room now looks much like it did in Roosevelt’s time.  But the hard work of NEDCC’s conservation staff was not without some pleasures as well. The team greatly enjoyed working among Sagamore Hill’s beautiful grounds and views, just as Theodore Roosevelt and his family had for so many years.

Click on any image for a larger view and all 30 photos. 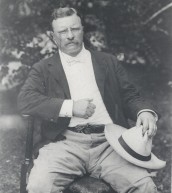 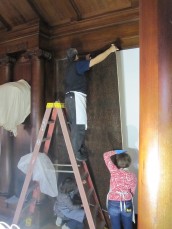 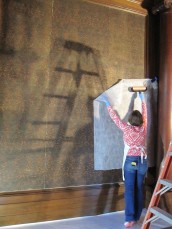 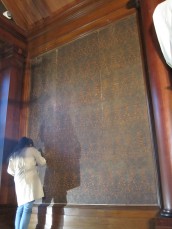 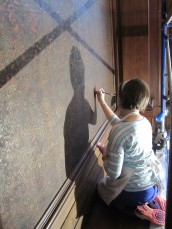 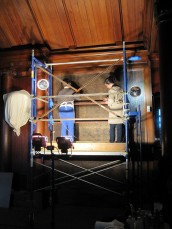 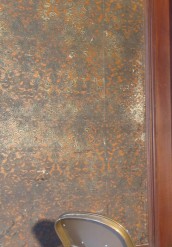 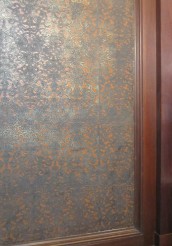