The Legacy of an Aviation Legend:

CREATING ACCESS TO ARCHIVAL MATERIALS AT
THE IGOR I. SIKORSKY HISTORICAL ARCHIVES 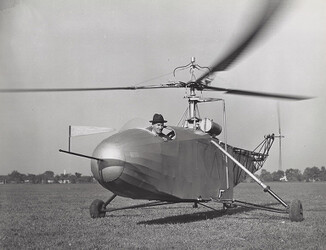 When you mention the name Sikorsky, most people think ‘helicopters.’ But in fact, Igor Sikorsky was an aviation pioneer in multi-engine and fixed wing aircraft as well. Born in Kiev, Russia (now Ukraine) in 1889, Sikorsky had already built the largest seaplane in the world, constructed an early prototype of the helicopter, and broken many aviation records when he arrived in the US in 1919. His passport plainly stated his reason for emigrating to America: “to construct aircraft.”

Igor Sikorsky’s achievements include an impressive list of “firsts,” including:

Of all his achievements over the years, Igor Sikorsky considered the helicopter to be his most important because of its value to humanity – the helicopter could save lives.

"It would be safe to say that the helicopter’s role in saving lives represents one of the
most glorious pages in the history of human flight. If a man is in need of rescue, an
airplane can come in and throw flowers on him, and that’s just about all. But a direct
lift aircraft could come in and save his life.”                 – Igor I. Sikorsky

About the Igor I. Sikorsky Historical Archives 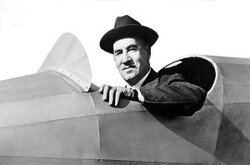 The Igor I. Sikorsky Historical Archives is dedicated to preserving the history of Sikorsky’s life and careers in aviation. The Archives is largely staffed by dedicated volunteers, and their combined experience in aviation adds up to over 600 years. The Sikorsky Archives, based in Stratford, CT, fields email questions from all over the world, and its website has an active international following by researchers, historians, and aviation enthusiasts. The collections include Sikorsky company business records; Sikorsky’s original aircraft design drawings; and a great number of photographs of and correspondence with many of the world’s notables, including Orville Wright, Henry Ford, Charles Lindbergh, Dwight D. Eisenhower, Sergei Rachmaninoff, and Frank Sinatra. The collection of artifacts and historical memorabilia include Sikorsky’s iconic fedora, the same one he wore when he first tested the VS-300 helicopter in 1939. 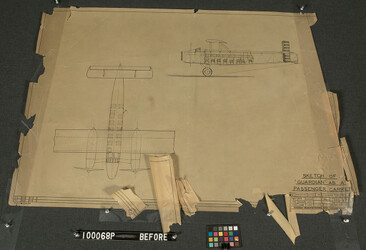 Over the past years, NEDCC has provided conservation treatment for a collection of the original Sikorsky aircraft design drawings, including many signed by Igor Sikorsky. The drawings were surface cleaned, and when possible,  washed in filtered water to reduce acidity. Tears and breaks were mended with Japanese paper and wheat starch paste. After humidifying and flattening, the drawings were encapsulated in polyester film (Melinex) to protect against dirt and moisture and to make them more safely accessible for study. 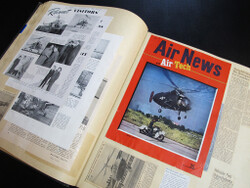 are working on a large portion of the digitization project in-house. Some of the oversize and most fragile materials were sent to NEDCC for digitization, including Sikorsky’s personal scrapbooks, which contain newspaper clippings and articles about his own successes as well as other aviation news of the time, and cover the period between 1923 and 1958.  As with many scrapbooks of this period, they are deteriorating because of the acidic paper used in the volumes. Adhesives have stained the paper and have begun to obscure the text in some areas. While the scrapbook’s bindings are stable, the contents are so fragile that the Archives’ staff has avoided opening them, and researchers have not had access to their information. Some of their contents remain largely unknown. Because NEDCC’s photographers are experienced in the care and handling of rare and fragile materials, they were able to image even the very largest volumes in the Center’s oversize imaging lab, and then run OCR (optical character recognition) analysis on the images to produce the full-text-searchable files. 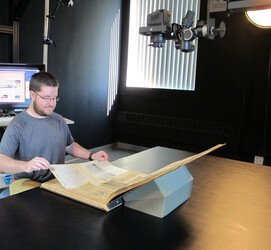 “We need to stop time on these scrapbooks,” says Dan Libertino, President of the Sikorsky Archives, “so we need the clearest images possible.” The scrapbooks contain over 10,000 pages of data, and there is no index to the volumes. There are also mysteries that may be solved through NEDCC’s digitization of the scrapbook collection and the resultant text-searchable files. A typical example is the Archives staff's particular interest in details and newspaper accounts of the S-35, the three-engine transport built in 1926, which had a 1,000 mile range and might have won Orteig prize for flying nonstop from New York to Paris. Charles Lindbergh famously  captured the prize in May of 1927, flying the Spirit of St Louis.

The Igor I. Sikorsky Historical Archives is a non-profit 501(c)(3) organization, independent of Sikorsky Aircraft. The Archives is manned by volunteers and relies on donations and memberships to cover operating expenses. They are actively fundraising to complete digitization of the scrapbook collection. Conservation efforts and creating access to the collections online will help preserve the legacy of Igor I. Sikorsky, Russian-born scientist, engineer, pilot, and entrepreneur who made fixed and rotary-wing aviation history with a mix of genius, determination, and humanity.

For more information on the Sikorsky Archives, including information on how you may become a member or make a donation, please visit: www.sikorskyarchives.com 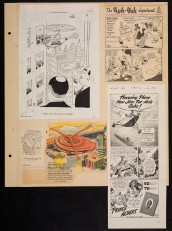 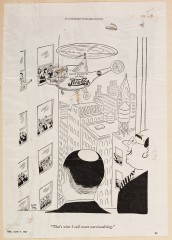 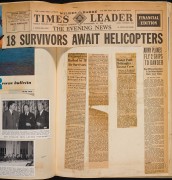