Woody Guthrie was not only a prolific and iconic songwriter and documenter of American culture from the 1930s through the 1950s, he also produced a vast creative legacy of artwork, journals, notebooks, letters, and detailed scrapbooks. When he died in 1967 of Huntington’s Disease, he left nearly 3,000 songs unrecorded.

Many visitors to the Woody Guthrie Archives are powerfully moved when they find themselves sitting in the presence of manuscripts in Guthrie’s handwriting, his original artwork, and other unique ephemera that he carefully pasted into scrapbooks over the years. The extensive and eclectic collection is now more accessible to musicians, artists, scholars, and others who come to the Archives to find inspiration while “sitting with Woody.” Due to the preservation efforts of the dedicated team at the nonprofit Archives, these original materials will remain available for future generations of researchers of American culture.

The Woody Guthrie Foundation was established in 1972 by Woody’s wife, Marjorie Mazia Guthrie. Nora Guthrie, Woody’s daughter, is Director of the Foundation and the driving force behind the preservation and dissemination of information about Woody Guthrie’s significant cultural legacy. Since 1996, the Foundation has served as administrator and caretaker of the Woody Guthrie Archives, the largest and foremost collection of Woody Guthrie material in the world. In 2010, the Archives and Foundation moved to a new facility in Mt. Kisco, NY. Acquired by the George Kaiser Family Foundation, the collection moved again in 2013 to a permanent home in Tulsa, OK.

Planning for the Preservation of the Woody Guthrie Collections

Preserving the Woody Guthrie collection has been a main objective since the Foundation was first established. As a result of ongoing consultations with Deb Wender, the Northeast Document Conservation Center's (NEDCC) Director of Book Conservation, Guthrie Archives founding Curator Jorge Arévalo Mateus succeeded in shepherding the Archives through a preservation planning process that included an initial site visit, consultations on specific materials, and a formal preservation planning survey, conducted in 2006 by NEDCC.

NEDCC’s preservation survey report included recommendations on the Archives’ collection environment as well as other collections-care issues such as storage and handling procedures, security, and emergency preparedness planning. The survey helped prioritize the materials in most need of conservation treatment, based on their condition, their importance to the collection, and their frequency of use.

NEDCC’s recommendations were used as the basis for a successful grant application and award in 2009 from the prestigious Institute of Museum and Library Services and administered through the New York State Education Department. Jorge Arévalos Mateus was instrumental in securing the grant, which allowed the Archives to proceed with the much-needed preservation and conservation work.

2009 Conservation Treatment at NEDCC Results in New Access to Materials

The Northeast Document Conservation Center completed conservation treatment and digitization of six unique scrapbooks kept by Guthrie and other family members, chronicling his life and career as he traveled through Oklahoma, Texas, California, New York, and Florida. The scrapbooks contain original family photographs as well as artwork, telegrams, ticket stubs, postcards, and other ephemera documenting his travels among the music greats of the 1940s and 1950s. The scrapbooks also include several rejection letters from major record labels that Guthrie carefully saved along with everything else.

When NEDCC’s Senior Photograph Conservator Monique Fischer was removing photographs from one of the scrapbooks for cleaning, she discovered that there were captions on the back of many of the photographs. These inscriptions, not seen since the day the scrapbook was created, have identified people and places that were previously unknown to the Archives. “It has changed the way we research,” says Tiffany Colannino, then Archivist at the Guthrie Archives, “and solved more than a few mysteries.”

The conservation treatment of this portion of the Archives will dramatically increase researchers’ access to this treasure trove of American cultural history. In fact, as a result of NEDCC’s conservation treatment, some of the scrapbooks are now available to be viewed and handled for the first time in many years. Several of the scrapbooks were so fragile that not even Archivist staff had been able to examine them fully. After treatment and encapsulation by NEDCC, Ms. Colannino said, “It is like someone went back in time and gave us back our scrapbooks. It’s a miracle!” Conservation efforts have also allowed the Archives to display several notebooks — previously too fragile to travel or mount – in museum exhibits for the very first time.

Digitization of Woody Guthrie Materials Streamlines Research at the Archives

The Northeast Document Conservation Center’s Imaging Services department also digitized over 4,000 pages of the Archives' collection of journals and notebooks, a series of composition books, pocket diaries, and other blank books in which Guthrie collected his writings, artwork, and song lyrics. As Nora Guthrie describes them: “Woody expressed himself in many different ways - as a songwriter, a writer of fiction, journalist, illustrator, and a furious letter writer. The notebook and diary entries are much more personal and intimate than many of his song lyrics which often deal with political and current events. I have the feeling that he was so comfortable writing in a ‘lyric’ style that even his thoughts regarding his personal and daily life often have a lyric quality.”

Digitization of the materials has streamlined the way the Archives’ original materials are accessed. The digital files will never replace the immediacy of the in-person visits to the Archives, but the digital thumbnails are very useful in helping researchers decide which items, among the thousands held in the collection, they would like to consult, thereby saving the original items from wear and tear.

“Woody is just Woody,” wrote John Steinbeck. “Thousands of people do not know he has any other name. He is just a voice and a guitar.... But there is something more important for those who still listen. There is the will of a people to endure and fight against oppression. I think we call this the American spirit.”

"As many of you have already heard, we are happy to announce that the Woody Guthrie Archives has found a permanent home! Through a fortuitous meeting with the folks at the George Kaiser Family Foundation, the Archives has relocated to a brand new facility in Tulsa, Oklahoma in 2013. The building houses the Archives and has also created an open public space for exhibits, community gatherings and events, and even some hootenannies!" - Nora Guthrie

Nora Guthrie is now the President of Woody Guthrie Publications, Inc. which operates out of the Mt. Kisco, NY offices. Ms. Guthrie develops and produces artistic projects which continue to introduce the public to Woody Guthrie's vast cultural legacy.

Click on any image for a larger view and all 22 photos. 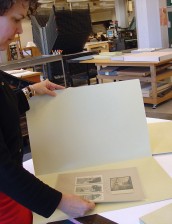 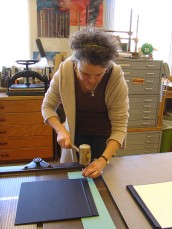 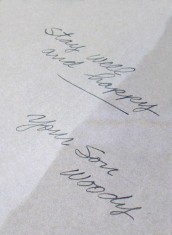