During the pilot project for NEDCC’s new IRENE Audio Preservation service, the IRENE lab has been focused on the mechanics of the system; on procedures and workflows; on groove shape and bit depths and wave forms.  But one of our first client projects for IRENE has shown us just how important these recovered audio recordings can be – and on a very personal level.

Lt. Ray J. Skryja served during WWII as a bombardier in B-24 Liberators out of North Africa and Italy, completing 50 missions – no small feat during combat.  In June of 1944, after he had returned from his tour of duty, he was interviewed by his local Omaha, Nebraska, radio station, WOW. 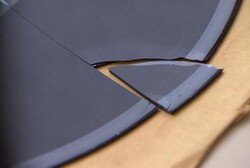 The interview was recorded on two 78 rpm, glass-based instantaneous discs. Glass was used as a base for lacquer discs during WWII when aluminum was in demand for the war effort, making these recordings even more fragile. The family played the records occasionally, and Ray’s son, Ray Jr. remembers hearing the audio when he was a boy.  Since that time, both discs have become cracked or broken, but the family has kept them in hopes that there might be some way to recover the sound.

Matt Skryja, Ray Jr.’s son, knew little of his grandfather’s wartime experiences, since Ray died when Matt was only eight years old.  Over the last decade, Matt has been researching his grandfather’s time in the service, and has learned much of the story. But there was one vital clue still to be uncovered:  the recording of his grandfather’s voice that remained locked inside the two damaged 78’s. 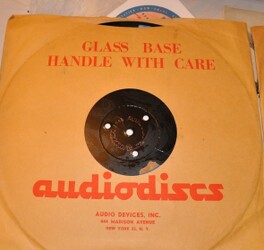 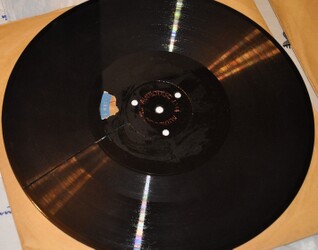 Matt learned about NEDCC’s new IRENE service and arranged to send the discs to the Center for transfer. He eagerly awaited the resulting audio. The IRENE technology uses digital imaging to safely retrieve sound from acoustic recordings on grooved media without touching them. IRENE offers new hope for preserving the audio on rare or unique recordings, as well as on broken or damaged discs and wax cylinders. Learn more about IRENE. 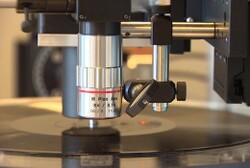 NEDCC Audio Preservation was able to image the grooves of the broken discs with good result, by carefully aligning the cracked and broken pieces on the IRENE 2D system’s turntable. After some manual tracking of the groove lines for the images, and using the system’s automatic stitching software, IRENE translated the images into sound.

The NBC TV affiliate in San Francisco heard about the family's plan to have the discs transferred using NEDCC’s IRENE and asked to broadcast a segment on the story for the highly-regarded Bay Area Proud series with reporter Garvin Thomas.  Thomas filmed father and son listening to the recovered audio for the first time. As you’ll hear, Matt and his Dad were most struck by how young Ray sounded, and how calmly he spoke about his 50 dangerous missions in B-24 Liberators. The story was broadcast in October 2014. (See Media Gallery for the link to the NBC Bay Area Proud story.)

The Family Reflects on the Importance of the Recordings 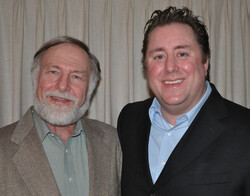 Some time had passed since Matt and his Dad first heard the recordings, and they have now listened to the audio many times. We asked them to tell us what the newly re-discovered audio recordings meant to their family.

My first memory of the recordings is from about 1952. My father and grandfather were listening to one of the discs, which at the time was still unbroken. Around then, I played it myself a few more times, but until now the words remained only a child’s memory. The family would speak of the records every so often, but we didn’t know what to do about the cracks. I am sure, had we been able, we would have played them more – especially since my Dad died so young.

My Dad never spoke much about his war experiences, but besides the thrill of hearing his voice again, there is also a sense of sadness at not being able to talk to him about the interview and to come to an even closer understanding of what sort of man it took to get through it all. 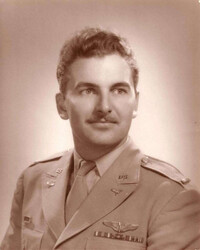 It was special to hear my grandfather speak briefly about the raid over Ploesti. That is one our family has spoken about often. The most startling piece of audio was when he mentioned how German fighters fired rockets at the bombers. Given that the war was still on at the time of the recording, he played it pretty close to the chest in the interview. However, the story about the rockets revealed how deadly and potentially terrifying flying in a WWII bomber could be.

The war stories aside, there is a very brief piece of audio that means more to me than all the others. At one point, my grandfather chuckles. It is just a slight bit of nervous laughter that lasted maybe half a second – but it spoke volumes. It added character and personality to the interview. I got to hear, just for a moment, what he sounded like when he wasn’t speaking formally to the reporter. It was an awesome experience.

AUDIO CLIPS FROM THE JUNE 1944 INTERVIEW WITH RAY SKRYJA:

Interviewer:  “Ploesti was probably one of the most interesting of all the missions, wasn’t it?”
Ray: “Well, it was. That was one of the ones I really wanted to get on. . .”

Interviewer:  “What was the worst in the way of enemy fighters?”
Ray:  “These rocket-firing planes were the worst. . .”

Interviewer: "What about the fellas, have they been thinking and talking very much over there about whether or not there’ll be jobs, what kind of jobs there will be [when they get back?]”
Ray:  Oh, yes . . . Well, they have their doubts about there being enough jobs to go around . . . they’re afraid of these women taking their jobs, heh-heh…”
Interviewer: “Heh-heh, I see. They probably have some pretty determined plans to see that there are jobs.”
Ray: “Oh, yea, they’re trying to figure out a way…”

WATCH THE NBC TV BAY AREA AFFILIATE'S STORY ABOUT THE SKRYJA FAMILY, which was broadcast on October 29, 2014:

Many thanks to Matt and Ray Skryja Jr. for their willingness to share their family's history with us and for all their help in preparing the story.

NEDCC is grateful to the Institute of Museum and Library Services (IMLS) for their support in creating the new IRENE Audio Preservation Service. The IRENE technology was developed by the Lawrence Berkeley National Laboratory and tested at the Library of Congress.

'IRENE' is the acronym for 'Image, Reconstruct, Erase Noise, Etc.' and was so named because the first sound retrieved with the system during its development at Berkeley Lab was a recording of “Goodnight Irene” by the Weavers.