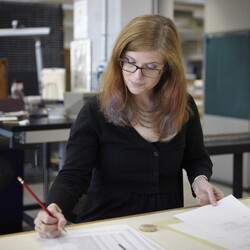 Bexx Caswell-Olson has over ten years’ experience in the preservation and conservation field, and previously served as Special Collections Conservator at Michigan State University. She has operated her own business, White Sparrow Bindery, since 2008. Bexx confers with NEDCC clients to develop appropriate book conservation treatment proposals and manages the Center’s team of talented book conservators. She is an approved CAP Assessor for the Collections Assessment for Preservation (CAP) Program through the American Institute for Conservation. Bexx earned a Certificate in Bookbinding from the North Bennet Street School, an MS in Library Science with a focus on Preservation Management from Simmons College, and a BA in Non-fiction Writing and Journalism from Eugene Lang College, New School University. Bexx is current president of the Guild of Book Workers and a Professional Associate of the American Institute for Conservation (AIC). 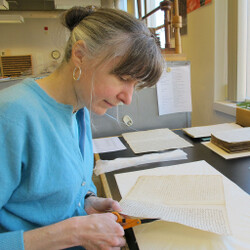 Jessica Henze first came to NEDCC as a summer intern in 2005. She also served as an intern in book conservation at the Carolina Rediviva Library at the University of Uppsala, Sweden in 2006. Since joining the staff of NEDCC in the fall of 2006, Jessica has served as the National Endowment for the Arts Conservation Intern and the Samuel H. Kress Foundation Conservation Fellow. Jessica earned a diploma in Bookbinding from the North Bennet Street School, and a B.A. in Anthropology from the University of New Hampshire. She is a Professional Associate of the American Institute for Conservation (AIC) and a member of the Guild of Book Workers. 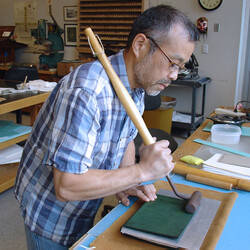 Kiyoshi Imai has been working in NEDCC's Book Conservation Laboratory since 1989. He specializes in the treatment of a variety of bound materials, including parchment and full leather bindings, and is an expert in leafcasting. His particular interests include Asian bookbinding structures and papermaking. Kiyoshi received a diploma in Bookbinding from the North Bennet Street School, and he is a Professional Associate of the American Institute for Conservation (AIC). 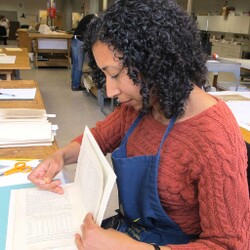 Audrey Jawando has worked in the field of paper and book conservation since 2000. She has a BA in Art History from Stanford University and earned a diploma in Bookbinding from North Bennet Street School. She worked as a conservation technician and archives assistant for the Frederick Law Olmsted National Historic Site and has participated in internships at the Boston Athenaeum and at NEDCC. Her special interests include 17th–19th century decorative papers; she assisted in the cataloging and housing of the Loring Collection of Decorated Papers at Harvard’s Houghton Library. 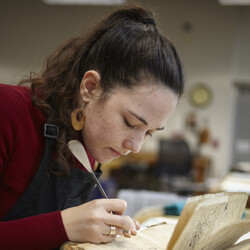 Jane Knoll has studied bookbinding since 2013 and received her diploma from North Bennet Street School in 2021. She holds a BA in Creative Writing and Printmaking from Bennington College. She worked as the von Clemm and Driscoll Family Fellows in Book Conservation at the Boston Athenæum before joining NEDCC in 2022. Jane studies historical book structure with special interests in seventeenth- and eighteenth-century bindings, folk repairs, and personalized bindings. 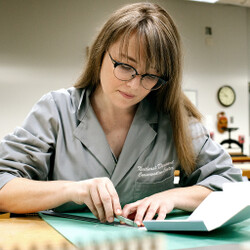 Amelia completed a book conservation internship at NEDCC in 2009, as well as internships at the New England Historical Genealogical Society and the Boston Athenaeum in 2010. She returned to NEDCC to serve as the Samuel H. Kress Fellow in 2010-2011.  Amelia holds a diploma in Bookbinding from North Bennett Street School, and earned a Certificate in Museum Studies at Harvard Extension School where she interned at the American Textile History Museum. She is a graduate of Lewis & Clark College with a Bachelor of Arts in Economic History where she studied abroad in St. Petersburg, Russia. She is a Professional Associate of the American Institute for Conservation (AIC) and a member of the Guild of Book Workers (GBW). Additionally, she works with HarvardX  producing online courses in the humanities, religious studies, and material culture. 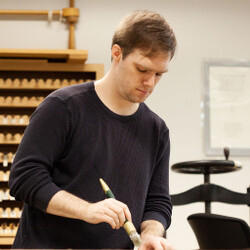 Ned Schultz received a diploma in Bookbinding from the North Bennett Street School in 2018, where he studied the treatment of a wide variety of binding types. He practiced lettering and decorative tooling, finishing, leather rebacks, and protective enclosures.  Ned participated in a workshop on making marbled paper designs for bookbinding, and studied proper documentation of conservation treatments.  One of his fine bindings was recently displayed at the North Bennett Street School Alumni Exhibit.