History of the IRENE Project at NEDCC

In 2013, the Northeast Document Conservation Center was awarded a $250,000 National Leadership Grant from the Institute of Museum and Library Services to develop, test, and demonstrate a new digital reformatting service for early audio recordings on grooved media using IRENE, a system developed by the Lawrence Berkeley National Laboratory in collaboration with the Library of Congress.

During the grant project, NEDCC worked closely with Dr. Carl Haber, Senior Scientist, and Dr. Earl Cornell, Computer Systems Engineer, at Lawrence Berkeley National Laboratory, who led the prior grant-funded initiatives that developed the IRENE technology. In late 2013, a 2D/3D non-contact optical scanning system was assembled at NEDCC's facility in Andover, MA.  Dr. Cornell served as Berkeley Lab's principal point-of-contact with NEDCC throughout this project and was instrumental in training NEDCC’s audio staff and in making important upgrades to the software.

The primary goal of the grant project was to move this technology out of the lab environment and to create a sustainable digital reformatting service for archives, libraries, and museums across the U.S. NEDCC tested the IRENE system on several pilot collections and the pilot project was designed to develop workflow protocols, estimating models, proposal templates, deliverable specifications, and report templates.

Middlebury College Special Collections in Middlebury, Vermont, participated in the project by making available over 250 wax cylinders. The recordings are part of Middlebury College's Helen Hartness Flanders Ballad Collection, one of the nation's great archival collections of New England folksong, folklore, and balladry.  The collection is the lifework of Helen Hartness Flanders (1890–1972) of Springfield, Vt., who, over a period of 30 years, gathered and preserved more than 4,800 field recordings of primarily Anglo-American folksongs and ballads sung by New Englanders. 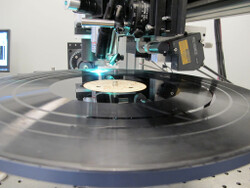 The Carnegie Hall Archives provided a variety of lacquer transcription discs recorded at Carnegie Hall, or published by the Carnegie Hall Recording Company, with content ranging from orchestra works by Ernst Bacon, Paul Hindemith and Nikolai Lopatnikoff to Midnight Jazz Concerts by Oscar Peterson to the 1946 George Gershwin Memorial Concert with performances conducted by Leonard Bernstein.

The Woody Guthrie Archives collection included fifteen instantaneous lacquer discs, the contents of which were unknown.  The Guthrie Archives staff have kept them safely stored, hoping that a technology would come along that would allow these unique recordings to be heard without danger of damage. 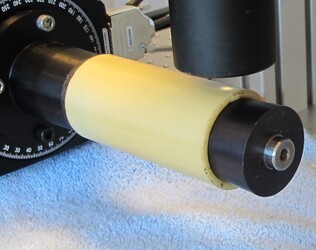 Thomas Edison National Historic Park participated in the pilot project by bringing some of the earliest examples of recorded sound to NEDCC to be imaged with IRENE. Three of the yellow paraffin cylinders were recorded in Edison's laboratory during the first year that the Edison Perfected Phonograph was in use. This early type of cylinder was not used after 1889. (Yellow paraffin cylinder shown at right.)

The New York Public Radio Archives provided a collection of badly delaminating discs to help test IRENE's capabilities for recovering audio from damaged media. Many were fragile glass-based discs  recorded during WWII, when aluminum was in short supply. 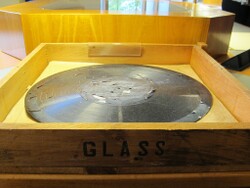 The Woodberry Poetry Room at Harvard brought a number of rare disc recordings of major 20th century poets during readings at Harvard, including Wallace Stevens, Ezra Pound, T.S. Eliot, Randall Jarrell, Robert Frost, and Marianne Moore. Several of these yielded unique versions of the poets' work, which can now be studied by scholars.

NEDCC is grateful for support from:

The Institute of Museum and Library Services is the primary source of federal support for the nation's 123,000 libraries and 17,500 museums. Through grant making, policy development, and research, IMLS helps communities and individuals thrive through broad public access to knowledge, cultural heritage, and lifelong learning.

NEDCC Acknowledges the Major Contribution to the Preservation of America’s Recorded Heritage:

Thanks as always to Dr. Carl Haber and Dr. Earl Cornell of Lawrence Berkeley National Laboratory (LBNL) who worked in collaboration with the Library of Congress to develop the IRENE technology, and who worked with NEDCC in assembling and testing the Center's IRENE's system. LBNL addresses the world's most urgent scientific challenges by advancing sustainable energy, protecting human health, creating new materials, and revealing the origin and fate of the universe. Founded in 1931, Berkeley Lab's scientific expertise has been recognized with 13 Nobel prizes. The University of California manages Berkeley Lab for the U.S. Department of Energy's Office of Science.

'IRENE' is the acronym for 'Image, Reconstruct, Erase Noise, Etc,.' and was so named because the first sound retrieved with the system during its development at Berkeley Lab was a recording of “Goodnight Irene” by the Weavers.