In January 2019, a team of three conservators and one collections photographer from NEDCC arrived at Jekyll Island off the coast of southern Georgia to begin a multi-phase project to preserve a Chinese export wallpaper installed on the ceiling of one of the island’s historic homes. The project would encompass the removal and rehousing of the bamboo framework and wallpaper panels on-site and the treatment of a single wallpaper panel at NEDCC, as discussed in Part 1 of the story.

The final phase of the project entailed creating reproductions of the historic wallpaper that could be re-installed in the historic home. (Learn more about the history of the Jekyll Island Club.)

While wallpaper treatments are notoriously challenging for a number of reasons, this project had additional challenges that meant the conservators and imaging staff had to be creative in their approaches to removing, rehousing, and reproducing the historic wallpaper.

With the selected section of wallpaper fully conserved, the third phase of the project – digitization, digital restoration, and reproduction – began. The treated wallpaper section was placed on the Center’s 4’x8’ ‘X/Y table’, which is used for digitizing large format materials. To achieve the target resolution of 600 ppi for the Preservation Master file, the wallpaper was imaged in multiple overlapping sections and then those multiple images were stitched together in Photoshop. 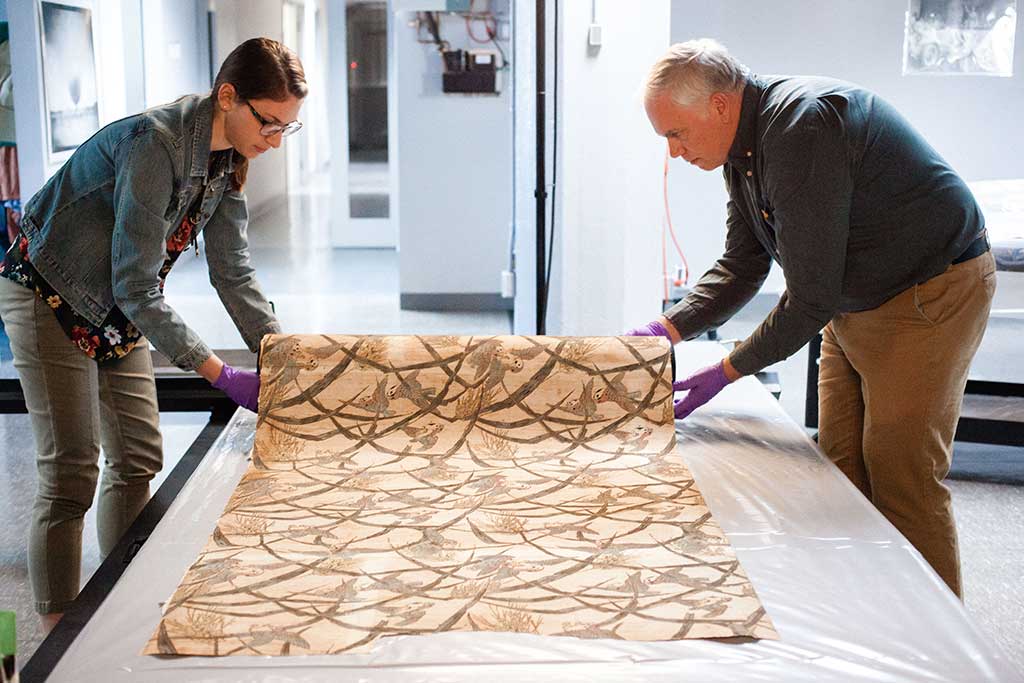 Collections photographers unroll the section of treated wallpaper for imaging.

The Center’s X/Y table facilitates this workflow by moving along horizontal and vertical axes while a medium format camera and electronic strobes remain stationary overhead and on either side. For this wallpaper, the X/Y table was covered in plastic prior to imaging to prevent contamination from the paper’s arsenic-based pigments. 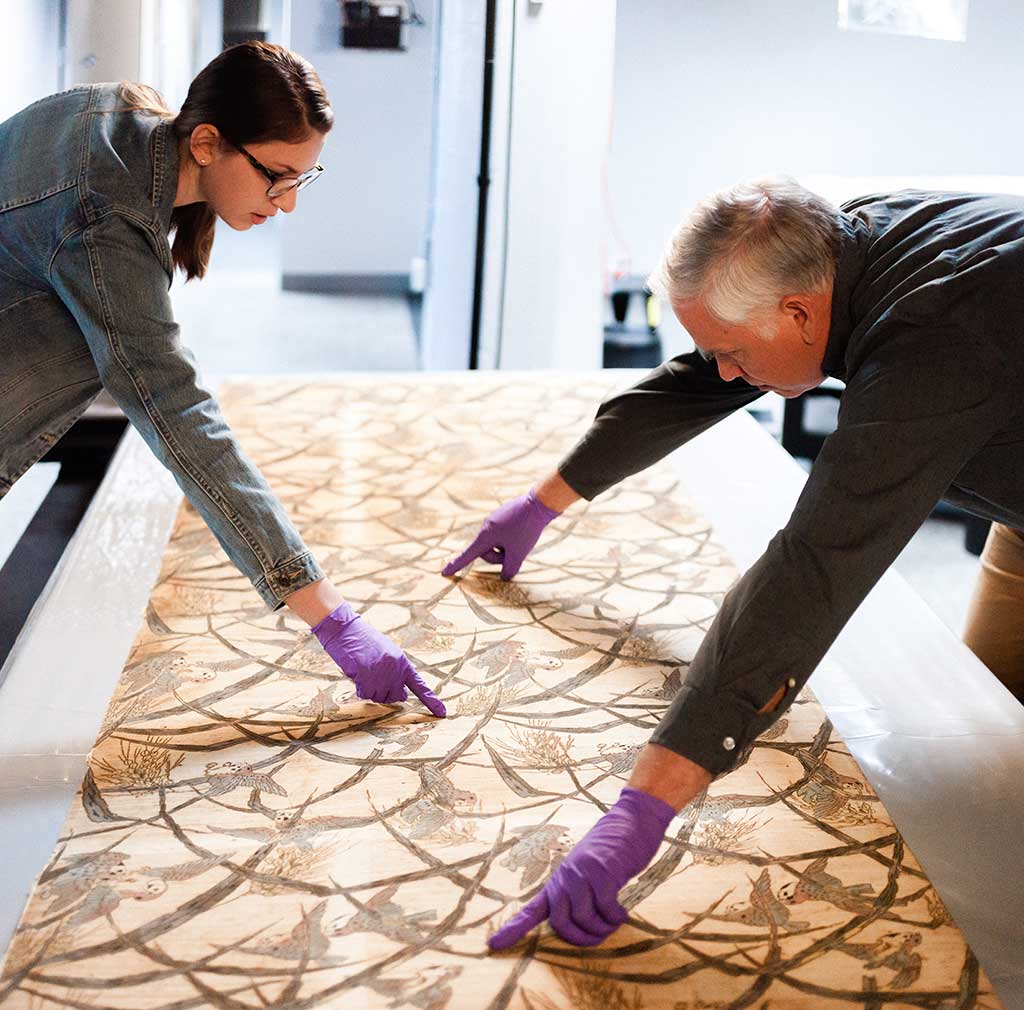 The image stitching itself requires considerable time beyond the initial image capture. While Adobe Photoshop includes the Photomerge tool, which can merge separate, overlapping images together, the resulting file must be reviewed at 100% magnification along their points of intersection to ensure that the multiple images have joined together seamlessly. In cases where there is misalignment, which occurred in several areas when stitching the Jekyll Island wallpaper, the photographer must correct the errors. If those errors are significant, the correction may require re-photographing the object or ‘manually’ aligning and blending the images in Photoshop. When stitching images of the Jekyll Island wallpaper, errors were thankfully minor and could be corrected using less involved methods than starting over from scratch. Even though the image stitching process is painstaking and time consuming, it proved the most straightforward step in this third phase of the project.

Once the foundational image of the conserved wallpaper had been stitched and had passed quality control, the digital restoration work could begin. 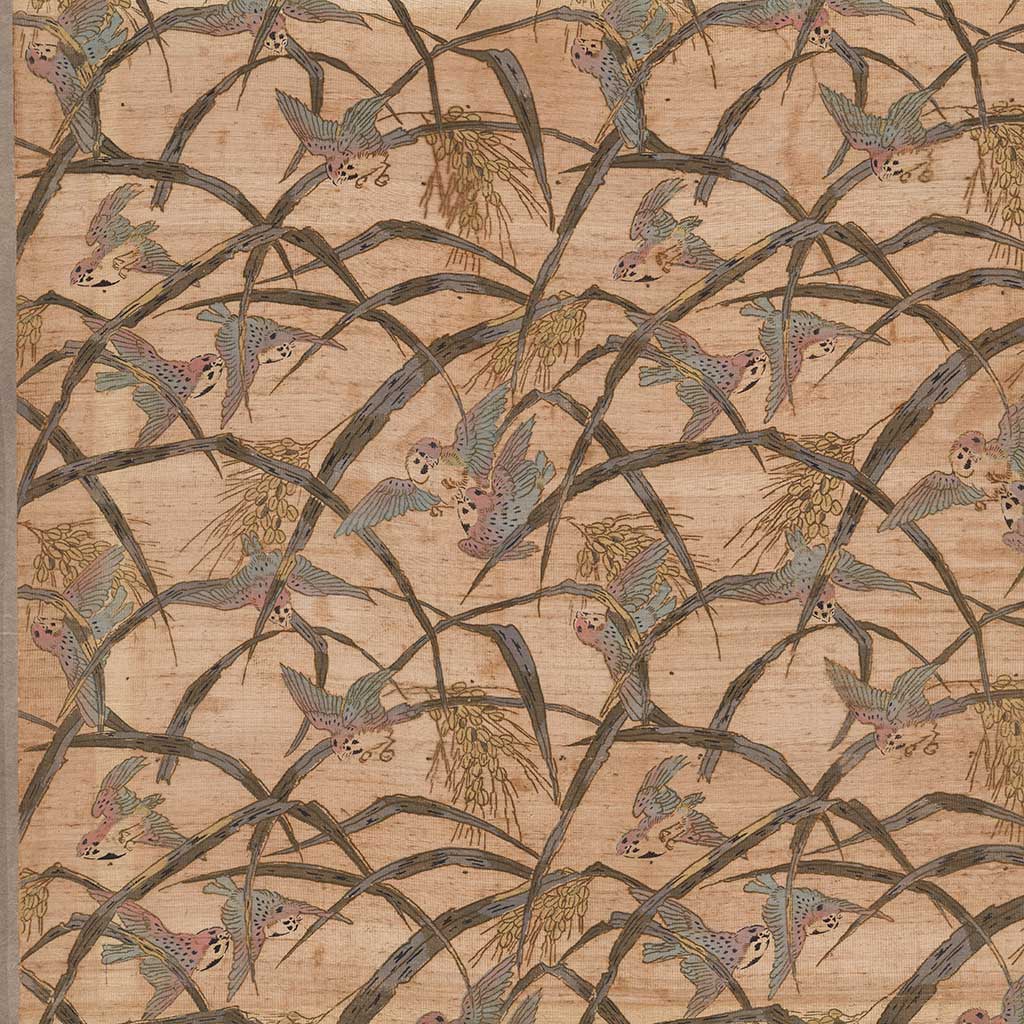 Wallpaper after conservation, prior to any digital restoration 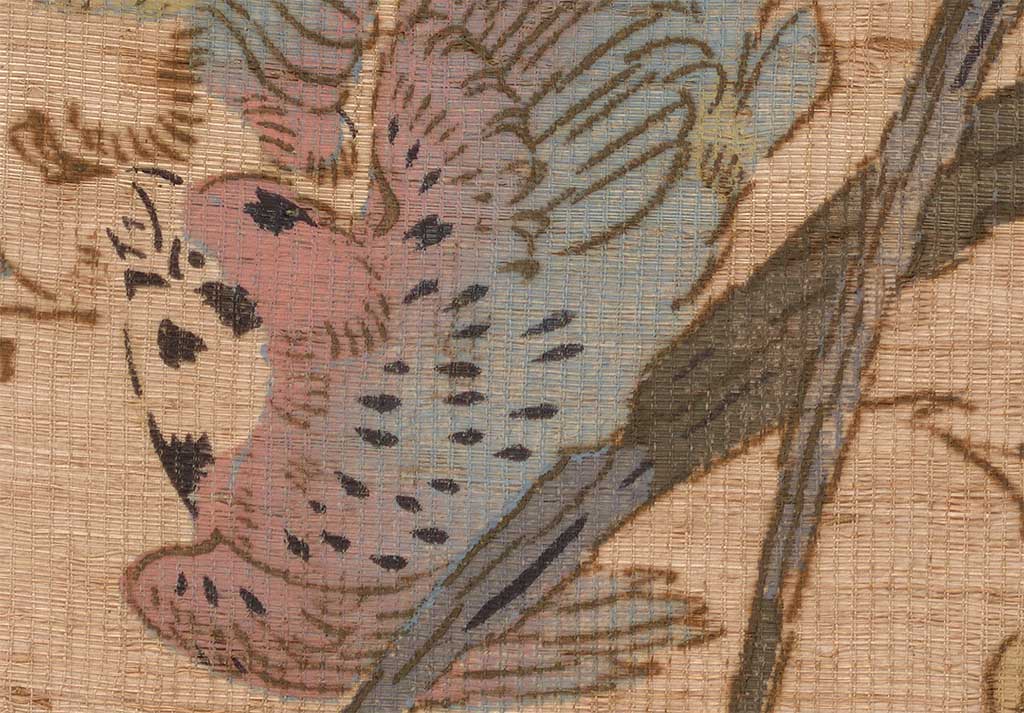 Detail of wallpaper prior to digital restoration

Photoshop was again used, though in this stage to improve the overall appearance of the paper and to remove stains and defects that would have been noticeable when the repeat was iterated to form extended lengths of wallpaper. Various selection tools were utilized to isolate the background, birds, shafts of wheat, and bamboo leaves into separate image layers, which then allowed each of those visual elements to be digitally restored independently of the others. 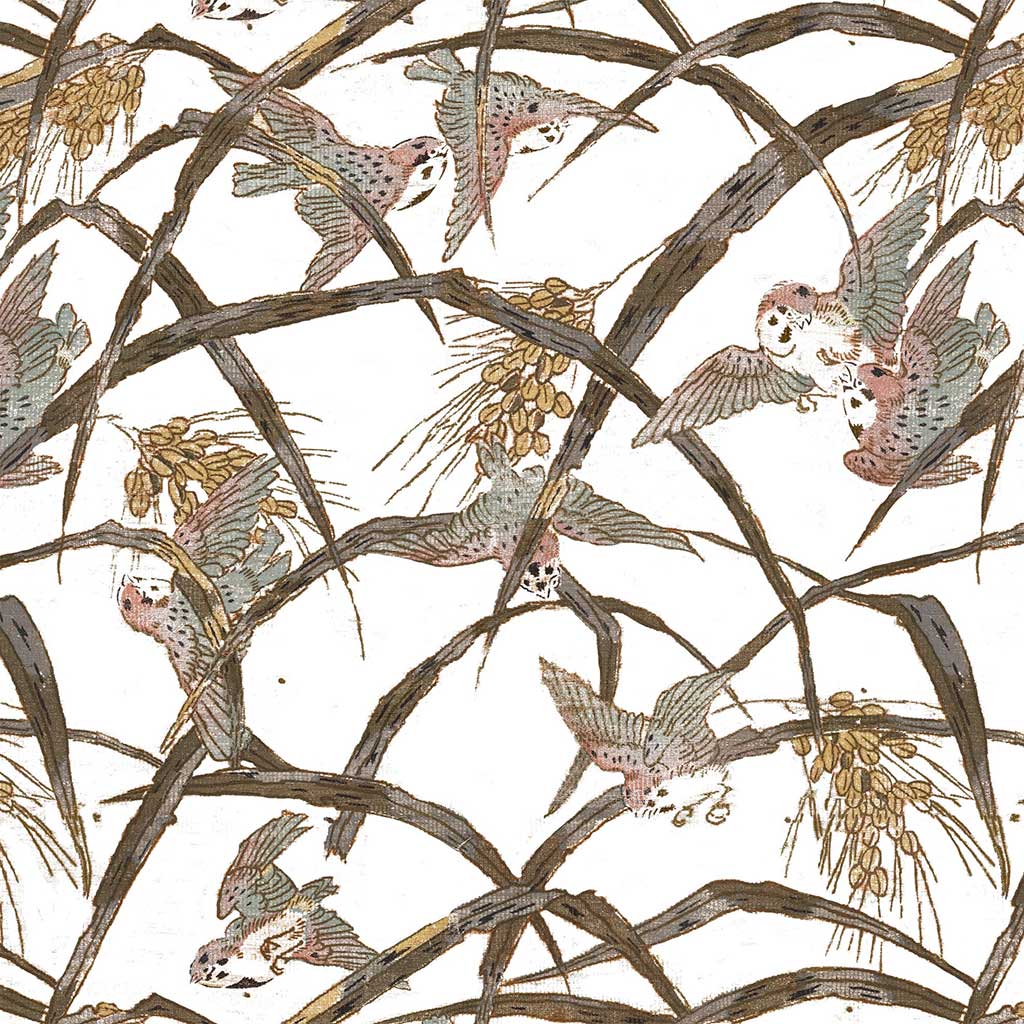 Pattern elements selected and isolated from the background, prior to any digital restoration

With the separate elements of the pattern isolated, the next step was to lighten and improve the brightness of the wallpaper’s tan-colored background, and remove the effects of decades of accumulated light damage and deterioration that could not be fully addressed by the conservation treatment. Discrete stains, separate from the general discoloration, were also removed from the background at this stage of the restoration process. 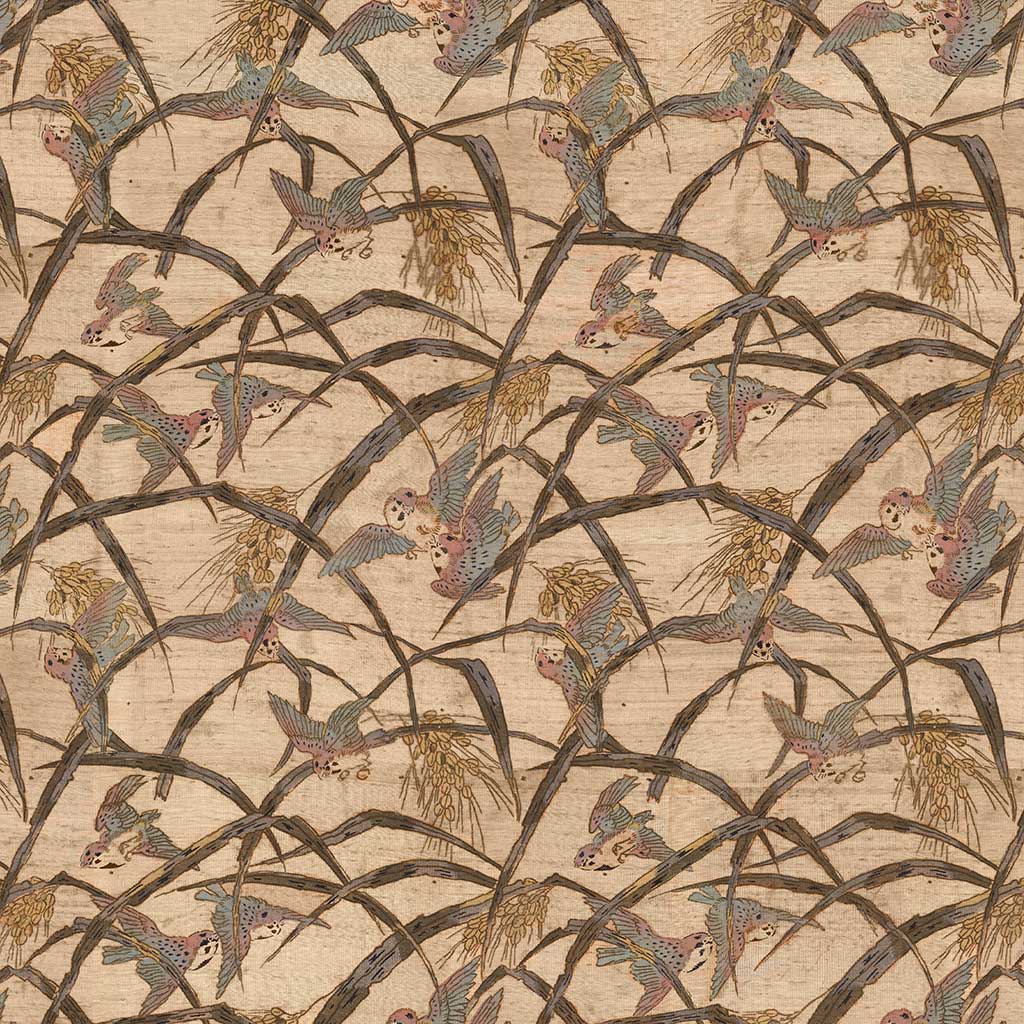 Wallpaper with background digitally brightened, no stain removal, and no changes to the pattern elements 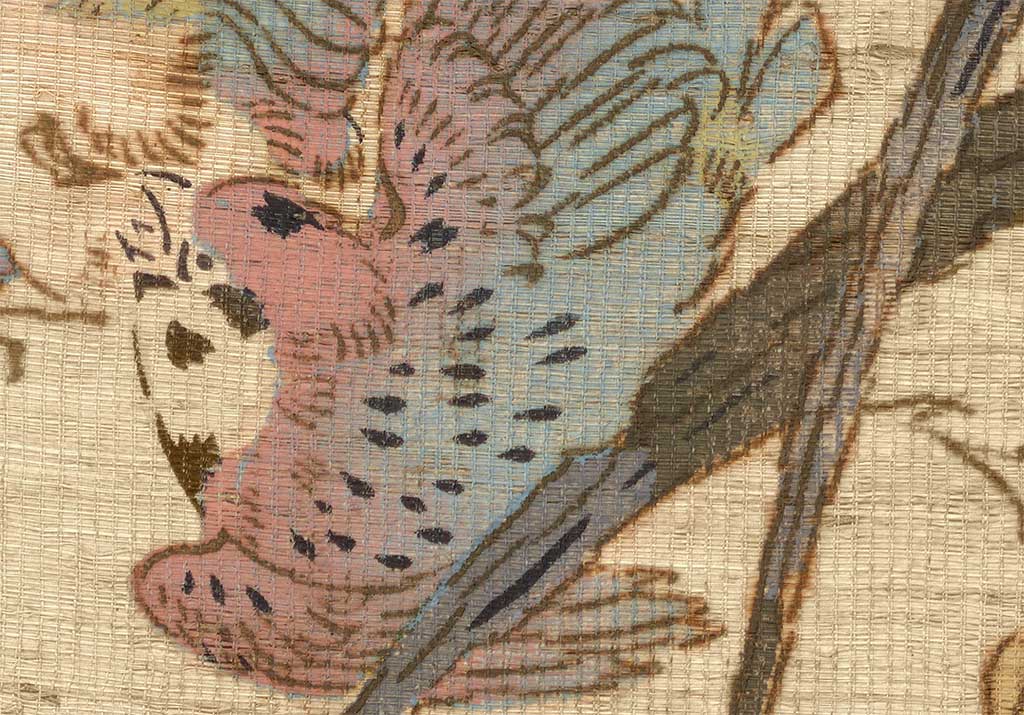 Detail of wallpaper with background brightened

Now that the background had been ‘cleaned up’, the next step was enhancement of the pattern elements themselves. To inform this color restoration work, the photographer was able to sample areas of the wallpaper that had been protected by the bamboo framework. These areas exhibited considerably less discoloration, presumably the result of a combination of light damage and embedded grime, than the rest of the paper. The photographer could then adjust the colors from the un-protected portions of the pattern to match the samples taken from the protected portions. Because the wallpaper was block printed, the pattern included seven  separately printed pigments with minimal blending, which facilitated this targeted color enhancement work. The goal of the process was a homogenous brightness and saturation for each color across the extent of the pattern, but one much more in keeping with the assumed appearance of the wallpaper within years after installation, rather than after decades.

The most noticeable improvement resulting from this color enhancement effort was to the bamboo leaves. The initial survey noted that the leaves were composed of a steely blue color and as well as a dark, muddy, greenish-brown color that seemed a particular outlier given the otherwise vibrant color pallet of the design. And even after undergoing full conservation treatment, the appearance of this muddy green/brown did not change significantly. Given the conservators’ experience with Chinese wallpapers from this period and the pigments they used, NEDCC was fairly confident following the initial survey that this greenish-brown originated as a bright grass-green comprised of copper-based pigments. Copper is notoriously reactive, and so the years of accrued deterioration led to the irreversible discoloration NEDCC observed in the pattern.

Upon receipt of the wallpaper at NEDCC, the Center commissioned pigment analysis from the Boston Museum of Fine Arts that confirmed the copper-base of this particular color. With this information the photographer evaluated a number of comparable copper-based pigments originating in China from the same time period, though without the extreme discoloration. With the input of the paper conservators, and with the approval of Jekyll Island staff, a much less discolored lighter-green, derived from the sampled pigments, was chosen to essentially replace the greenish-brown. With careful selection and masking, the photographer was able to adjust all areas of similar color in one adjustment layer in Photoshop. This decision significantly improved the overall appearance of the wallpaper pattern and brought it more in-line with its presumed as-printed state. 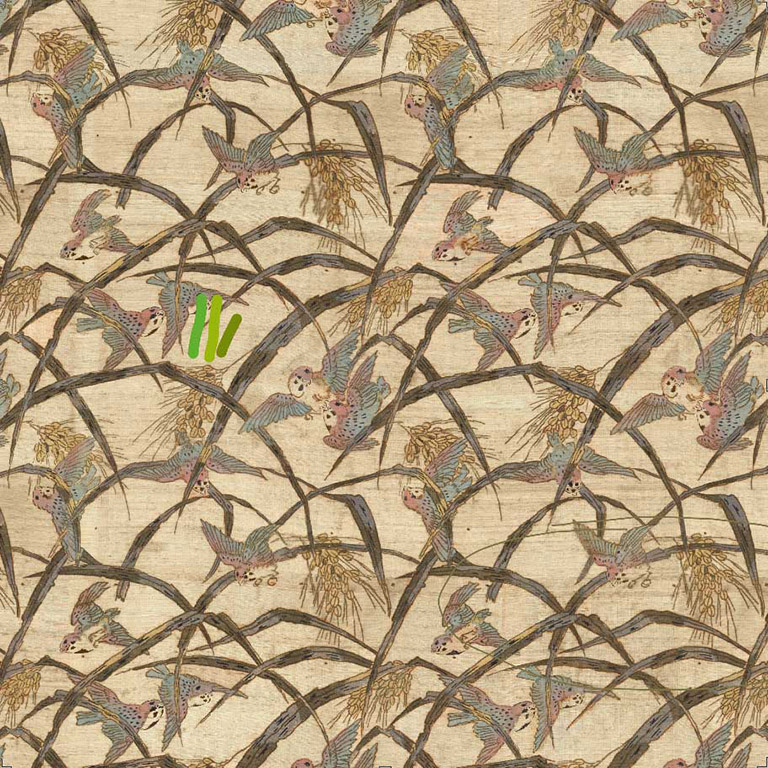 Wallpaper with options for adjusting the green pigment, based on samples 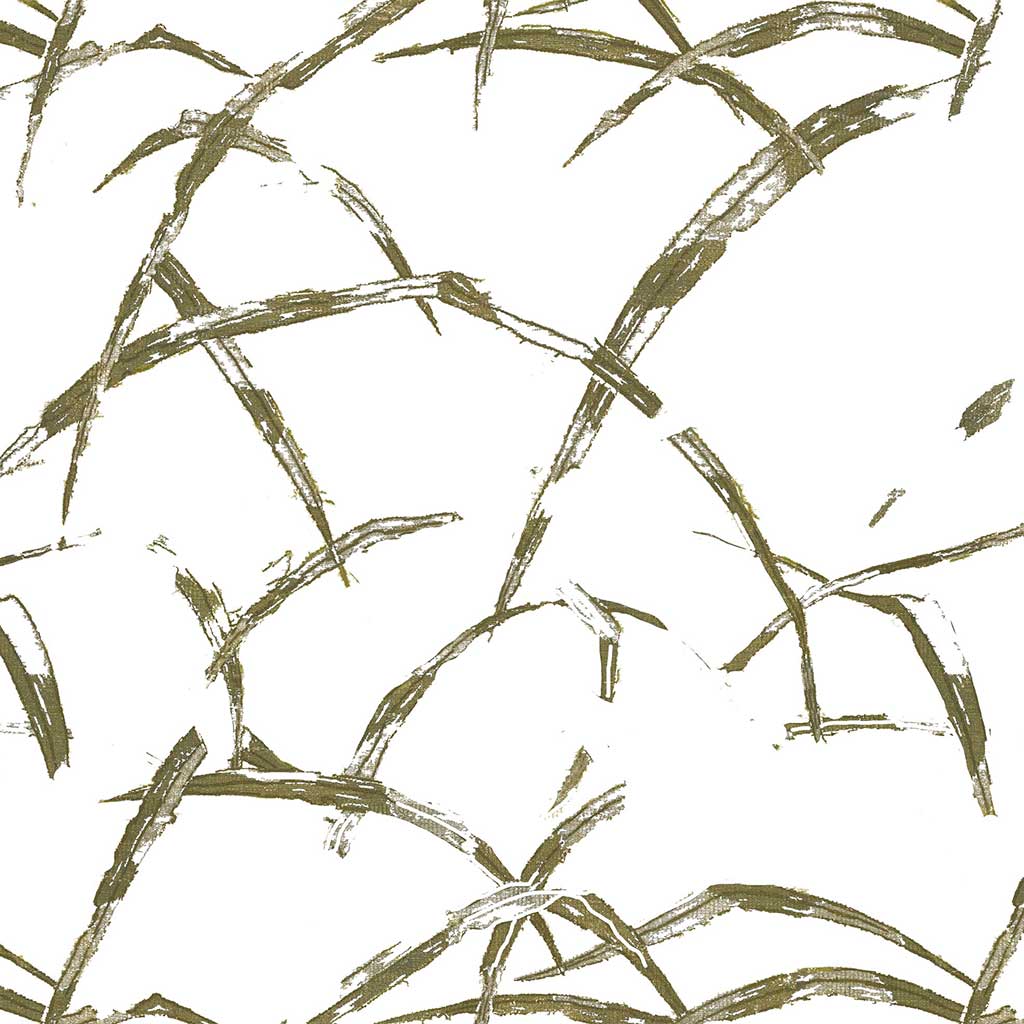 Leaves selected and isolated, with original gray-green replaced by the copper green preferred by the paper conservator

Having completed the strain removal and color restoration, the photographer could reconstruct the pattern. To do so, a single enhanced motif was then duplicated and stacked until the desired length of the repeat was achieved. The finished length was then repeated again twice and positioned against the left and right side of the master file. This approach to building-out the pattern ensured that its repeats came together as seamlessly as possible. Even with this effort there were some small areas of mis-registration but these were easily corrected in Photoshop. The restored pattern was supplied to Jekyll Island staff electronically for initial approval, and once received allowed NEDCC to proceed to printing. 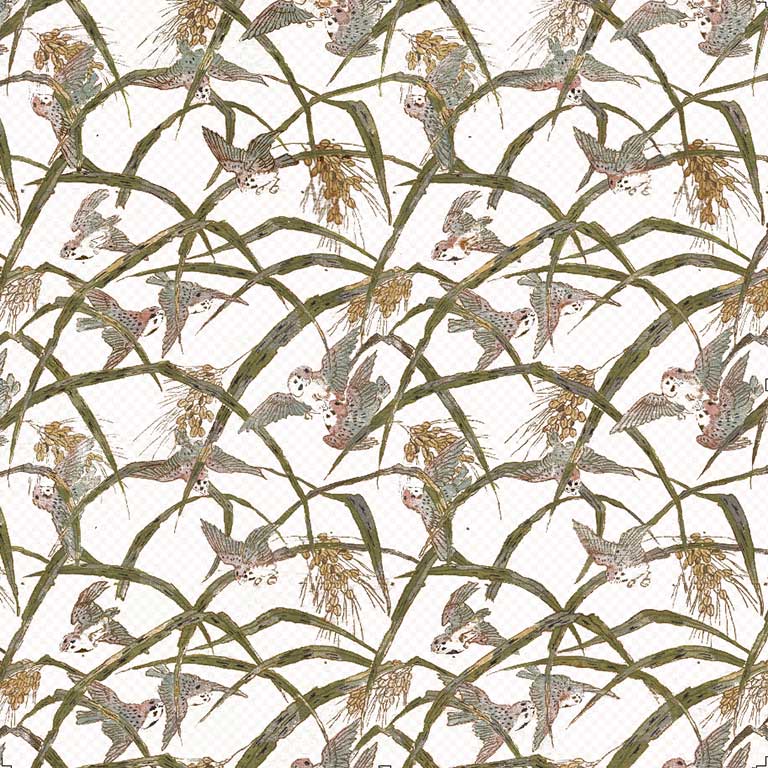 Pattern elements selected and isolated, including all restoration 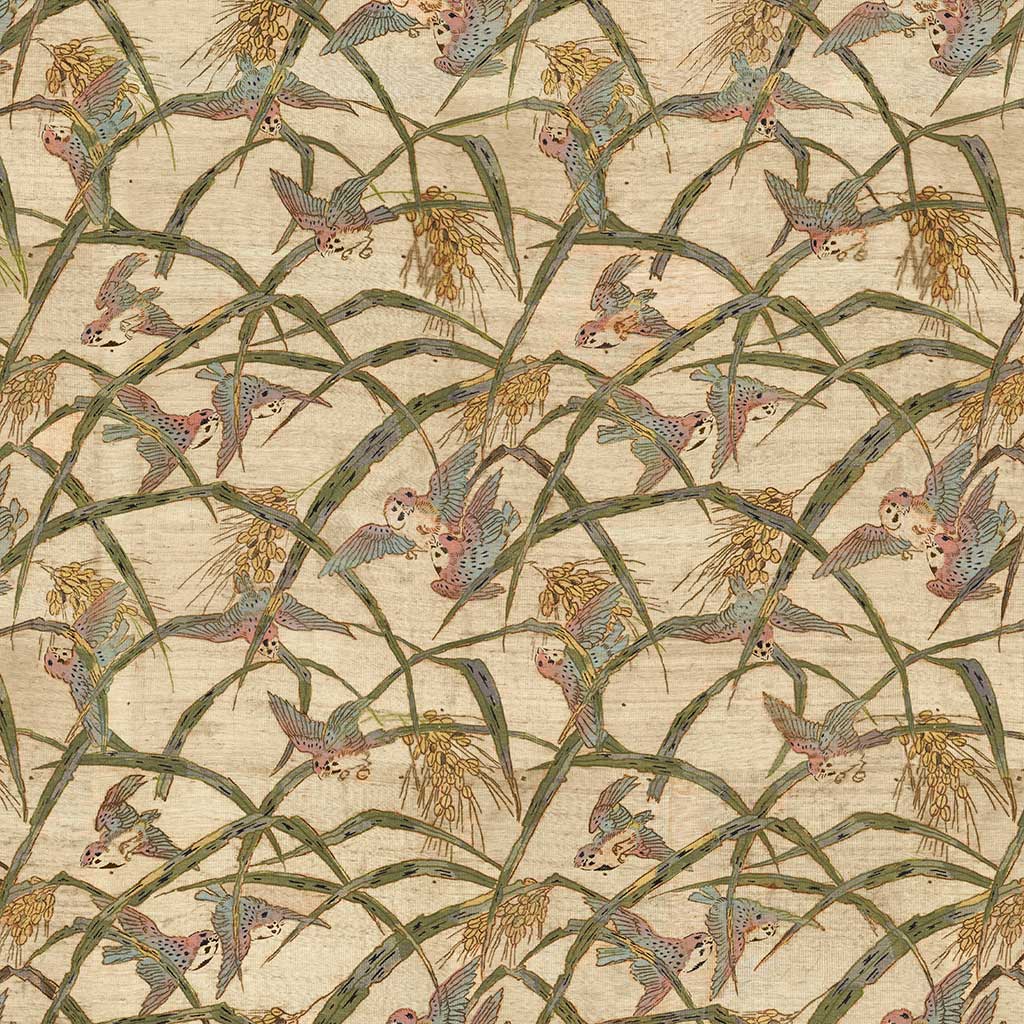 Wallpaper with all restoration incorporated 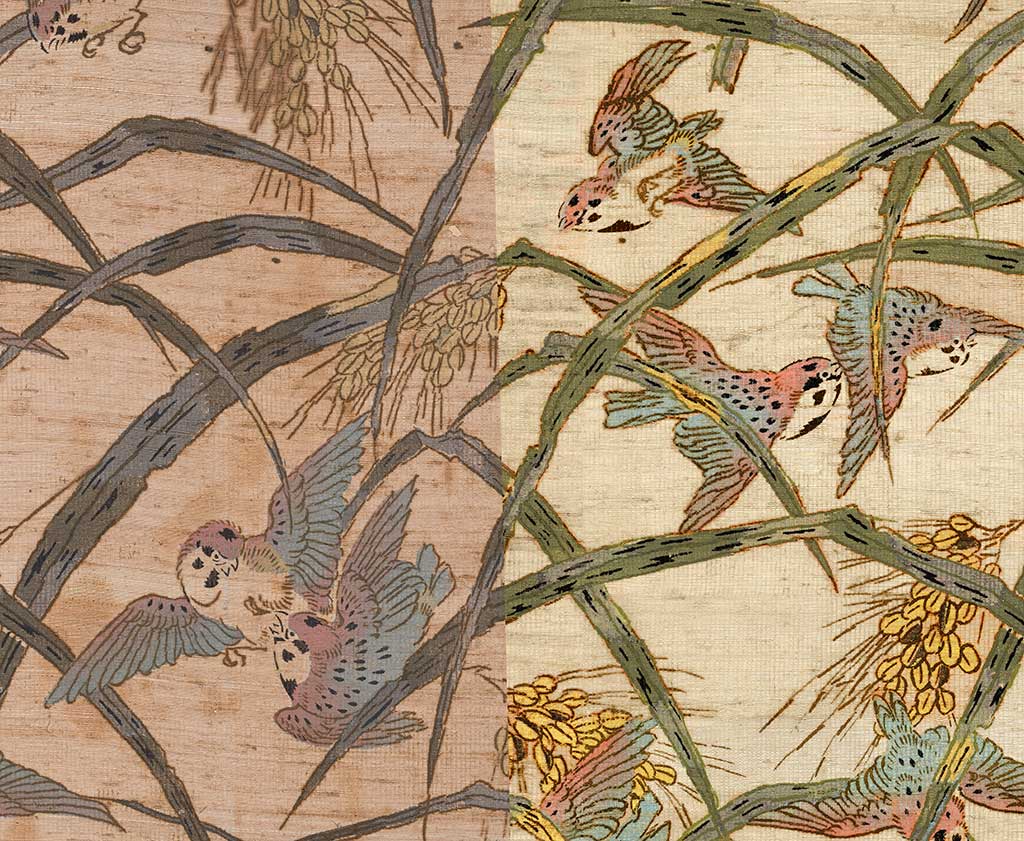 Comparison detail showing wallpaper before conservation and after digital restoration

Selection of an ideal paper for the reproductions required extensive research and testing. Following NEDCC's initial consultation, Jekyll Island staff requested a paper that could be installed by a local wallpaper hanger, but that possessed as many ‘archival’ qualities as possible to ensure longevity. Based on prior testing, the truly archival fine-art papers, those typically used for NEDCC’s reproductions, would not be suitable for installation by a wallpaper hanger due to their tendency to both expand significantly and to weaken/tear when following traditional wallpaper installation methods. So, an alternative paper, one designed to receive the more stable pigment-based inks used by NEDCC and that could be installed without a team of conservators, was required. 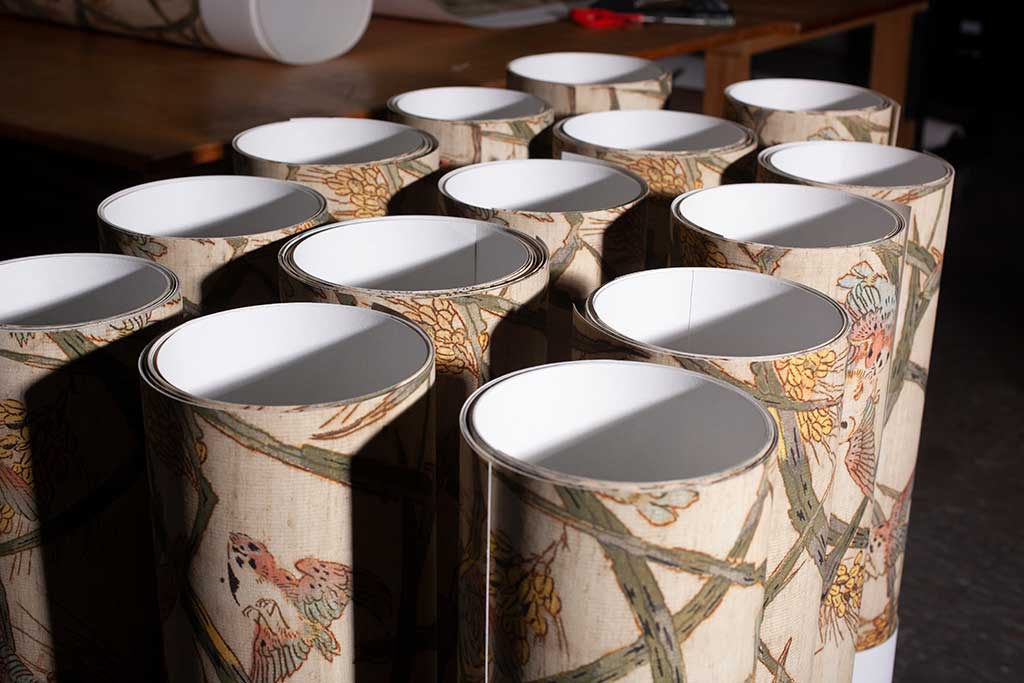 From these tests the conservators determined that “Wall-Art”, a paper manufactured by Permajet and designed for installation as wallpaper, would be the best choice given the project’s requirements. Wall-Art has a weight of 170 gsm, a matte surface, and a base material composed of a combination of polyester and cellulose in a ratio of 1:4, improving its dimensional and structural stability relative to a paper comprised of 100% cellulose. The paper is also compatible with NEDCC’s Epson wide-format inkjet printer and Ultrachrome pigment-based ink. NEDCC also created a custom printer  profile for the Wall-Art paper which would improve color accuracy in translating the digital image to the physical wallpaper.

With the paper selected the photographer produced several large sample prints, each with varying degrees of saturation applied globally and to specific colors within the pattern. These samples were then shipped to the Museum so that they could be evaluated in-situ and a selection made based on the actual viewing conditions under which the wallpaper would be installed. After several iterations of adjustments and feedback, Jekyll Island staff chose a sample with a moderate increase in saturation, particularly in the pattern’s yellows and pinks. With the print file finalized, production could begin.

The Center’s Epson 9900 Stylus Pro printer was used for printing. NEDCC printed the reproductions in 35” wide x 14-foot lengths, exactly matching the width of the original paper and with the length derived from the height of the ceilings (12 feet), plus 2 additional feet to allow for proper alignment during the installation process. These custom-length drops facilitated installation by minimizing handling, cutting, and waste. A total of 560 linear feet, or just over 1,555 square feet, of reproduction wallpaper was produced, enough to cover the ceiling as well as the room’s 4 walls. 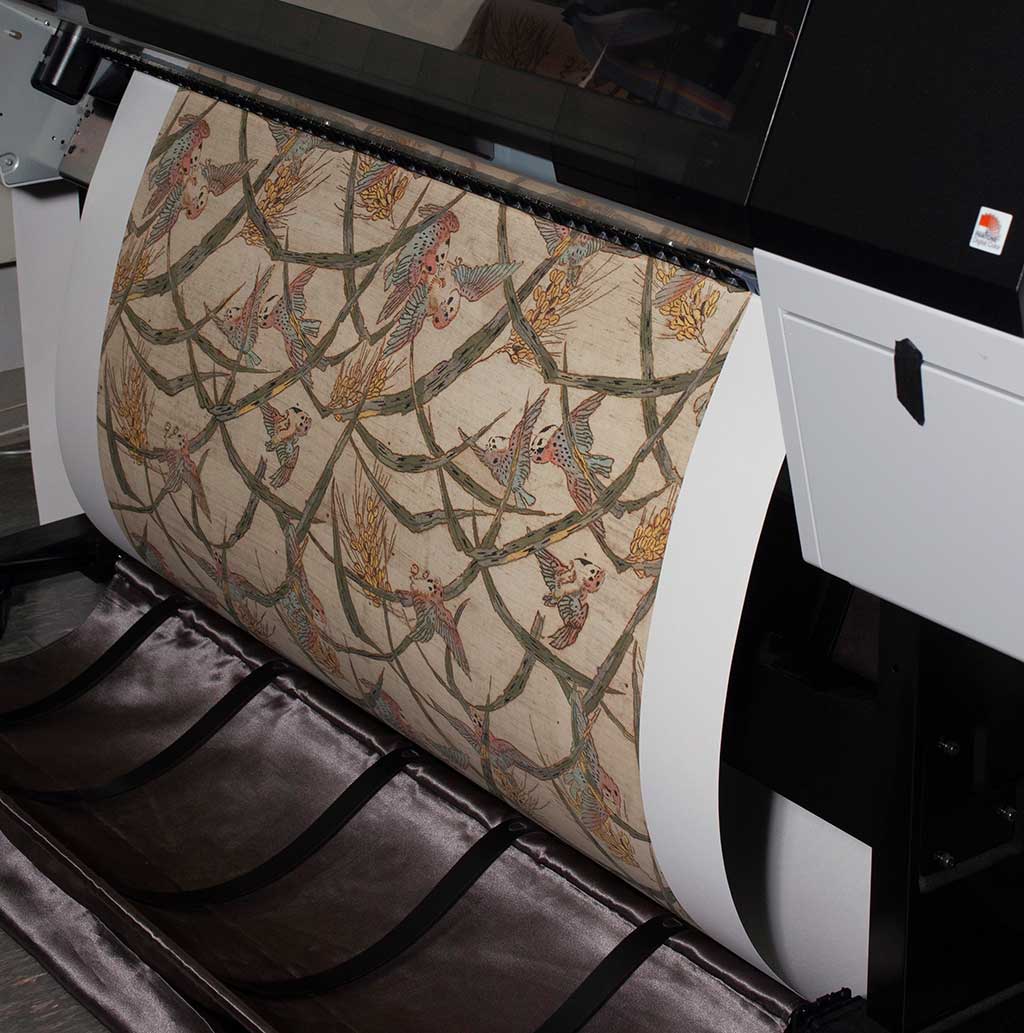 Printing a drop of reproduction wallpaper

Drops were hand-trimmed flush to the printed image, rolled onto tubes, and shipped to the Museum for installation at their convenience. NEDCC also delivered the fully restored print master file alongside the preservation master file, which will allow the museum to commission additional prints in the future, if required. 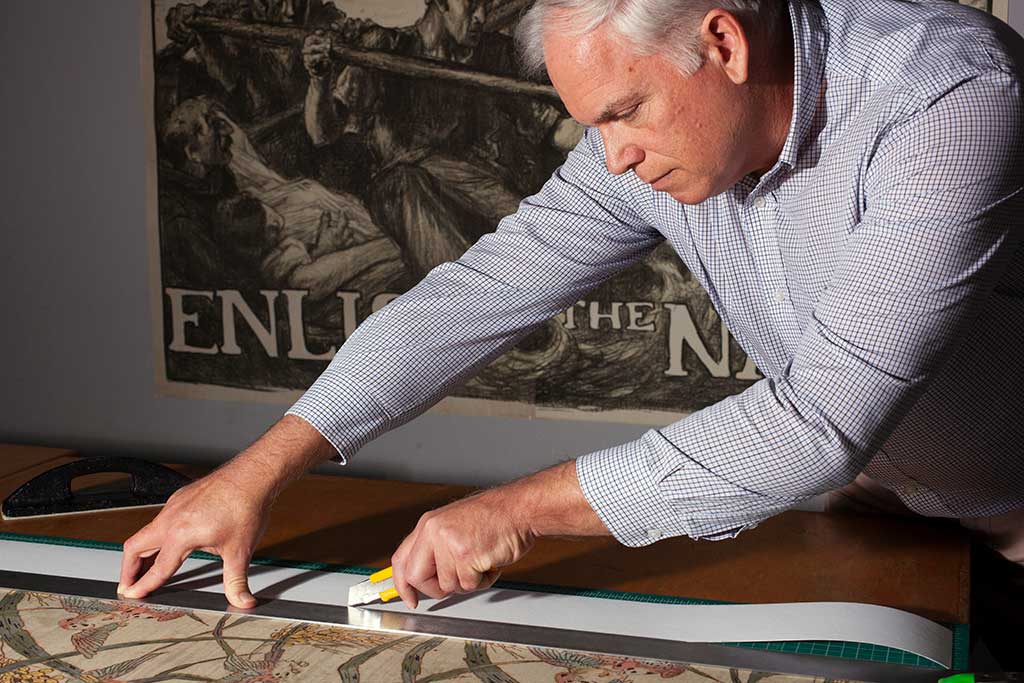 Trimming a drop flush to the printed image

Jekyll Island staff have installed NEDCC’s reproduction wallpaper onto the ceiling at Mistletoe Cottage and re-installed the original bamboo lattice based on NEDCC’s documentation during its removal. At a future date the Museum is considering papering the walls as well, bringing the room much closer in effect to its original late 19th/early 20th century appearance. NEDCC staff members are looking forward to returning to Jekyll Island for a follow-up visit to both see the installed wallpaper in-person and to complete the project’s documentation. 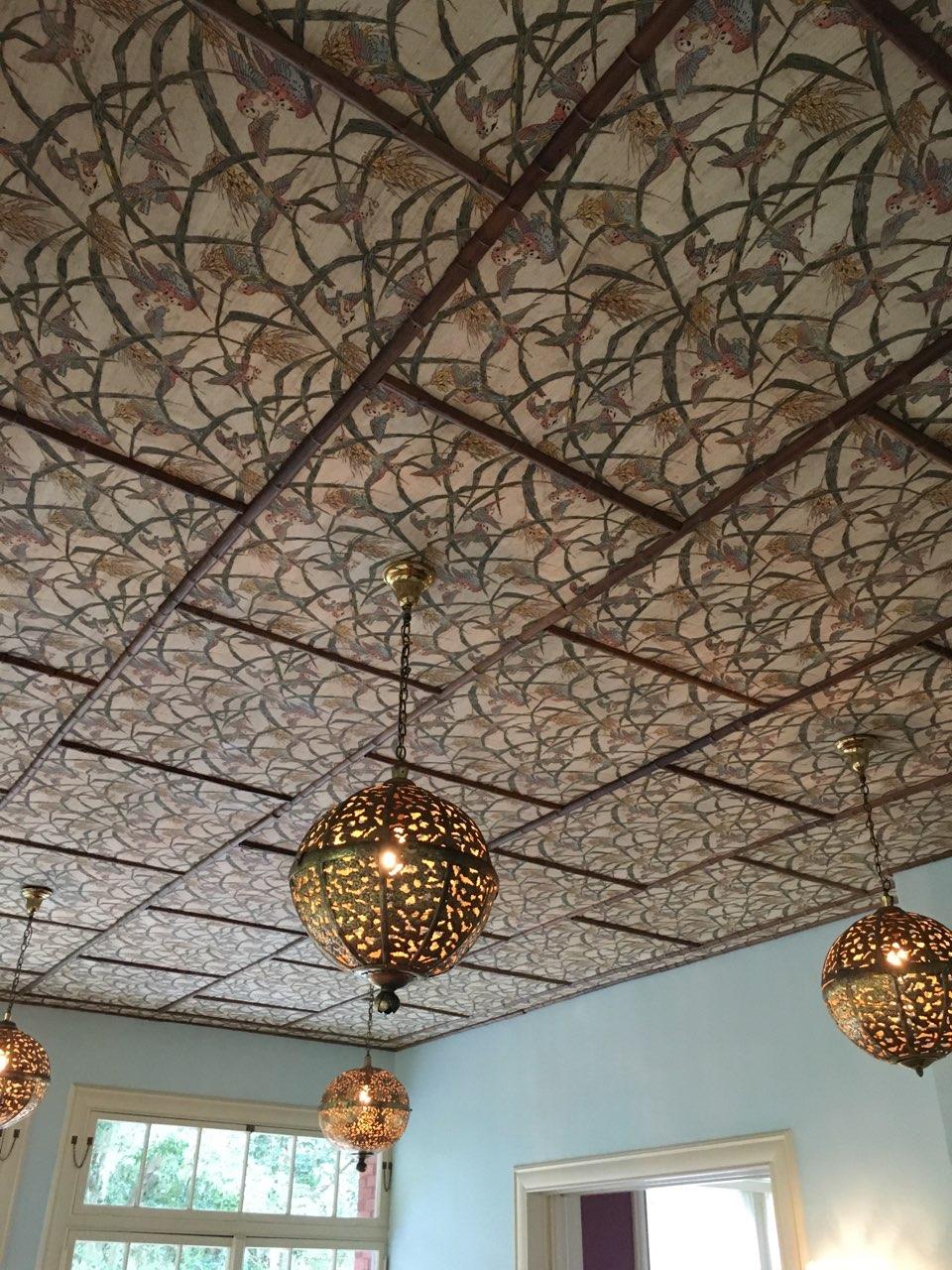 The project to de-install, conserve, and reproduce the Chinese export wallpaper for Jekyll Island’s Mistletoe Cottage proved a highly successful and highly rewarding project for the Center. It leveraged expertise from across the Center’s conservation and imaging labs in order to both preserve the original wallpaper and assist the Museum with its historic preservation efforts by creating an installable physical surrogate that helps tell the story of the Cottage and the Island. NEDCC thanks the Jekyll Island Museum and its staff for their trust and input throughout the project's planning and execution.

As of June 2021, special tours of Mistletoe Cottage, highlighting their restoration efforts, have resumed.
Learn More

Kindest thanks to the Jekyll Island Museum staff: Rose Marie Kimbell (former Archivist and Records Manger), Bruce Piatek (Director of Historic Resources), Taylor Davis (Historic Preservationist), and Andrea Marroquin (Curator). Additional thanks to the tour guides who, through vivid storytelling based on historical events, brought life to the historic houses and grounds of Jekyll Island Club.