Dimes for the Constitution - Lots of Them!

When Mary Beth Herkert came to work at the Oregon State Archives in 1984, the state had just finished a “penny drive” to fund the re-guilding of the Oregon Pioneer – the Gold Man – that sits atop the Oregon State Capitol building in Salem.  School children gathered pennies and raised $37,000 toward the effort.  Herkert thought, “Why can’t we do that for the preservation of the state's constitution?” She figured that if every student in Oregon contributed ten cents, they could raise enough money for conservation of the founding document.

In 2014, the “Dimes for the Constitution” effort was launched by then Secretary of State Kate 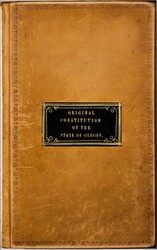 Brown, and the pitch to Oregon students to contribute coins yielded about $7,000.  When the new Secretary of State Dennis Richardson was elected in November 2016, he asked Ms. Herkert what she would like to accomplish for the State Archives.  “No question,” she said, “we'd like to have conservation treatment of the Constitution completed and two cases built, one for the State Archives, and one for the State Capitol, so Oregon citizens could have the experience of viewing the document – their document – in person.”

Well, they did it.

About the Oregon State Constitution 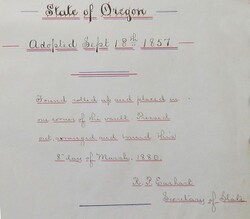 The handwritten pages of the Constitution remained as separate leaves until 1880, when it was bound in full leather.  The inscription on the title page notes that the pages were “Found rolled up and placed in one corner of the vault. Pressed out, arranged and bound this 8th day of March, 1880.”

“The State Constitution is one of the most significant markers in Oregon’s legacy,” explains Herkert, “and it needed repair in order to be preserved for future generations.”  The volume’s leather binding was worn and abraded, especially along the spine edges, and leather was missing at the corners. The inner hinges of the binding were broken and pages were detached, including the volume’s title page.  Many of the pages were dirty and torn, and some had been mended with a variety of damaging tapes and adhesives over the years.

The Oregon State Archives launched a crowdfunding campaign, managed through a custom donation portal on the Archives website, and donations included such incentives as a commemorative lapel pin or a personally signed thank-you note from Richardson. 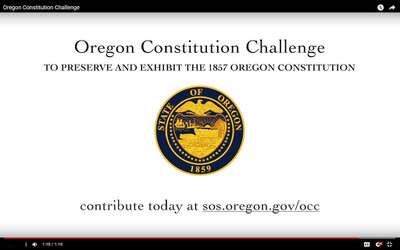 The Archives created a video which was a “call to action for all Oregonians, young or old, to become engaged in preserving the legacy of the state’s history.” View the video HERE.  It was a big hit!

Secretary Richardson became the project’s #1 advocate. He kicked off the fundraising effort by greeting visitors to the State Capitol rotunda while holding the original state Constitution for them to view – wearing white gloves of course. “Be part of history. Contribute whatever you can,” Richardson told people wherever he traveled. “It can be a dollar – it can be as much as you can afford.”  He stressed the need to make sure that the Constitution was safely preserved and stored.

The local and state newspapers and media picked up the “Dimes for the Constitution” story, and promoted the Archives’ promise that the first school to raise $250 would get a private visit with the volume. They published another story when the Lamb Elementary School in Salem, OR was the first to reach that goal.

A lot of people asked, “Why didn’t the State Archives just go to the legislature for the funds?” Herkert said that she had thought about it, but felt strongly that the Constitution is the people’s document, and they should have the opportunity to engage in civic involvement and pride.

“We took in dollars – we took in coins. We appreciated every cent!” Herkert says that they received donations from 50 cents to $15 to $20,000. In one family alone, each member gave $10,000.  The State Archives had released the call to action on February 14, the state’s birthday, and in less than six months had raised $103,000, which included the original $7,000 from the student coin drive.

The Oregon Constitution Travels to Massachusetts

The State Archives chose to have the conservation treatment and digital imaging performed at NEDCC in Andover, Massachusetts, because of the Center’s experience in working with historic materials such as the Massachusetts Archives’ founding documents, the Bradford Manuscript, and other highly significant state and government records.

Secretary of State Richardson arranged special clearance through the TSA checkpoints and Ms. Herkert hand-carried the Oregon Constitution on a flight from Portland to Boston. “I didn’t want a lot of fanfare,” she explains, “so a TSA agent met me at the airport doors and walked with me to the check-in.” He quietly walked the volume through while she passed through the metal detectors along with the other passengers, and he made sure to stand in a place where she could see him at all times. “During take-off and landing I wrapped the strap of the bag around my foot,” she laughs. “It was a little unnerving!”

At NEDCC, Mary Patrick Bogan, Director of Book Conservation, evaluated the condition of the volume. Testing of media and adhesive solubility was necessary to determine efficacy and safeness of treatment. She and Herkert discussed treatment options at length to decide on the most appropriate approach considering the object’s condition and future use. After thorough examination of the volume, a step-by-step treatment plan was developed and sent to Herkert for final approval.

Following review and collation, and before treatment, the Constitution was imaged in the Center’s Digital Imaging Studios to record the appearance of the pages prior to conservation.  The text block was then carefully removed from the binding, dis-bound into individual leaves, and the pages were gently cleaned to removed surface dirt where possible, using a soft brush overall and then a soft 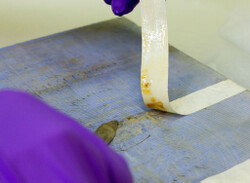 sponge eraser on the blank areas of the pages. After careful testing of the inks, the pages were washed in filtered water where possible.

Conservation of the text pages was complex. Entries and signatures on the pages had been written in a variety of inks, and over the years, a variety of papers and adhesives had been used to mend tears in the document. The pages were immersed in ethanol and filtered water and when iron gall ink was present, treated with calcium phytate to stabilize these damaging inks. Previous repairs were removed and discolored adhesive stains reduced while in the bath.  After the aqueous treatment, the pages were mended with wheat starch paste and Japanese paper. 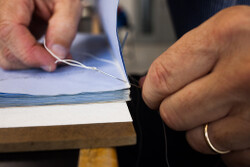 After washing and mending, the pages were digitized a second time to obtain the best image capture of the contents. The text block was then resewn and rebound into the stabilized nineteenth century binding. The damaging condition issues were addressed and the original elements of the artifact were preserved.

A custom cloth-covered drop-spine box was created to protect the volume during storage and travel.  Ms. Herkert flew back to Andover for the conserved volume’s return trip, again with special airport clearances and low key, but reassuring, assistance from TSA agents.

The Oregon State Archives held their Public Unveiling of the State Constitution on November 6, 2017 at the State Archives in Salem. Relatives of the original signers were present including Jane Evans and her sister Anne Miller, descendants of Richard Miller, who represented Marion County at the Constitutional Convention.

Secretary of State Richardson and State Archivist Herkert hope that the project will speak to citizens of all ages, instilling an understanding and appreciation for how Oregon came to be.  “The freedoms that we have ... are the result of sacrifices pioneers made 160 years ago,” Richardson said. “This was the starting place at which Oregon was established.”

LEARN MORE about the Oregon State Archives and the State's Constitution.

Conservation and Digitization of the Oregon State Constitution 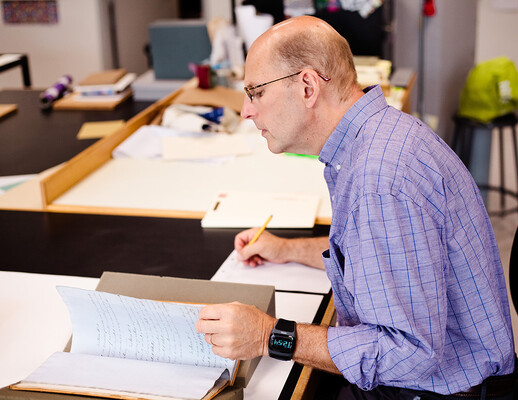 The conservator reviews the conservation plan and examines the volume before beginning treatment, and collates to record the order of the pages. 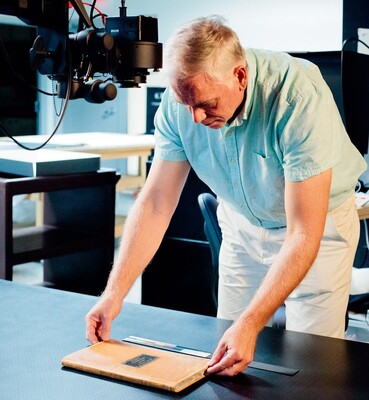 Following review and collation, and before treatment, the Constitution is imaged in one of NEDCC’s Digital Imaging Studios to record the look of the volume as accurately as possible. 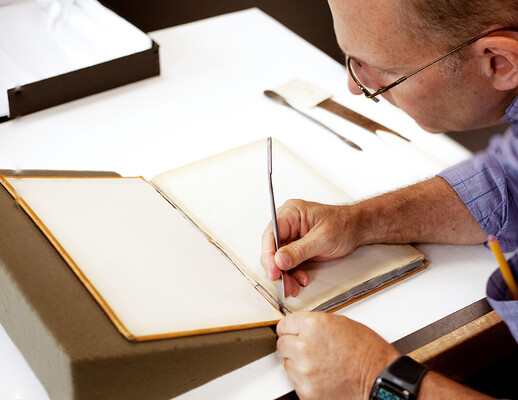 Using a sharp tool and without damaging the binding, the conservator separates the text block from the binding so that pages can be treated. 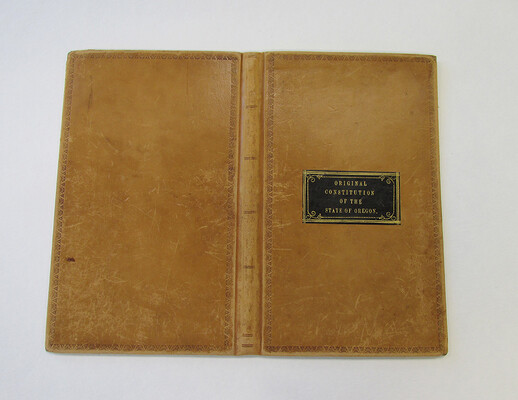 The binding after being separated from the text block showing the intact spine. 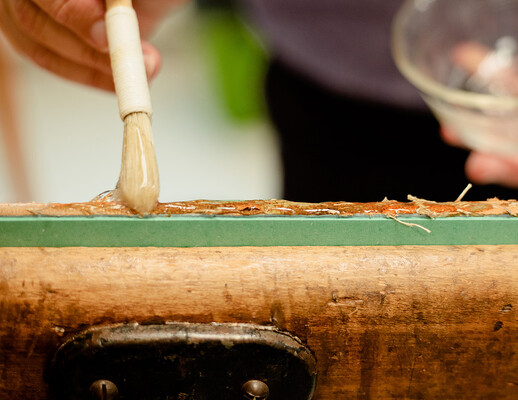 Old discolored adhesive is removed from the spine edge using a poultice of methyl-cellulose. 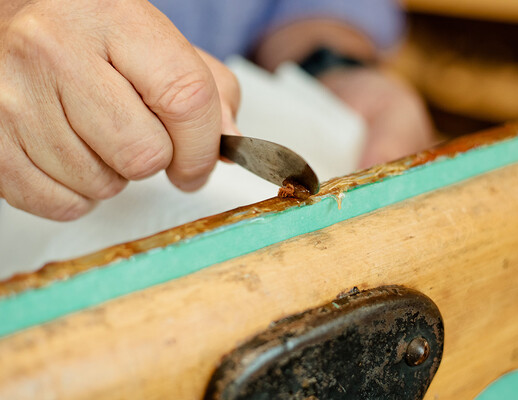 The methyl-cellulose softens the adhesive so that it can be safely removed. 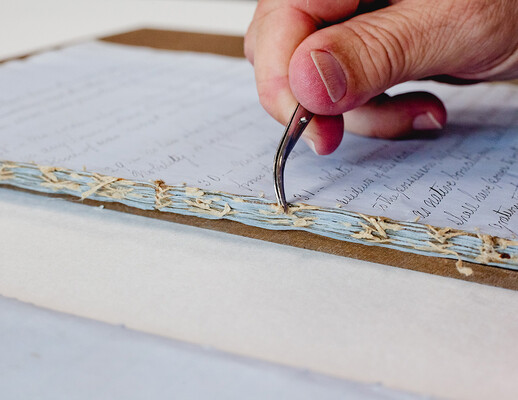 The pages of the volume were originally single sheets of paper that were sewn together with thread that stabbed through the pages near the spine edge. A tweezer is used to carefully pull the individual threads in order to not cause further damage to the paper. 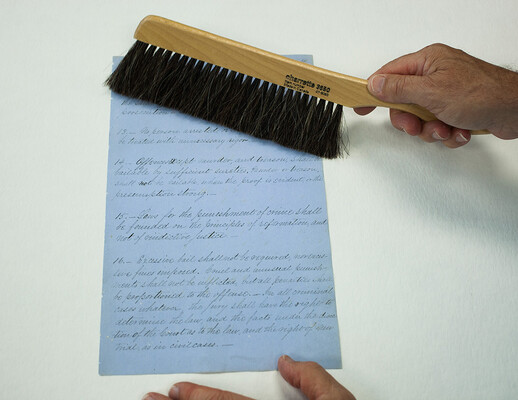 After the volume is dis-bound into individual leaves, the pages are gently cleaned to remove surface dirt. This is first done with a soft brush so as not to abrade the paper or writing. 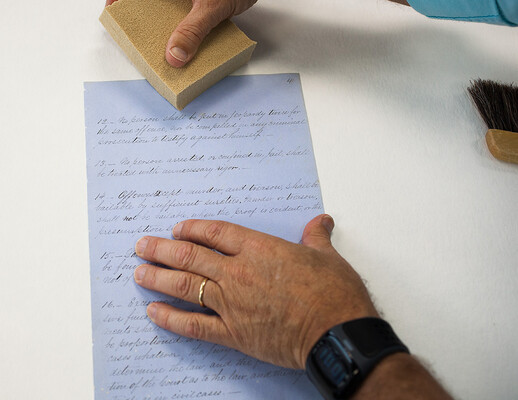 Only the margins and blank areas of the pages are then dry cleaned with a soft sponge eraser. The areas with manuscript writing are avoided. 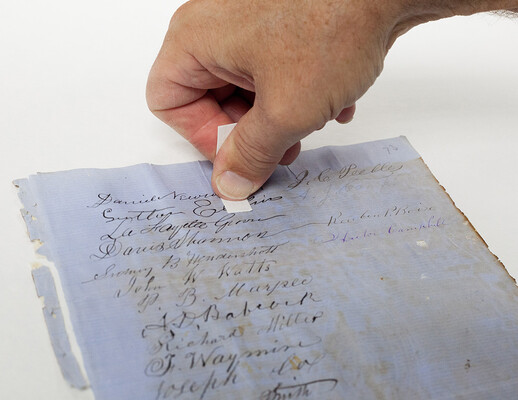 Testing of inks is performed to verify that they will not be soluble during aqueous treatment. The majority of the Constitution was written using one ink, but signatures on the signatory pages were written in a variety of inks and each are individually tested for solubility. 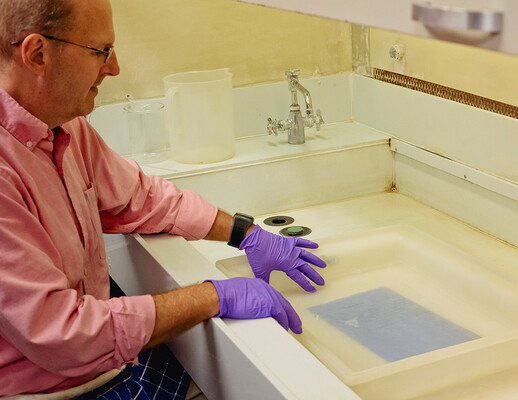 The pages are placed in a bath of ethanol and filtered water to wash the pages and prepare them for calcium phytate treatment. 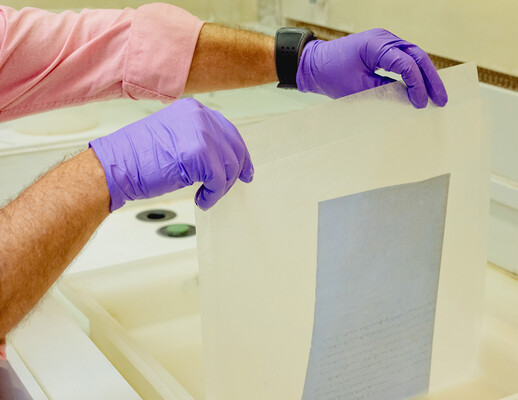 Each leaf is supported while in the bath and when moving them out of the bath. This protects the paper while it is wet and limits the need to touch the paper directly. 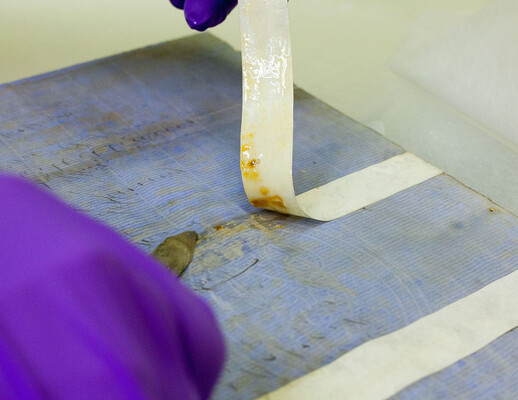 The previous paper repairs and discolored adhesives were removed in the bath. 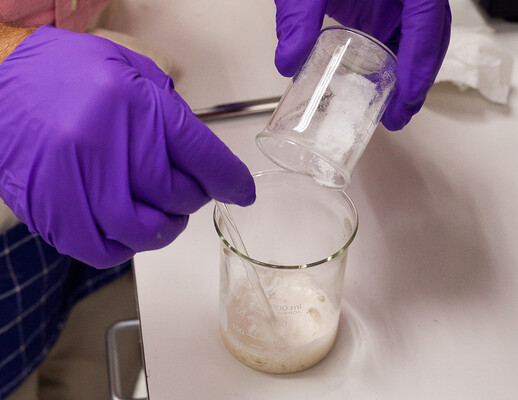 The manuscript was written using iron gall ink which releases free iron ions as it ages. These ions can accelerate the deterioration of the cellulose that makes up the paper.  To stabilize the free iron ions, pages are immersed in a calcium phytate solution. The solution is made by mixing with de-mineralised water. 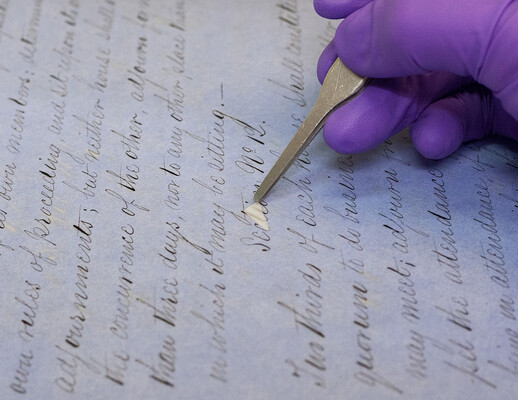 Pre-conditioned strips of blotter are used to test the iron gall ink for free iron ions both before and during treatment. 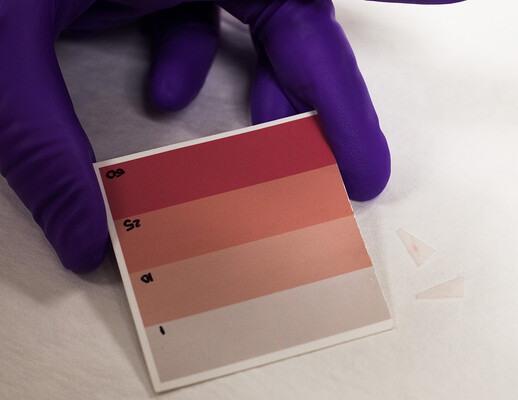 The darker the pink color on the test strips, the more deteriorated the iron gall ink. The pages were washed in the calcium phytate treatment until no pink showed on the testing strips. 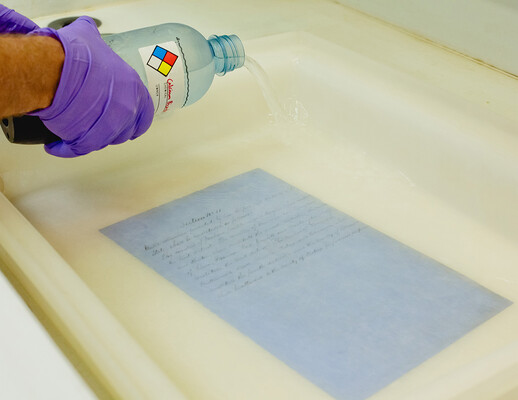 The pages are then immersed in a calcium bicarbonate solution to neutralize any acid left in the paper and leave an alkaline buffer to protect against the formation of acid in the future. 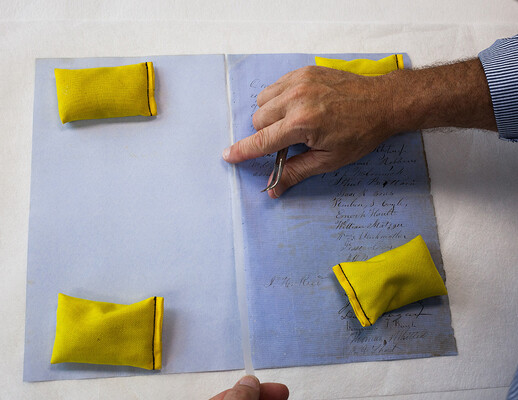 Leaves of the Constitution are held in place using soft weights and the Japanese paper is applied to the spine edges to connect the two sheets. 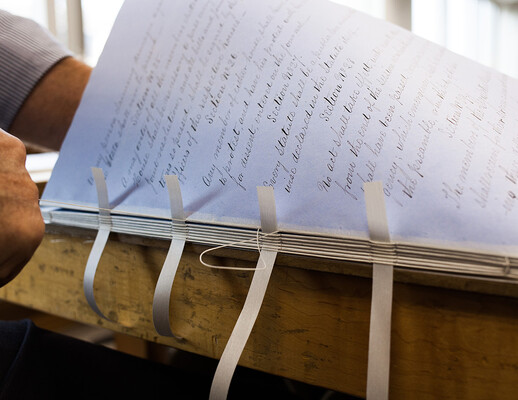 The volume had been over-sewn originally, but signatures are now sewn through the new spine folds using unbleached linen sewing thread. This sewing method will allow the pages to open more easily and safely. 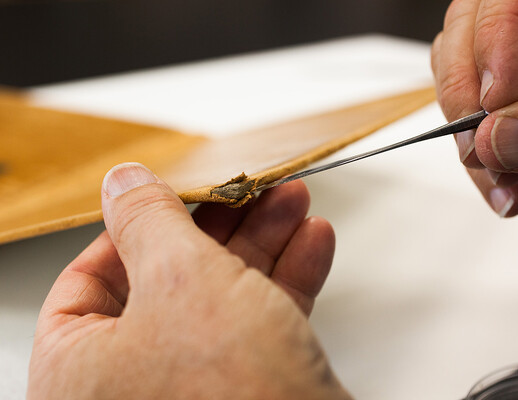 Attention is now turned to the binding. Breaks and splits are repaired and the spine is prepared for reattachment of the text block. Worn corners of the binding are consolidated with adhesive. 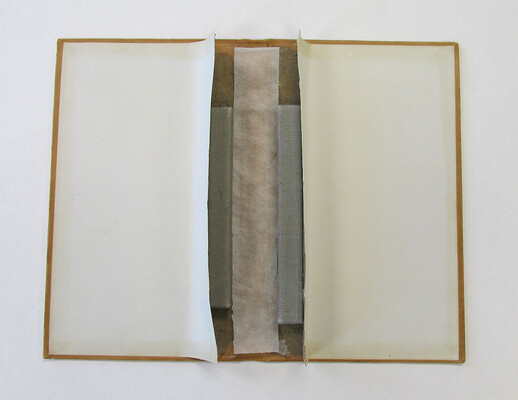 The repaired and strengthened binding is ready to be reattached to the text block. 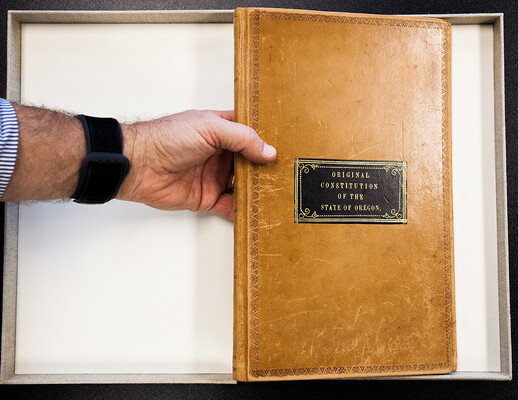 A custom-fitted drop-spine box was constructed to protect the Constitution during storage, allowing the volume to be placed into the box or removed without any rubbing or wear to the binding. 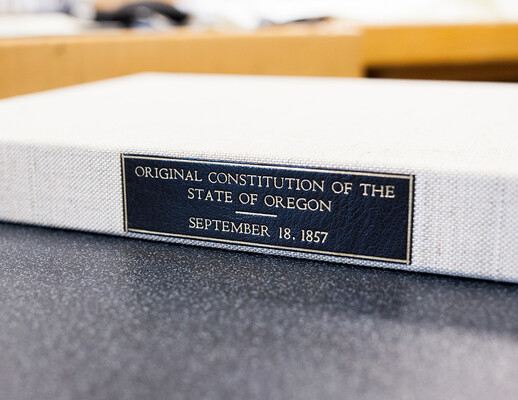 A label is made for the custom cloth-covered drop-spine box. 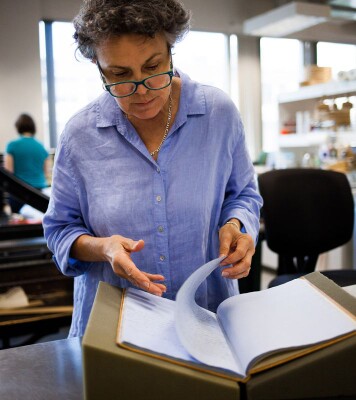 A final review of the conserved Constitution is performed by Mary Bogan, Director of Book Conservation. 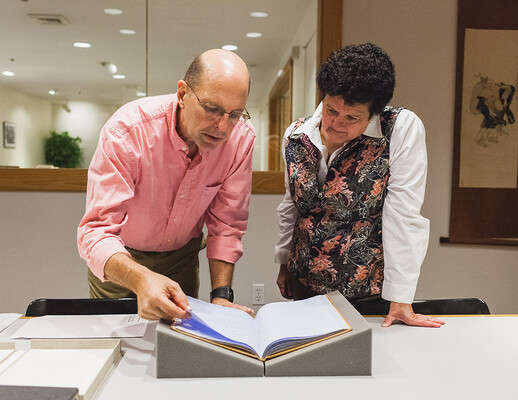 Article: The 1857 Constitution is on display at the State Capitol