NEDCC hosted a six-day, hands-on workshop on the Construction of Japanese Hanging Scrolls at the Center’s Paper Conservation Laboratory.  This was the second in a series of workshops on Japanese tools and mounting techniques that followed the Karabari Workshop held in 2017. The workshops were presented in partnership with the Foundation for Advancement in Conservation (FAIC), which supports conservation education, research, and outreach activities that increase understanding of our global cultural heritage.

The days were long and packed with activity right through the weekend. Participants learned about the aesthetics of scroll mounting, proportions for the silk brocades, and approaches to lining their sample works and attachment of border brocades. Scroll assembly techniques were presented, including the proper attachment of the roller bars and knobs, the futai, and hanging and wrapping cords. Attendees learned traditional techniques of paper cutting, folding, and use of traditional hand tools. A scroll box was provided for each participant.

"The workshop was invaluable, as I now have in-depth knowledge regarding the construction of typical Japanese hanging scrolls. This not only gives me a greater aesthetic appreciation for the objects, but also helps to inform treatment, exhibition, and storage decisions. This course will serve as the foundation for future instruction on the remedial treatment of Japanese scrolls. I plan on presenting the information gained from this workshop to my conservation colleagues."

"Just before I left my Studio to attend the workshop at NEDCC I was requested to treat a Japanese painting suffering flood damage. Although I have often received Asian artworks requiring preventive conservation this particular artwork suffered loss of the silk border.  I previously had made a Karibari at the workshop held at NEDCC a few years ago, however I required further instruction. The instruction by Yoshi Nishio and the making of the Japanese Scroll has provided me with the necessary information. Working under Yoshi’s instruction, Michael Lee’s direction and along side the conservators attending the event was a wonderful, rewarding experience." 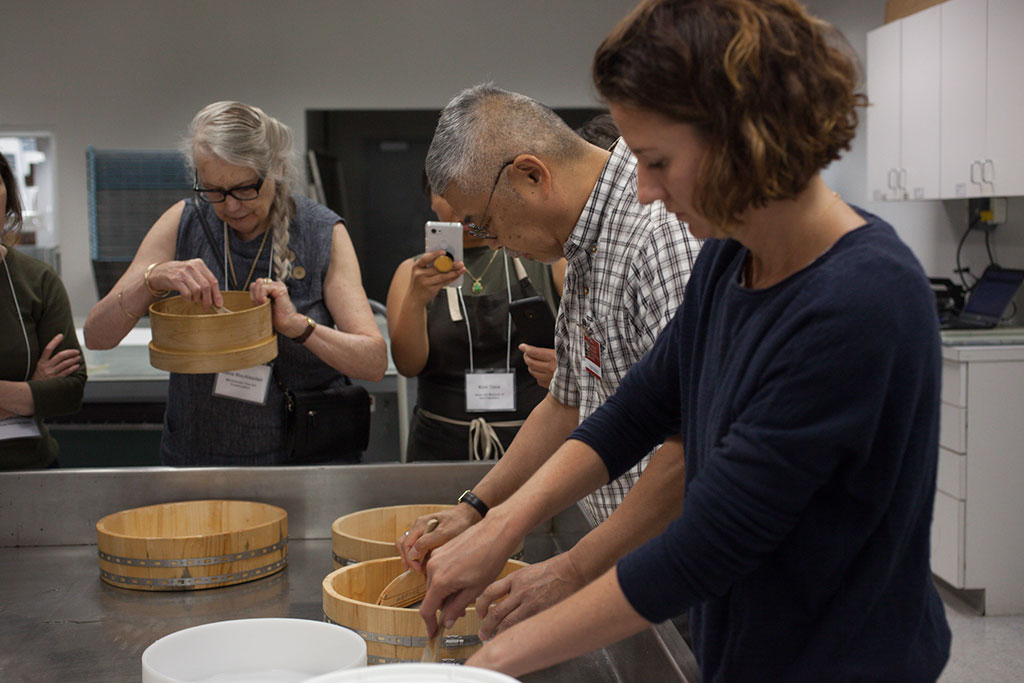 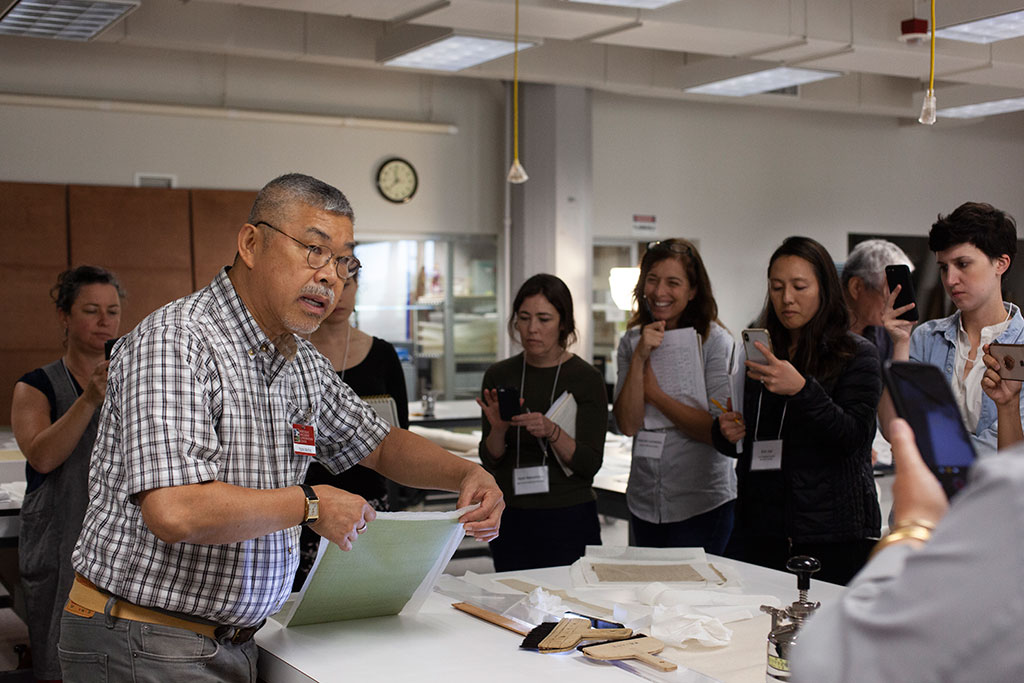 The silk brocades are prepared for lining prior to mounting. 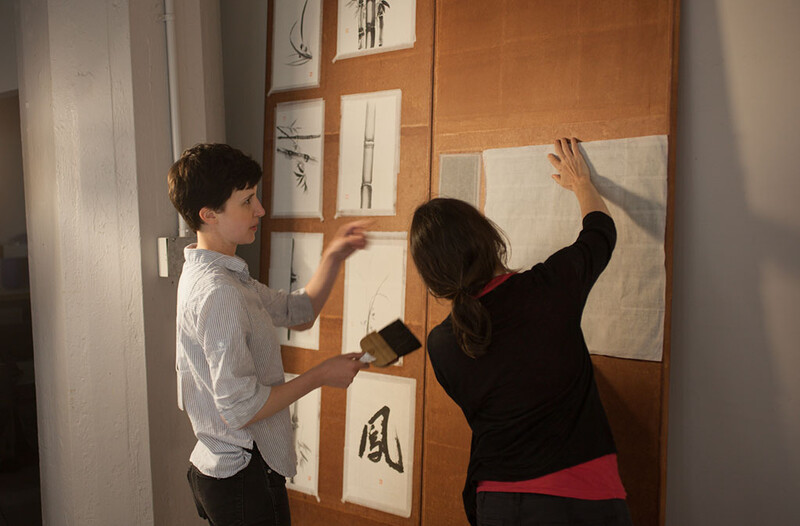 Christina Taylor and Heidi Nakashima prepare to stretch dry their lined brocades on the “karibari” panel. 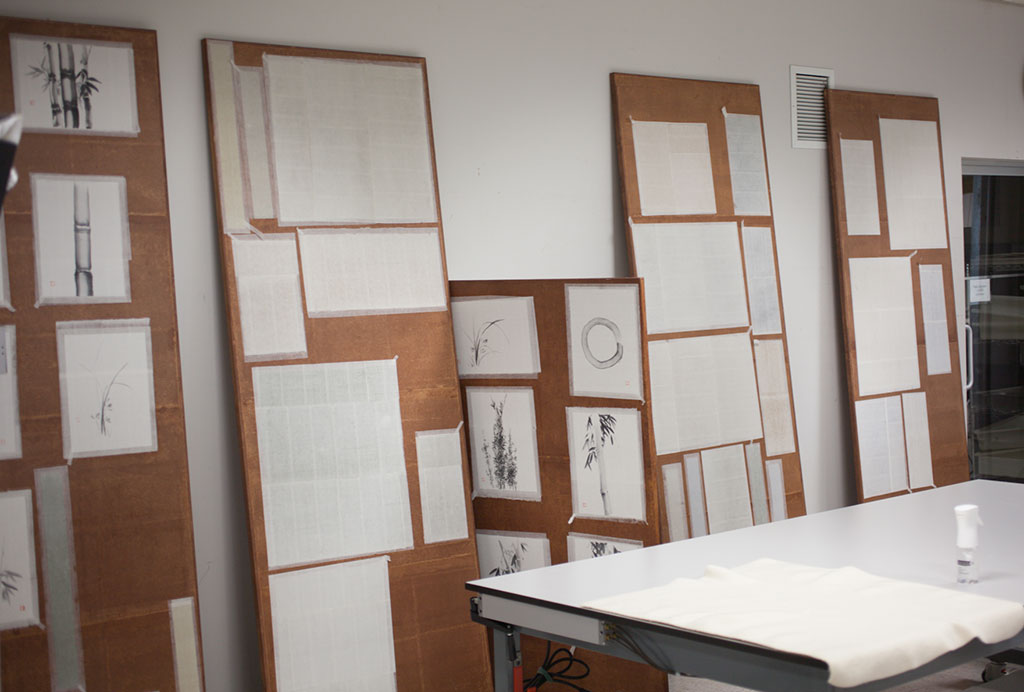 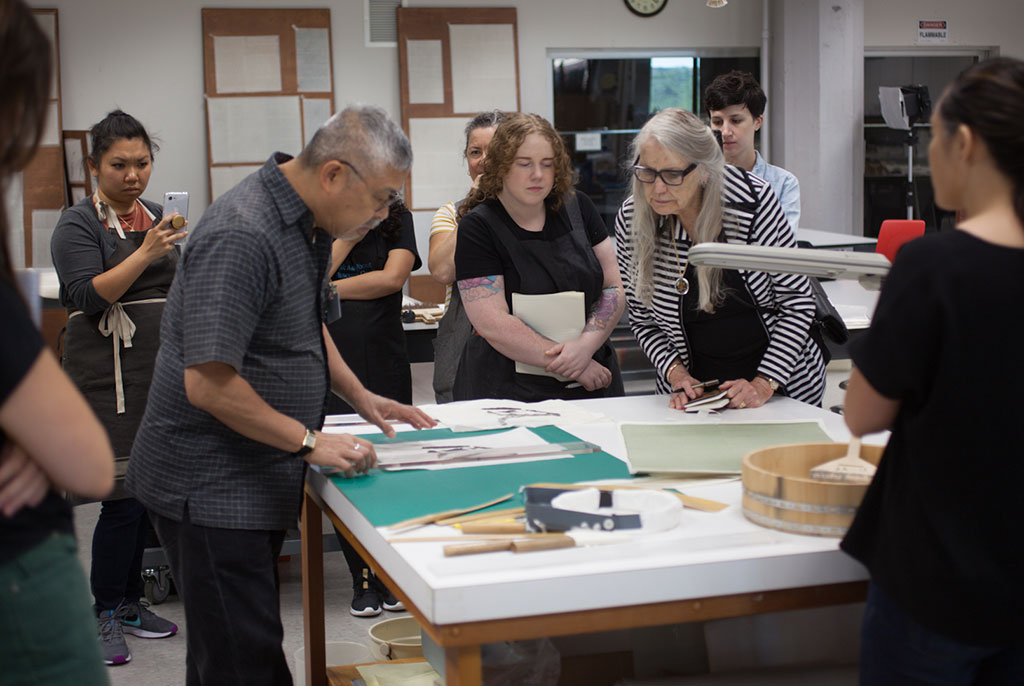 Mr. Nishio determines the appropriate dimensions of the silk brocades for his painting as attendees look on. 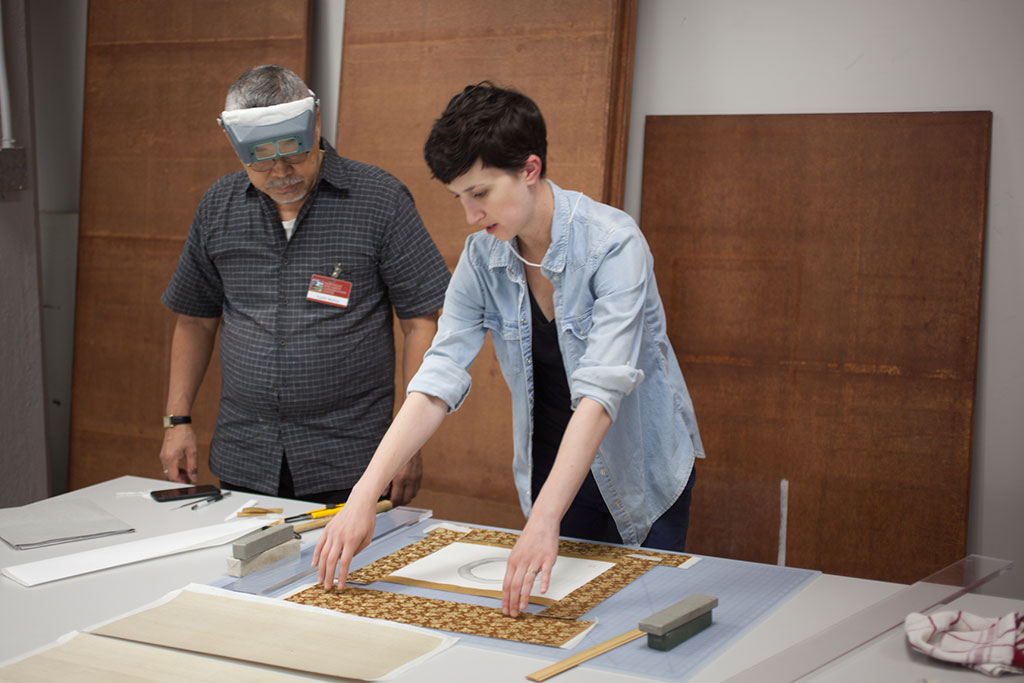 Christina Taylor consults with Mr. Nishio as she determines the size and position of each brocade segment. 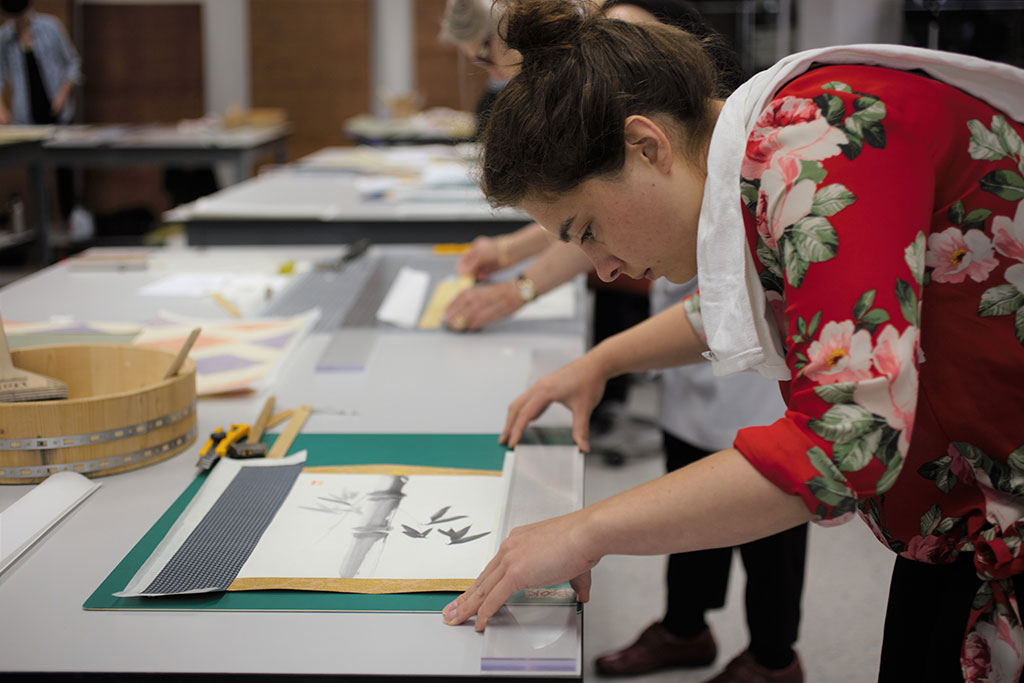 Brook Prestowitz aligns her brocades in preparation for attachment. 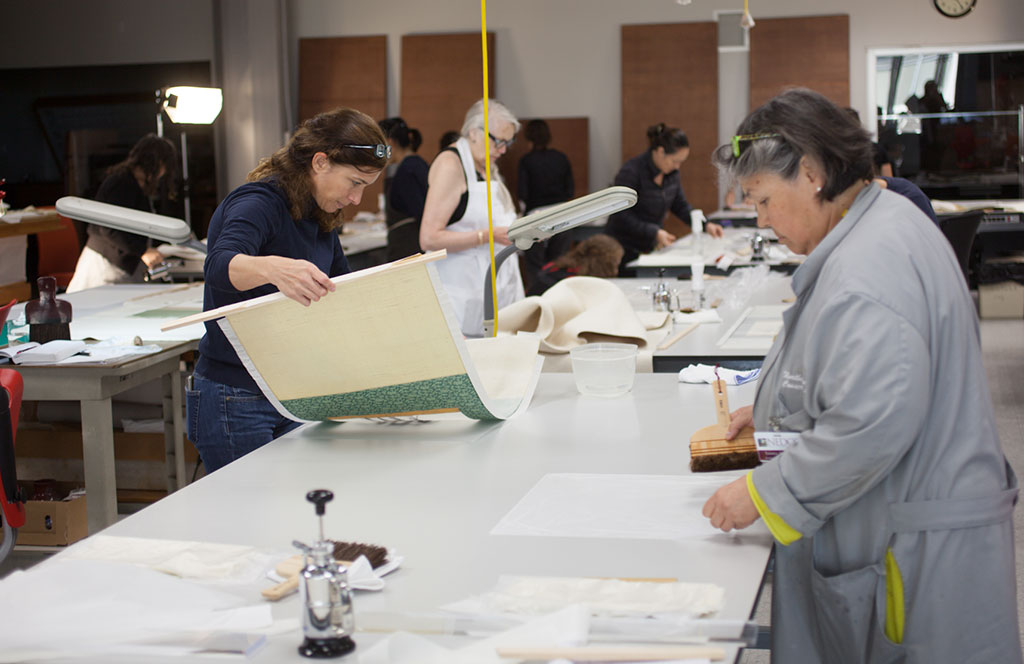 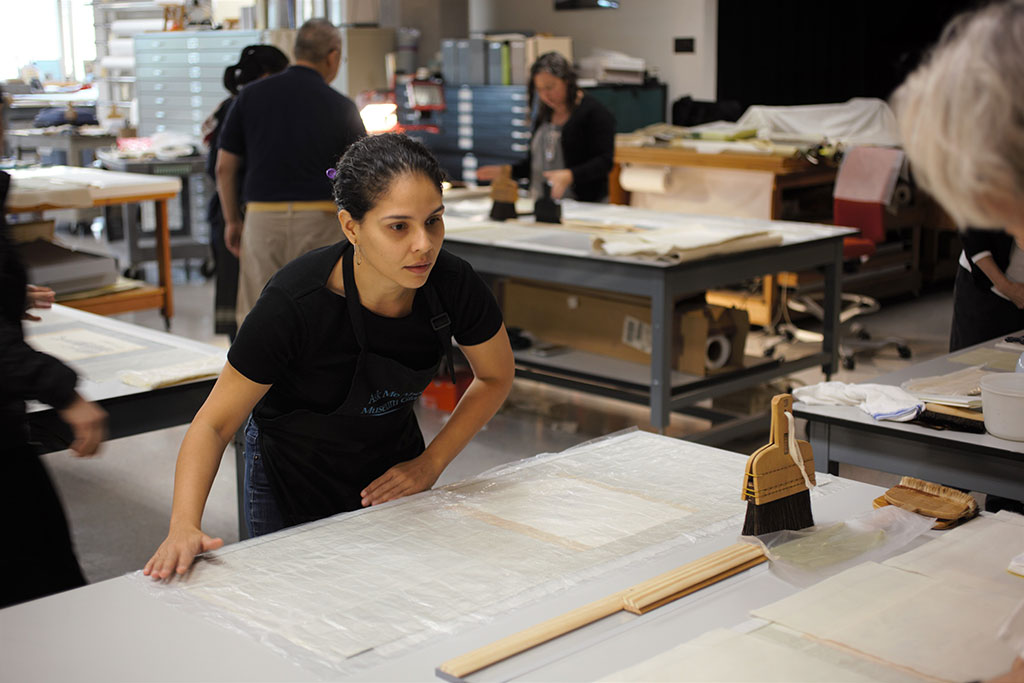 Maria Cristina Rivera Ramos completes the humidification of her scroll prior to receiving the “sou-ura” or final lining. 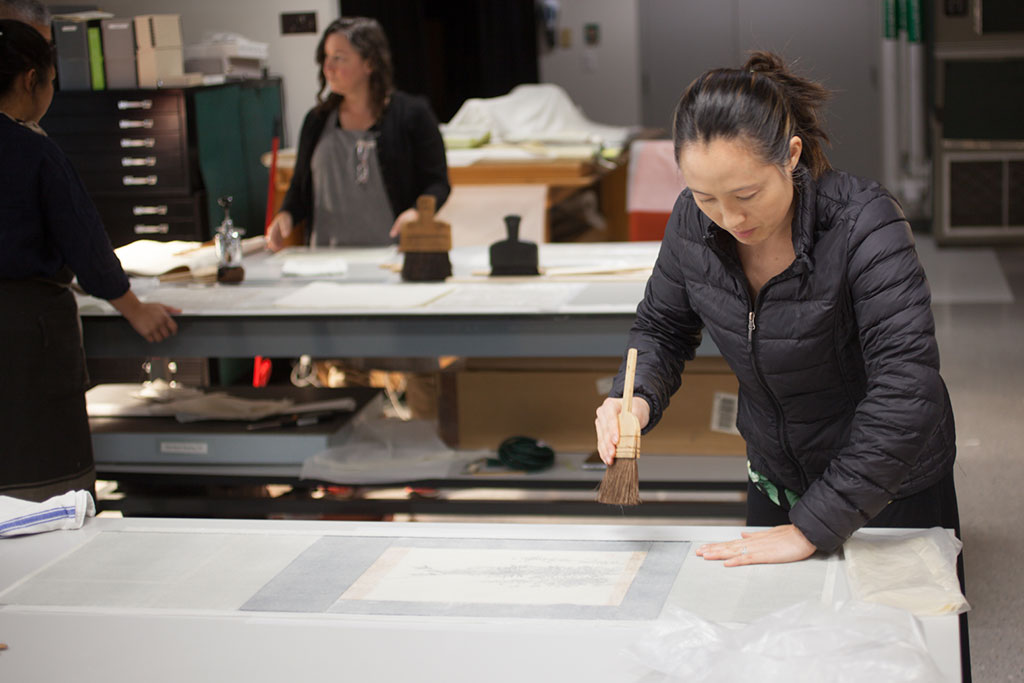 Erin Jue applies the “nade-bake” (smoothing brush) to flatten and smooth out her painting. 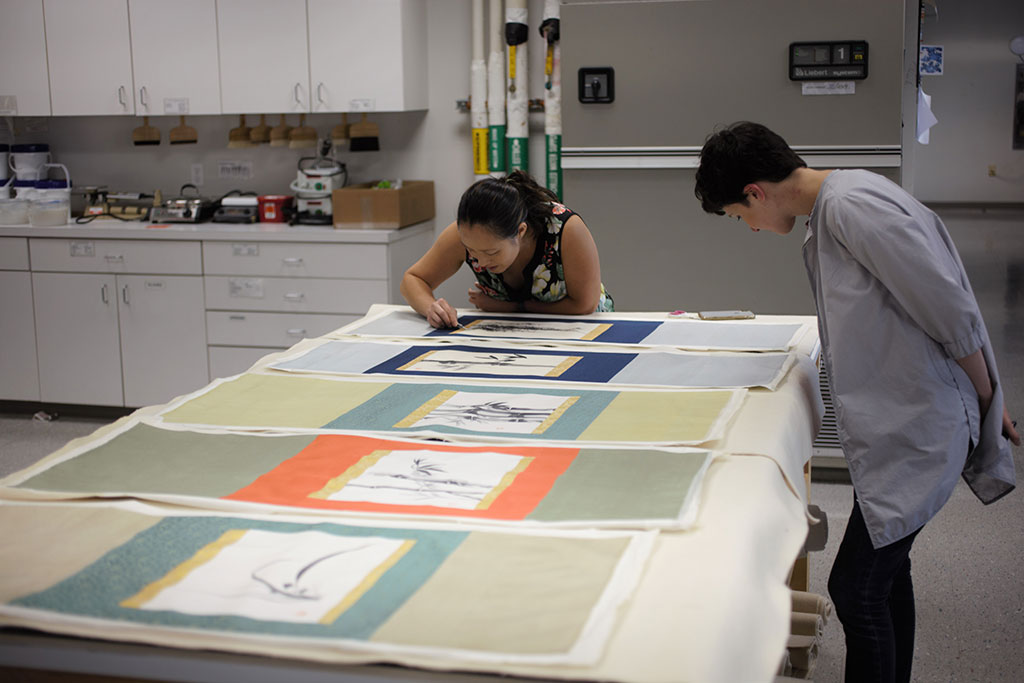 Five scroll paintings have been lined and are at rest before being stretch dried on the “karibari” panel. 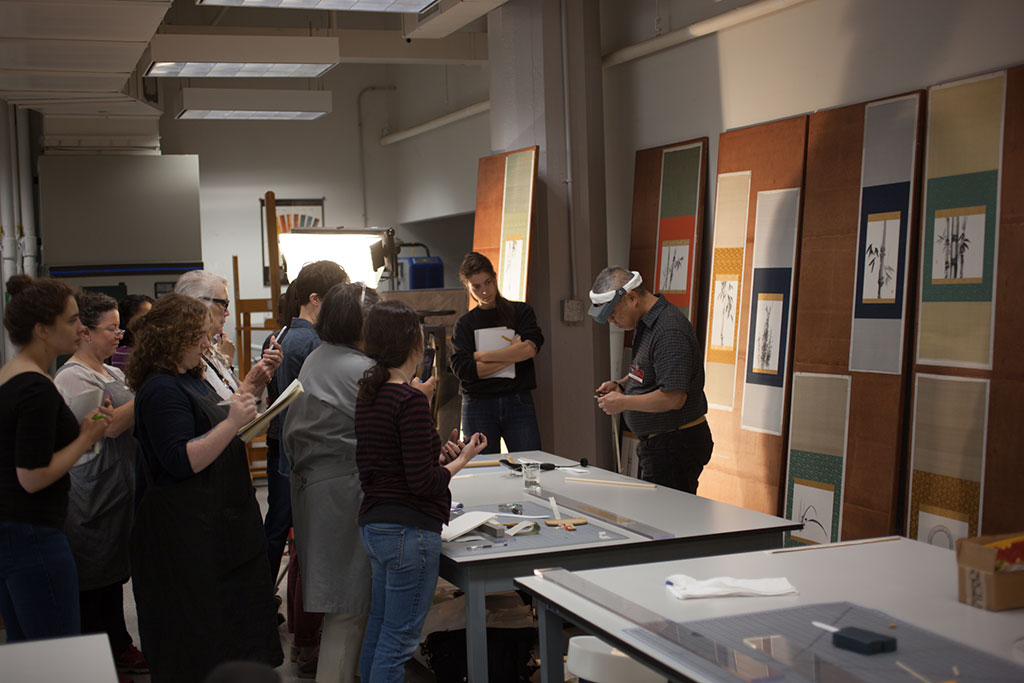 Mr. Nishio demonstrates the construction and placement of the “futai” while standing in front of the “kakejiku” as they dry. 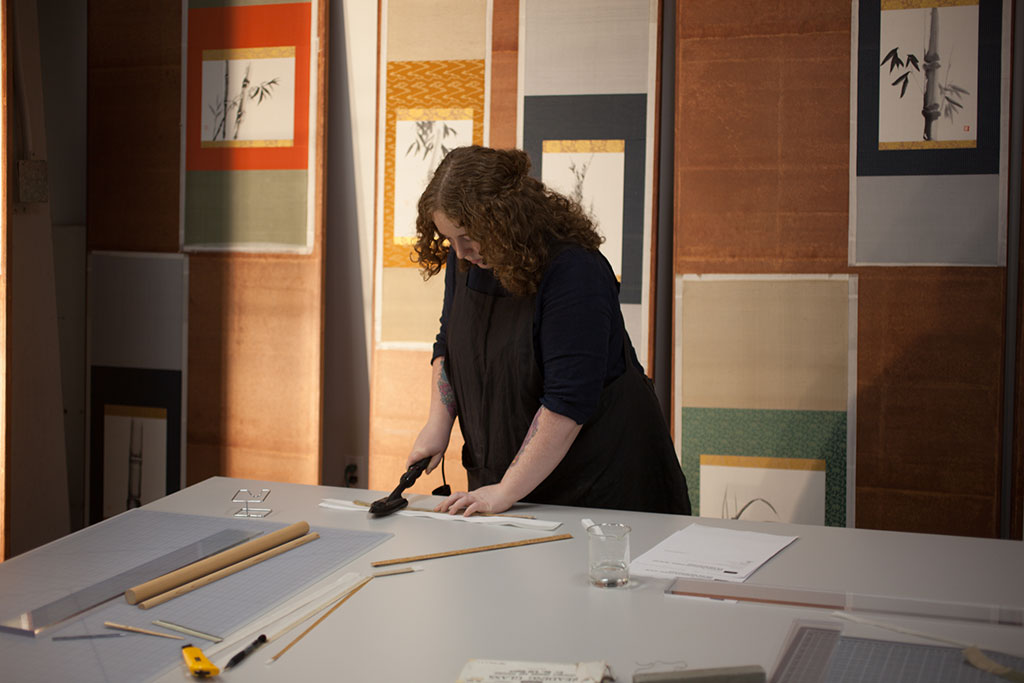 Mhairi Boyle irons the silk “futai” to crease the fold in the silk fabric. 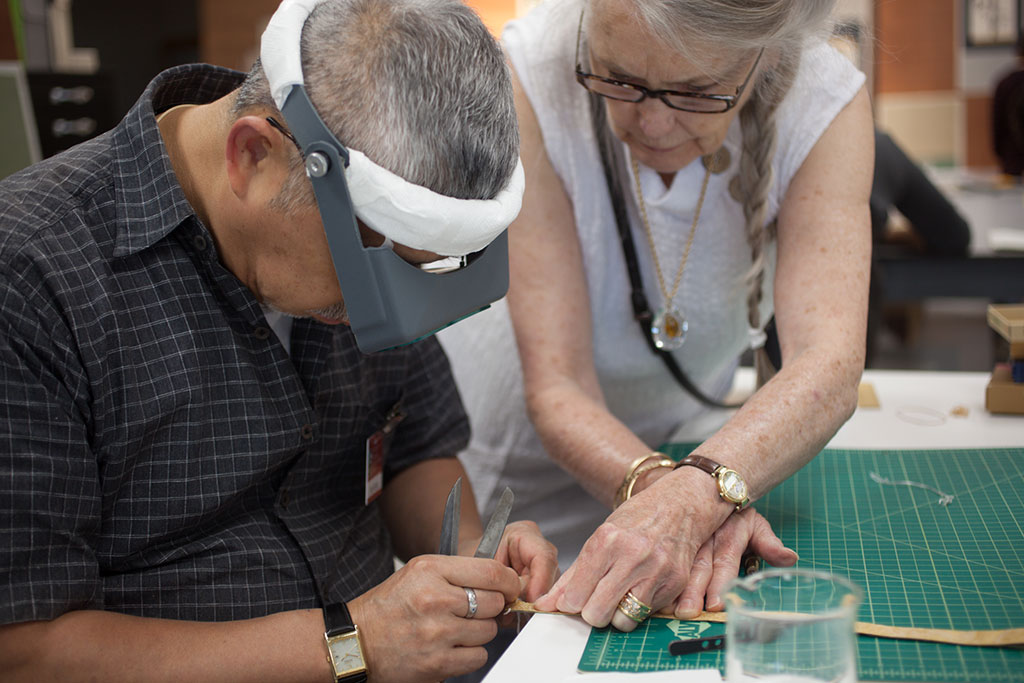 Mr. Nishio demonstrates how to sew the ends of the “futai” and apply the “tsuyu” (decorative tassels). 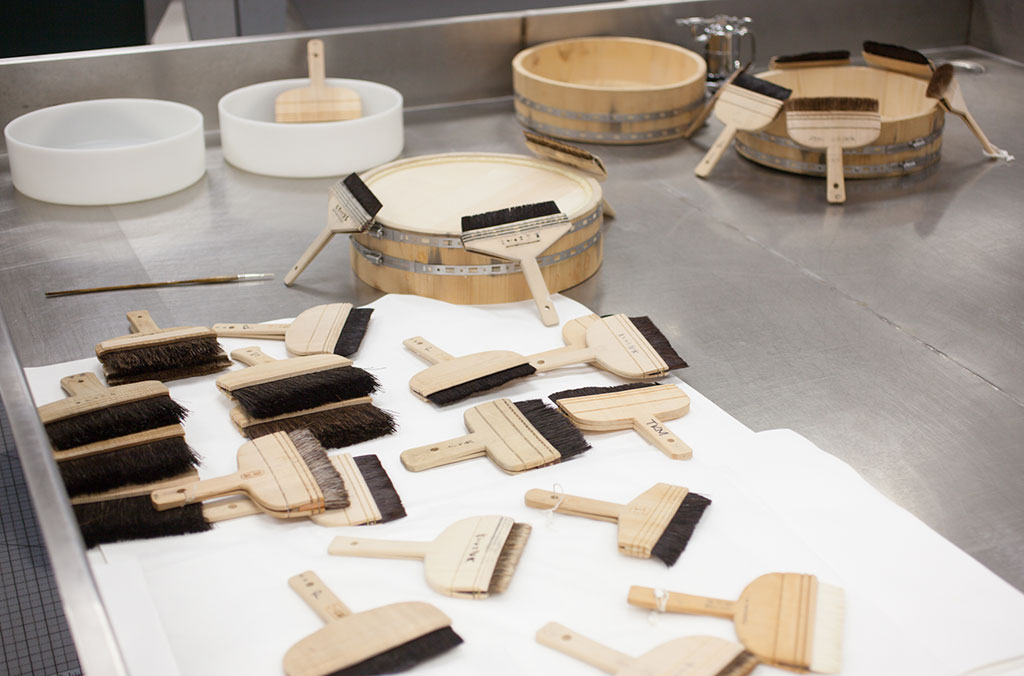 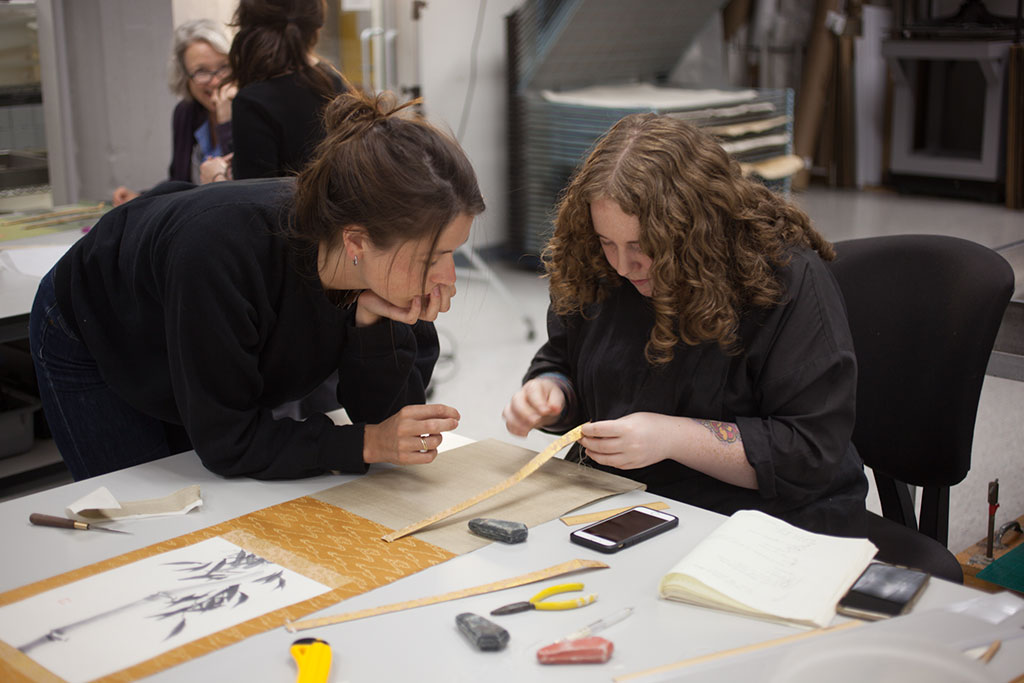 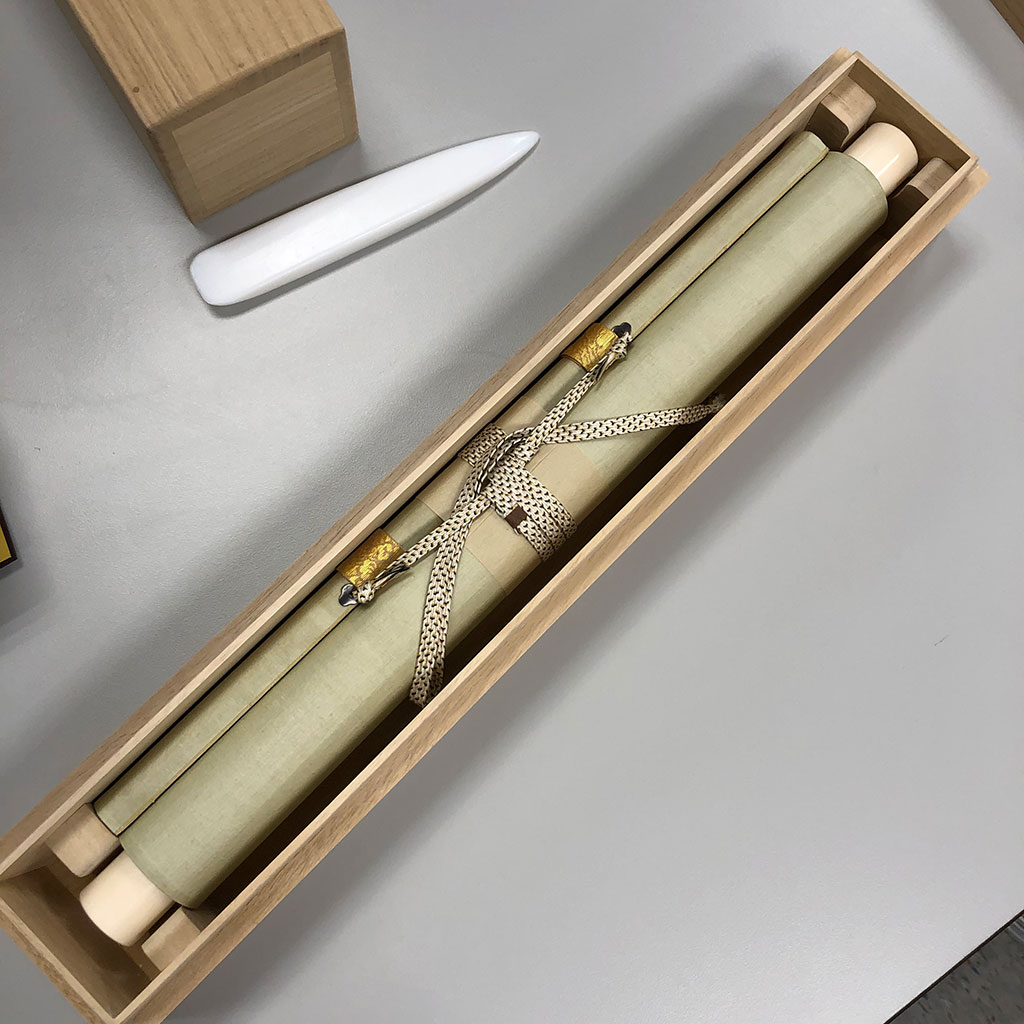 One of fifteen completed scrolls formally presented in its scroll box. The “jikubako” or scroll box is traditionally made from paulownia wood. 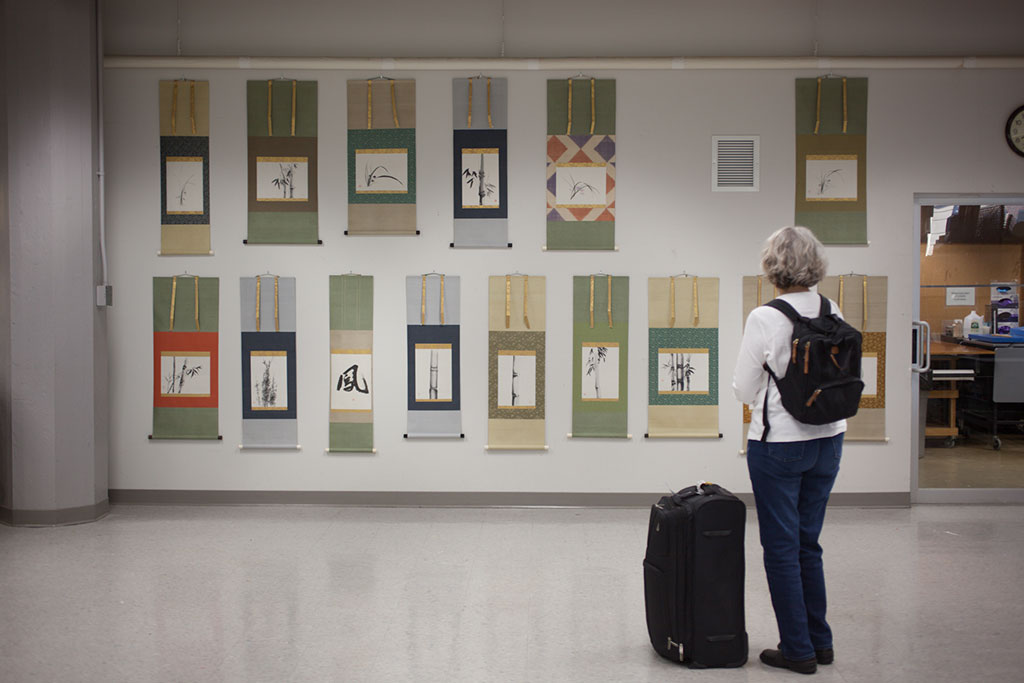 Our parting photo displaying all of the scrolls designed and created during the 2019 scroll workshop at NEDCC. 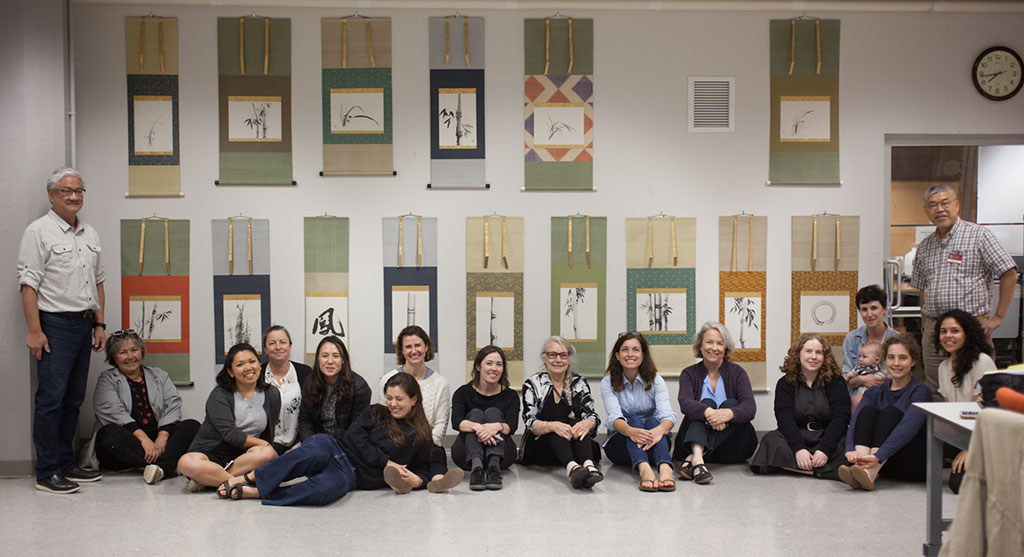 NEDCC works with the Nishio Conservation Studio (NCS) to offer the highest level of quality care and professional conservation treatment of Japanese and Chinese art. Traditional techniques and craftsmanship are combined with modern scientific analysis and conservation procedures to merge Asian aesthetics with Western technology while conforming to the ethics and standards of practice of the American Institute for Conservation (AIC).