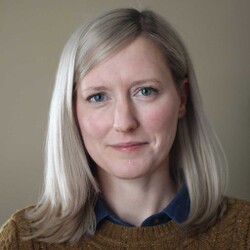 As Director of NEDCC’s expanding Audio Preservation department, Bryce Roe confers with NEDCC’s clients to evaluate their collections and develop audio preservation proposals using traditional technologies for magnetic and digital tape media, and either traditional or optical-scanning methods for grooved media.  She earned an MLIS in Archives Management from Simmons College, and a Bachelor of Arts with a concentration in Ethnomusicology from Oberlin College in Oberlin, OH.

Bryce has presented on audiovisual topics at conferences including the Association of Moving Image Archivists (AMIA) and the Digital Public Library of America’s DPLA Fest.  Bryce is a member of the Society of American Archivists Audio Visual Archives Roundtable, the New England Archivists Moving Image and Recorded Sound Roundtable, and was the founder of the AMIA Student Chapter at Simmons College. 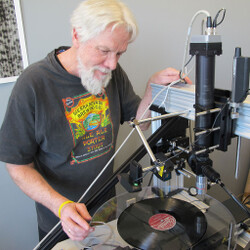 Frank Cunningham has worked in the field of audio recording for over 30 years. He has broad experience in both designing and operating systems and software for live performance, broadcasting, and recording.

A graduate of MIT, Frank has held audio production positions at WGBH in Boston and the Constellation Center in Cambridge, MA, and has extensive design engineering experience with a variety of companies in New England. He has engineered live and studio recordings for classical music groups such as the Boston Landmark Orchestra, the Pro Arte Chamber Orchestra, and the Cantata Singers, and worked on film soundtracks for WGBH Television productions including Vietnam: A Television History. 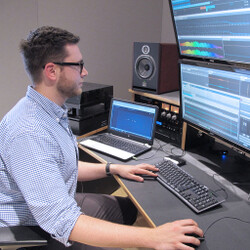 Karl Fleck has worked in the field of audio engineering since 2011 and has extensive knowledge of audio mastering and recording techniques in both analog and digital formats. He has held positions in a variety of recording studios and performance venues in New York City, Boston, and throughout Michigan. Over the years, Karl has worked with a variety of clients from many styles of music including Greensky Bluegrass, Birdsong at Morning, and the Grand Rapids Symphony Orchestra. At NEDCC, Karl’s passion for historical audio is central to his work. He is responsible for performing fully-attended transfers of obsolete magnetic audio tape, and assisting with traditional and optical-scanning methods for reformatting grooved media formats.

Karl earned a Bachelor of Arts in Recording Arts from Hope College in Holland, Michigan. In 2016, he earned a Masters of Music in Sound Recording Technology from the University of Massachusetts, Lowell.  He is an active instructor, author, and musician, primarily enjoying the mandolin. Additionally, he is a member of the Audio Engineering Society (AES), having presented his research, “Audio Mastering: An Investigation and Analysis of Contemporary Techniques” in May of 2016. 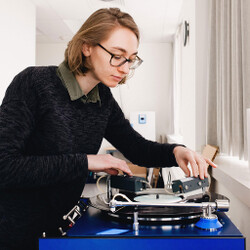 Julia Hawkins joined NEDCC in 2019 as an Audio Preservation Intern, a position funded by a grant from the Andrew W. Mellon Foundation. She is responsible for utilizing the IRENE technology to digitally reformat carriers such as lacquer discs, uncoated aluminum discs, wax cylinders, and other obsolete formats (e.g., tin foils, Dictabelts, etc.).

Julia earned a Master’s in Library Information Science, with a concentration in archives, from the University of Wisconsin-Milwaukee in Milwaukee, WI. Her experience includes serving as Project Archivist for the Franco-American Collections, Saint Anselm College, Manchester, NH, and Special Project Assistant at the Diamond Library at the University of NH, Durham, NH. 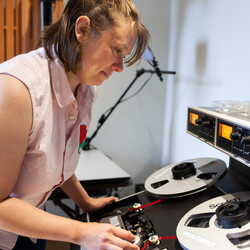 Hannah Rose Baker joined NEDCC in 2022 as an Audio Preservation Engineer. She is responsible for performing fully-attended transfers of obsolete magnetic audio tape and grooved media.