To help you understand how IRENE turns photographic images of an audio carrier's grooves into sound, we'll walk you through the process using a lacquer disc as an example.

IRENE reformatting begins like any other reformatting project. When we receive your recordings, we’ll inventory them, and index them if necessary. If cleaning is part of the project, all of the recordings will be cleaned before any are transferred. 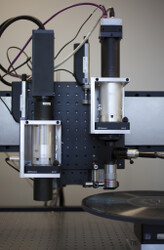 Unlike traditional digital cameras, both of IRENE’s are line-scan cameras. This means that each exposure captures a single line of information. As the disc or cylinder rotates, it virtually ‘unravels’ the spiral shape, producing long straight lines. 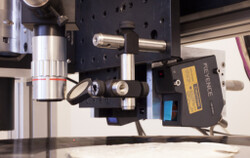 Even discs that aren’t visibly warped typically vary outside this range, so the camera moves up and down with the disc’s surface to stay in focus. 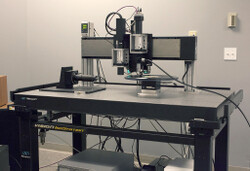 Similarly, at this scale, vibrations in the ground or air can interfere with the imaging. To prevent this, the entire assembly is mounted on top of a vibration-damping pneumatic air table.

Once the imaging step is completed, we are left with a visual data set that can be analyzed in custom software to extract the sound. The IRENE analysis softwares – ‘RENE’ for 2D data, and ‘PRISM’ for 3D data – have different features, but work on the same principle: a digital audio waveform can be derived mathematically by analyzing the contour of the physical analog groove.

A digital audio waveform is a representation of sequential values of amplitude, or loudness. Each of these values is ‘sampled’ from the image just as an analog-digital converter samples voltages created by the movement of a stylus during a mechanical transfer.

Because the analog grooves are represented in three dimensional objects, some signal processing, or analysis, must take place to ensure the best samples are chosen to create the most accurate representation of the sound.

This happens in two steps, 'tracking' and 'edge detection.'

This is IRENE’s view of a disc, before analysis begins. The lines appear to curve because they’re condensed vertically 100:1. 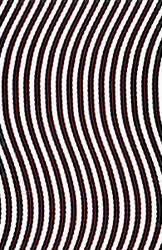 Analysis software ‘tracks’ the image by tracing the edges of the groove from bottom to top for each groove in the image. These large-scale ‘tracking’ lines become the ‘neutral’ position of the groove, setting the software up for the next step. (Click image to enlarge.) 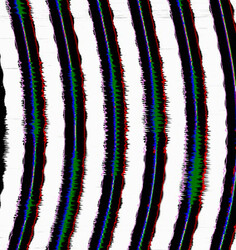 Once tracking is complete, the software analyzes the small-scale movement of the groove over time, in a process called ‘edge detection’. These lines, visualized here in blue and green, are mathematically transformed into the digital audio waveform.

One of IRENE’s strengths is its ability to work with recordings that other systems can’t.

Some older discs, such as shellac 78rpm records and glass-based lacquer instantaneous discs can break into pieces. IRENE can frequently still accommodate these discs, but even careful alignment of the pieces is not enough for the software to automatically track. In these cases, the IRENE operator can digitally reassemble the pieces and manually track the movement of the grooves in software. 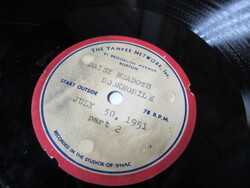 Lacquer instantaneous discs are not pressed, like vinyl LPs or shellac 78s, but cut directly, from a machine called a recording lathe. This property sometimes complicates our job by producing images without a discernable groove bottom.

The thin white line in the middle of the thick black line is the bottom of the groove.

In some lacquer discs, the groove bottom is not visible to the camera.

In these cases, we change the lighting from directly above the disc to above and to the side, revealing a consistent groove-bottom from which audio can be derived.

If side-lighting the disc still doesn’t reveal a useful groove bottom, audio can be derived from the tops of the groove walls, where the audio signal is present, but is more likely to have been affected by surface wear, resulting in a noisier transfer.

A note on cleaning:

Dirt in the grooves of carriers can decrease the signal quality of the digitized audio, even with IRENE.  Because there is no contact with the media, IRENE does not cause wear on the grooves through abrasion by plowing through dirt as a stylus would.  But, although IRENE’s imaging approach causes no physical harm, it cannot see through excessive dirt.

Therefore, in some instances, we may recommend cleaning your carriers prior to imaging to achieve a superior signal quality.  Due to the fragile nature of the media, however, cleaning is not without risk; it can cause irreversible damage and/or accelerate the degradation process of the media itself.

Consequently, as an added precaution for particularly important or rare media, we can image the discs before and after the cleaning treatment, if desired. For more information, see Cleaning Lacquer Discs. 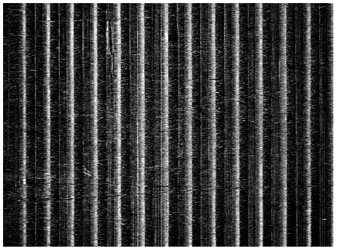 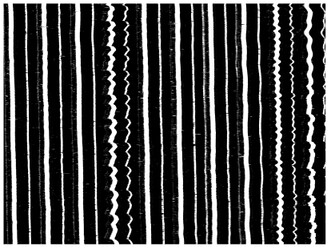