Discs, also commonly referred to as records, have a long history spanning from the late 1800s with the introduction of Berliner discs to the present with the ongoing manufacturing of vinyl records. While the form has essentially stayed the same over time, there have been several variations in material composition and construction, method of recording, and recording specifications. For simplification, this text will focus on the three types of discs that you are most likely to encounter in collections: shellac, instantaneous, and vinyl. 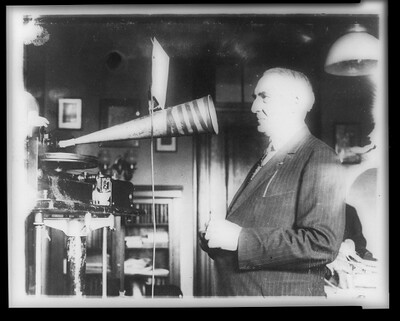 Shellac discs were used in the earliest days of recording. Discs were originally recorded using an acoustic-mechanical method. Think here of the pictures you have undoubtedly seen of a group of musicians or a speaker in front of a horn.

The acoustic energy was captured by the horn which would move a diaphragm at the small end of the horn, attached to a cutter that would cut into the disc. This disc would then be replicated for commercial distribution; these discs were referred to as shellac. In the mid-1920s, the creation of the microphone led to the recording of discs using an electro-mechanical recording method, converting electrons to mechanical energy used to cut into the disc. It was also about this time that the industry involved in the creation of these discs standardized playback speed at around 78 RPM. Prior to this, speed varied quite a bit. Shellac discs are identifiable by their uniform thickness throughout the disc, their rigidness, and a matte finish when compared to vinyl and lacquer. The most common diameters are 10” and 12”. Although the distinction is made between acoustic-mechanically recorded and electro-mechanically recorded discs, this has little bearing on how these discs are stored and handled and despite the variance in recording method, they will share a common reproduction method.

In the 1930s, instantaneous discs were introduced, fulfilling the need to create a recording that could immediately be played back. They did not require a replication process and they were not intended for distribution. This spawned a plethora of documentary recordings, capturing everything from ethnomusicological field recordings to home recordings, interviews, oral histories, off-air radio recordings, and more.

Vinyl discs were introduced in the late 1940s. Similar to shellac recordings, an original is recorded and then used to start an intricate process that results in the creation of copies for distribution. Compared to shellac and instantaneous discs, vinyl is flexible, thin, and lightweight. A vinyl disc’s surface is softer, making it more prone to scratches.

Cylinders date from the late 1870s with the invention of the phonograph, and were common through 1929 when production ended in favor of discs. The composition of cylinders varies greatly within this time period -- from tinfoil covered metal tubes to molded wax to celluloid (a type of plastic). The method of recording remained constant; however; cylinders, like early discs, were recorded using an acoustic-mechanical process. A standard cylinder is typically 2.25” in diameter and between 4” and 4.25” in length, but specialty sizes can range from 1.33” to 5” in diameter and 0.5” to 8” in length. Cylinders may or may not have a cardboard core.

Shellac discs have no significant degradation mechanisms under normal conditions and are a robust format in all regards except one. Their rigidity and composition make them prone to breakage through mishandling. Excessive pressure or dropping a shellac disc will almost certainly result in breakage.

Lacquer discs have multiple degradation mechanisms. Over time, the lacquer layer can undergo chemical and dimensional shifts that cause it to separate from the base glass or aluminum layer, leading to what is referred to as delamination.

Once delamination has occurred there is no way repair the damage; however, there are warning signs that can alert you in time to successfully transfer the signal on those discs about to suffer delamination. Early signs consist of a whitish film covering the disc, consisting primarily of palmitic acid. Palmitic acid is a chemical used in the creation of lacquer discs; this leaching out of the palmitic acid is a major contributor to delamination. At this stage, where the palmitic acid is leaching out, but the lacquer has not yet begun to crack, it may still be possible to have the disc cleaned by a professional and the signal transferred from the disc.

Lacquer discs are also fragile and rigid, making them prone to breakage. This is particularly true for glass-based lacquers.

Aluminum discs do not tend to have degradation mechanisms, but they do have one issue that can manifest through mishandling and improper storage. The grooves cut into aluminum discs can be shallow due to the way they were recorded. Combined with the softness of aluminum, significant pressure against the side of an aluminum disc can make the grooves shallower than when originally recorded. This diminishes the integrity of the original recording and sometimes may render it unplayable.

In general, cylinders are fragile and care should be taken not to drop or bump them. Prior to 1902, when more rigid wax formulas were introduced, cylinders were typically made from brown wax. Brown wax cylinders are extremely soft and fragile, are prone to surface scratching and groove wear, and are susceptible to fungal growth. Home recordings made on brown wax are especially high risk; users often shaved off layers of wax in order to reuse the cylinders, making these particular cylinders extremely thin and prone to breakage. Improper storage and handling of these softer wax cylinders may also result in a warping of the grooved surface, resulting in sound artifacts due to speed variations.

Presently, there are two different ways that the sound recorded on discs is reproduced. The traditional method consists of using a turntable, otherwise known as a record player, which utilizes an electro-mechanical method of reproduction. A stylus of the appropriate size and shape is selected according to the groove dimensions. Any movement that the stylus makes which is not part of the actual recorded signal adds noise and distortion to the audio reproduction. Given the miniscule movements involved in this process, even a small amount of particulate matter or a scratch can significantly impact the resulting sound. It is easy to see how delamination, breakage, or significant scratches may make it impossible to play a disc back.

The other method that is used for reproduction involves scanning, or imaging the groove. Once the image of the groove is captured, the mechanical variation is able to be identified and calculated. These calculated variations are then plugged into an algorithm that generates a digital audio file representing the originally recorded signal. This method is particularly useful when discs are damaged or degraded to the extent that a stylus would not be able to stay in the groove of a disc.

Reproduction via turntable and via imaging are significantly different, but the recorded signal in the original disc results in similar audio results when particulate matter, scratches and other things obscure the groove. Ultimately, careful storage and handling practices are important to the integrity of the content regardless of which reproduction method you choose.

Like discs, there are currently two playback mechanisms for cylinders: the traditional electro-mechanical method and the imaging method. First, a correctly sized mandrel must be chosen for playback; the diameter of the mandrel will correspond to the interior diameter of the cylinder. Then an appropriately sized and shaped stylus must be chosen based on the groove dimensions. As with discs, the movement of the stylus generates electrons and any additional movement caused by scratches or particulate matter will affect the sound.

Cylinders differ from most discs, however, in that their grooves are vertical as opposed to discs’ lateral grooves. The vertically oriented grooves create hill and dales which must be imaged using 3D technology in order to obtain the information necessary to generate a digital audio file representing the originally recorded signal.

2.4 Best Practices for Storage and Handling2