storage and handling of media collections

Poor quality storage enclosures can damage the emulsions and image materials of film-based collections, as well as accelerate chemical damage. Poor handling can also cause problems. As with paper-based collections, external factors such as high, low, or fluctuating temperature and humidity; light exposure; the presence of pollutants; and poor storage and handling exacerbate the deterioration of film and electronic media. Session 2: The Building and Environment will further address how to control environmental factors and mitigate the damage they cause.

An excellent resource on the storage and handling of still and motion picture film, glass plate negatives, magnetic tape, photographic paper prints, inkjet prints, CDs, and DVDs is the IPI Media Storage Quick Reference, available as a free download or for purchase with an interactive wheel that offers a medium-by-medium overview of preservation issues, recommendations, and guidance on storage environments.

Some collections may contain a variety of older sound recordings, including cylinders and discs. Like other media, they require careful handling and a stable moderate environment.

Cylinder recordings should be stored standing on end; all discs should be stored vertically (on edge). Take care that shelves are solid and can bear the weight of discs: LPs can weigh as much as 45 pounds per shelf foot, and 78 and acetate discs are even heavier. Since discs tend to put most of their weight along the center line of the shelf, special shelving may be required. It should have dividers that reach from top to bottom and front to back, spaced four to six inches apart, to guard against warping of discs. Storing discs of different sizes together may also cause warping and should be avoided.

Wash and thoroughly dry hands before handling records -- there is no need to wear gloves, and in fact, cotton gloves can cause you to drop the item. Do not touch the playing surface(s). Handle grooved discs by the edge and label area; hold your middle and index fingers in a "V" shape in the cylinder to provide proper support.

Cylinders and discs should be at 50-60°F, with 30-40% RH. In general, these early sound recordings are susceptible to high temperatures or humidity as well as thermal cycling (temperature fluctuation). Dust is extremely damaging to these mechanical sound recordings; particles of dust settle into the grooved recording, and upon playback, the stylus will drag the dust through the groove -- etching the walls of the groove and even imbedding the dust into the recording.

Motion picture films are most likely to be on either cellulose nitrate or acetate bases, though polyester bases were manufactured; this may depend on the source and date of your collections. It is extremely dangerous to retain original motion picture films on cellulose nitrate base, since they are highly flammable. For most small institutions, it is best to professionally reformat nitrate film and store it offsite in cold storage, or transfer it to an institution that is better equipped to care for them.

Like other enclosures, film containers should be chemically stable and should physically support the materials, fitting the film as closely as possible. Film containers should pass the Photographic Activity Test (PAT) to ensure that there is no damage from glues or additives contained in the enclosure.

Boxes or cans are acceptable for film storage; these may be made from acceptable plastics (polypropylene or polyethylene), preservation-quality cardboard, or noncorroding metal. Some storage containers are vented. At room temperature, this is an advantage for acetate films, allowing acetic acid vapors to disperse; at lower temperatures, venting does not make as much difference. Film containers should be stacked horizontally, with the film lying flat. In general, films should be stored with their tails out and rewound before projecting.

Be aware that the National Fire Protection Association (NFPA) has guidelines for the construction of cabinets and vaults that house nitrate motion picture film. Meeting these guidelines is complicated and expensive, and thus impractical for most small institutions -- but not meeting them can be dangerous. In addition, local law may require that you meet the NFPA guidelines. As noted above, offsite cold storage or transfer to another institution is often the best option.

Use extreme care when projecting old film, since projecting fragile film can cause additional damage. The film must first be inspected using special film-handling equipment. An inspection will identify edge codes that may provide clues to film base and dating, signs of mechanical damage (e.g., splices, broken sprocket holes, shrinkage), signs of chemical damage (e.g., vinegar odor), and/or signs of mold damage. See the Film Forever website and The Film Preservation Guide: The Basics for Libraries, Archives, and Museums for detailed descriptions of the inspection process and additional information on storage. If you cannot inspect film in-house or at a nearby institution equipped for film inspection, commercial companies can provide this service.

Temperature and relative humidity are the two key environmental factors for motion picture film collections. The chart below, from the Film Preservation Guide, Chapter 6: Storage is based on the IPI Media Storage Quick Reference. Motion picture film collections on acetate film bases stored at room temperature will last approximately 50 years before the onset of vinegar syndrome. 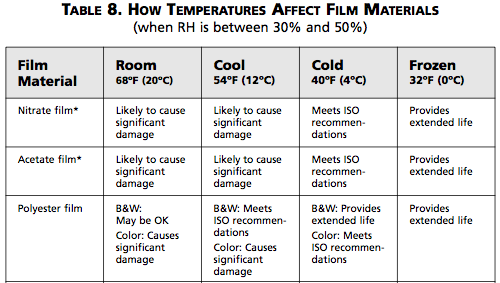 For all film bases (nitrate, acetate, and polyester), frozen temperatures with an
RH of 30-50% extends the useful life of film. A low-cost alternative to offisite
cold storage are off-the-shelf frost-free freezers or refrigerator, but careful
packaging is necessary to protect motion picture films from humidity. Read
more about this approach in Film Forever: Chapter 8 - Home Storage.

Store all tapes vertically (on edge), in preservation-quality boxes. Do not lay any recordings flat, not even audio cassettes or VHS tapes. For open-reel tapes, replace reels that have slotted hubs. Only reels with unslotted hubs should be used for storage. Tapes should be played completely through, then stored without rewinding (tails out). They should be rewound just before playback.

When playing tapes, make sure that you are familiar with the playback equipment and that the tape is properly inserted into the machine before playing. When opening tape containers, be aware of any odor that might indicate binder hydrolysis or vinegar syndrome; such tapes should not be played. The tape should also be examined for any irregularities in the tape pack (gaps or slips, where the tape pack is not flat) that need to be corrected before playback.

Tape demagnetization is not usually a serious problem, but nevertheless, keep magnetic tapes away from any objects containing magnets of any size. Do not operate any machines (like vacuums, computers, speakers, radios, or mobile phones) that might be a source of electromagnetic fields near areas where tapes are stored. See Jim Wheeler’s Videotape Preservation Handbook which is available through AMIA: https://amianet.org/wp-content/uploads/Resources-Guide-Video-Handbook-Wheeler-2002.pdf

Open reel audio and video tapes are the most subject to damage from handling as they are not protected by a cartridge. Dirt, dust, and fingerprints can damage magnetic audiovisual media, and dropping a tape can cause shock, or the disorientation of magnetic particles on the tape (and thereby, loss of information).

Tapes should be stored at a temperature less than 70°F (preferably around 45°F) with relative humidity levels between 20-30%.

Optical media includes CDs, DVDs, Blu-ray Discs and more, in all of their various read-only (-ROM), write once (-R) and re-writeable (-RW) formats. An excellent overview of the care and handling issues for CDs and DVDs is the 2003 CLIR publication Care and Handling of CDs and DVDs: A Guide for Librarians and Archivists.

For the long term, discs should be stored upright (vertically) in individual storage containers -- either in "jewel" cases or in tyvek envelopes. It has been suggested that for long-term storage, label inserts/booklets should be removed and attached to the outside of the case; theoretically, the paper might attract and hold moisture in a humid climate.

Always press down the inner hub and hold only the outer edges of the disc when removing it from the case, and be sure to return the disc to the case immediately when you are finished with it.

Never write or mark in the data area of a disc. Do not write on discs with a pen, pencil, fine-tip marker, or a marker containing solvents, as this may damage the data. Only a non-solvent-based felt-tip permanent marker should be used. The Electronic Media Group (EMG), a specialty group of the American Institute for Conservation, has developed an Optical Media Pen for marking optical media. Do not use adhesive labels or try to remove or reposition existing labels.

Cool to cold storage (41°F to 68°F) is the optimal temperature for optical media with relative humidity levels between 30-50%. Freezing is not recommended due to concerns about media stability and layer separation.

Exposure to light greatly accelerates the fading of the dyes used in -R (write once) optical media. Pollutants can cause corrosion to the metallic reflective surface.

Due to their vulnerability, short life span, and the inevitability of software and hardware obsolescence, most computer media formats - especially temporary and portable storage media such as disks, diskettes, flash memory cards, and USB drives - are not suitable for long-term storage of data. Data stored on computer media should be migrated to managed data options (digital repositories) immediately.

Most computer media have a write-protection switch that can be set to allow only "read" activities, protecting the data from being overwritten. Handle computer media by the edges with clean, dry hands; when handling SD Cards or other media with exposed contacts, avoid those contact areas. Avoid applying labels to computer media directly; instead, label the container.

As is the case with other film formats, microforms (roll microfilm and microfiche) may be on a nitrate (very early microfilms), acetate (1930s through 1970s), or polyester base (mid-1970s and onward).

General storage recommendations for microforms are similar to those for motion picture film. All enclosures should pass the Photographic Activity Test (PAT) to determine whether they contain damaging chemicals or additives. Paper or plastic enclosures are acceptable. Paper enclosures should be lignin-free and buffered or neutral; safe plastics are polyester, polyethylene, and polypropylene (not PVC or vinyl).

Microfilm reels should be boxed individually, with the film held in position by a preservation-quality paper tag fastened with a string and button tie. Do not secure the reels with rubber bands, which contain residual sulphur and deteriorate over time. Master negatives of microfilm should be stored in a preservation-quality box in an offsite storage area with a controlled climate. Microfilm should be stored in steel filing cabinets specially-designed for this purpose, but, if the film must be stored on shelves, inert plastic containers can be used.

Microfiche should be sleeved individually with the emulsion side away from the interior enclosure edges; this prevents abrasion and damage from adhesives. Store microfiche enclosures in steel cabinets, and ensure that the enclosures fit into the drawers without buckling. Use pH-neutral drawer dividers to keep microfiche from curling, and compress the fiche as little as possible in the drawer. Design your filing system to minimize handling of the materials.

Handling procedures for microfilms are identical to other film-based formats: since oils and dirt from fingerprints can damage the film, wear non-vinyl (latex, nitrile, or even cotton) gloves to handle microfilm. Hold microfilm along its edge or film leader, and take care to refrain from winding rolled microfilm too tight on its reel as this can cause abrasions.

In general, the environmental requirements for microfilms resemble those of other photographic materials. Year-round relative humidity lower than 50% is recommended for all film types. An upper limit of 40% is recommended for silver-gelatin films to minimize the likelihood of microscopic blemishes from silver oxidation (sometimes called "measles"). Temperature should not exceed 70°F; cooler temperatures are preferable.