The IRENE Lab reached the 100th cylinder from the Helen Hartness Flanders collection at Middlebury College Special Collections this week.

One of the key goals of the grant project is to develop workflow protocols, estimating models, proposal templates, and deliverable specifications, so it has been great to have this large (and fascinating!) collection of cylinders to use in the pilot phase.

The 100th cylinder in the Flanders collection is a recording of Mabel Wilson Tatro of Springfield, VT, made in appx. 1930, singing "Two Little Kittens."

LEARN MORE about how Helen Hartness Flanders  was able to collect the unique collection of New England folksongs and tales:

"In 1931 the collection of songs based on the previous year's efforts of Helen Flanders and George Brown, sponsored by the Vermont Commission, was published by the Stephen Daye Press. This volume, Vermont Folk-Songs and Ballads, included both texts and musical transcriptions of songs, although many of the transcriptions were based not on dictaphone recordings, but on songs taken down in musical notation by Brown during his early weeks of collecting in southern Vermont. 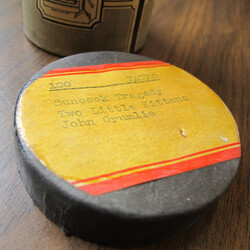 Flanders was responsible for notes and the general organization of the materials, while Brown, Elizabeth Flanders Ballard (Flanders' daughter) and George Brown’s mother, Alice Brown did the musical transcription.

During the summer and early fall of 1930, Alice Brown also did some field collecting. Her contributions to the archive are found in early publications. Some of the songs Alice Brown notated by hand from the singing of Mrs. George Tatro in July 1930, Flanders recorded on dictaphone in November of that year." - from the "Index to the Field Recordings in the Flanders Ballad Collection at Middlebury College, Middlebury, Vermont."

VIEW AN EXAMPLE of the handwritten notations by Helen Hartness Flanders and others as they documented song lyrics. (Courtesy of Middlebury College Special Collections) 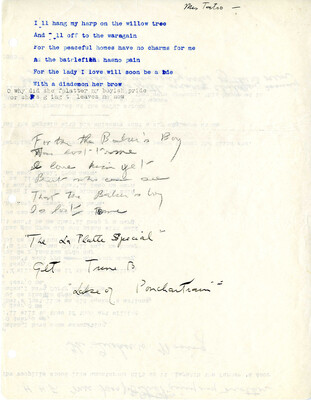