The NEDCC IRENE Lab has been working on more interesting recordings from the Carnegie Hall Archives collection, while continuing to fine-tune the 2D imaging capabilities in the Center's IRENE system.

Today’s audio clip is part four of an instantaneous lacquer disc recording of the CBS Symphony Orchestra, with Robert Shaw conducting Paul Hindemith's “When Lilacs Last in the Dooryard Bloom'd,” recorded June 30, 1946 for radio broadcast.  Robert Shaw commissioned the work from Hindemith.  It is the complete text of Walt Whitman's poem which Hindemith set to music for chorus, soloists and orchestra.  The world premiere of the piece had taken place just a few weeks earlier on May 14, 1946 at City Center with Shaw conducting the Collegiate Chorale. 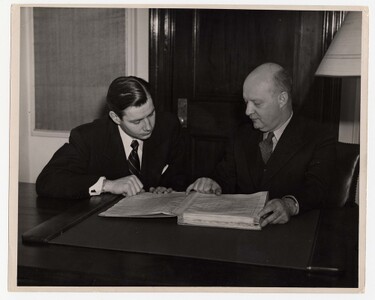 Yale University kindly loaned the Carnegie Hall Archives this photo of Robert Shaw and Paul Hindemith with the original score of "When Lilacs Last in the Dooryard Bloom'd," taken in 1946.

A Note on Fidelity - The IRENE system is designed to safely photograph the grooves on the media, so it “sees” the grooves made during the recording, as well as any scratches, dust, or other degradation of the material. Variabilities between formats, and even between recording equipment within a format, present further challenges. As part of the grant project, the IRENE Lab has been fine-tuning their process to get the best possible sound out of the variety of formats and conditions they are sure to encounter when NEDCC's IRENE service becomes available to cultural institutions across the US.

About the Carnegie Hall Recording Company 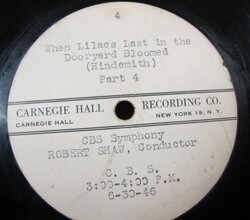 official agreement with Carnegie Hall nor did Carnegie Hall receive payment for the recordings and to date nothing in writing has been located explaining in full the company or its relationship to Carnegie Hall.  The Carnegie Hall Recording Company studio at Carnegie Hall existed from the 1930s until 1960.