A Visit from Edison 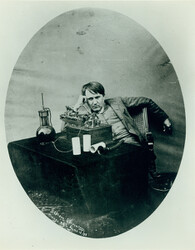 But the most distinguished visitors to the lab that day were some of the earliest examples of recorded sound.  Jerry brought a few of the Edison Park’s most historically significant recordings to NEDCC to be transferred using NEDCC’s IRENE optical approach.

Three of these cylinders were made by the technical staff of the Edison Laboratory during the first year that the Edison Perfected Phonograph was in use.  Each was cut on a yellow paraffin blank – an early type of solid-wax cylinder not used after March 1889. Few other recordings are known to survive from this period, and together, they symbolize the beginnings of the worldwide recording industry. 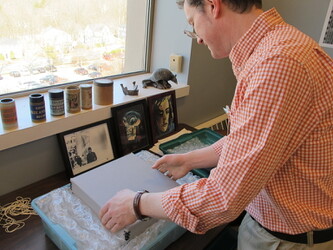 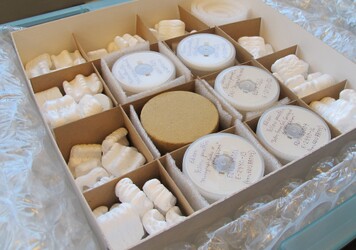 Curator Jerry Fabris hand-carried the Edison cylinders to NEDCC and packed them with great care.

Most of the cylinders had been digitized in 1995 on an Art Shifrin electric phonograph at the New York Public Library, but David and Jerry wanted to see if the IRENE platform could elicit better results from these unique and delicate recordings.

These unusual recordings presented some new challenges for NEDCC’s IRENE system. The yellow paraffin wax was too translucent for our laser focus sensor to detect, so we used depth information from the 3D camera to focus the images. The groove shape and depth of these experimental recordings were different than what we typically see from later recording processes, and even differed among this set.

About the Edison American Exhibition Recordings 1888-1889

These early cylinder recordings represent a transition between the sound experiments of the Edison and Volta laboratories in the late 1880s and the blooming of the phonograph and cylinder record market in the 1890s. The Edison lab used these recordings to demonstrate their developments in the art and science of sound reproduction in the US and abroad. Even within the six cylinders scanned for this project, we saw considerable variation in recording technology. 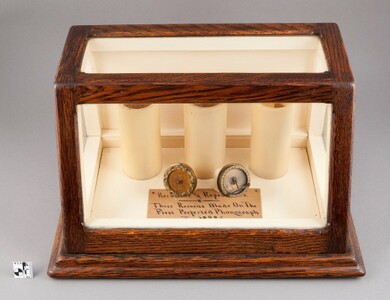 Assisting Edison during these early recording sessions were Theo Wangemann and Walter Miller. They recognized the symbolic significance of these three cylinder records, which have long been carefully preserved together - stored in this small wood and glass display case at the historic Edison Laboratory in West Orange, New Jersey. 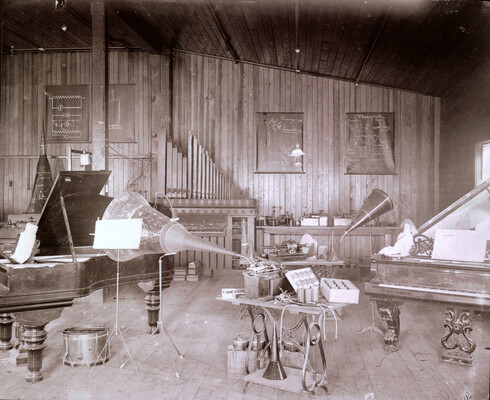 Edison’s Laboratory Music Room,
the same room in which this recording was made of Miss Effie Stewart
of New York City performing the Pattison Waltz on February 25, 1889.
(The Effie Stewart cylinder is in the center in the above photo of the display case.)


[This sound clip is as seen/heard by the IRENE3D technology.]

“Miss Stewart was an accomplished singer—a soprano soloist at St. Patrick’s Cathedral in New York.  Her cylinder recordings were played at public exhibitions in the U.S., in October and December 1888; others were later sent for exhibition in England and Russia.  Stewart’s recordings for Edison rank among the earliest successful efforts to capture and preserve 'serious' vocal music.” (Bill Klinger, ARSC, National Recording Registry: 2002 Nomination for Edison American Exhibition recordings, 1888-1889.)

Our thanks to the Thomas Edison National Historical Park for inviting NEDCC to participate in this important work.

Display Case for Phonograph Cylinders: NPS Object EDIS 475
NPS catalog description: Display case for three early phonograph cylinders, one reproducer and one recorder.  Finished oak frame with glass front and glass sides.  Interior wood is painted off-white.  Top and sides are sealed shut with screws in bottom.  Case holds EDIS 564, EDIS 565 and EDIS 566: three "yellow paraffin"-type wax cylinder phonograph records from 1888 and early 1889 in good condition.  In front of cylinders in case are phonograph recorder EDIS 567 and phonograph reproducer EDIS 568, both from circa 1888 or early 1889.  Label in case reads: "Recorder and reproducer.  Three records made on the first perfected phonograph in 1888/9".  This case is described by Walter H. Miller in article: "The Talking Machine World", October 15, 1913, p. 13.  In January 2003 the Library of Congress included these three cylinders recordings in the National Recording Registry.