Many materials, many hues . .

The NEDCC IRENE Lab is beginning to work on some of Carnegie Hall's materials as part of the pilot program for the grant. As the lab continues to work with the 2D imaging process, we’ll feature excerpts from disc recordings in our pilot collections.

Carnegie Hall's collections include a variety of recordings on the Carnegie Hall Recording Company label.  As our audio specialist was working with this one-sided lacquer disc, he discovered this intriguing clip from a radio broadcast on March 11, 1950 called "I Stand and Listen,"  featuring guest speaker Harold E. Stassen. 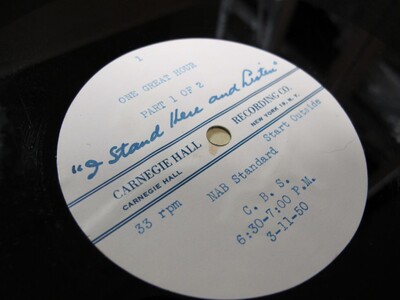 There is little information on the background of this particular recording, other than it was most probably part of the Protestant Church's efforts to raise money for European reconstruction after World War II.  There was a national effort to expand the fundraising around a common cause.  In 1950 they began using the name "One Great Hour of Sharing" and several radio broadcasts were produced.

When you listen, you'll see why we were interested in this clip. NEDCC (And the IRENE Lab itself) are currently housed on the 4th floor of a renovated historic woolen mill building in Massachusetts. Those background sounds could have been inside these very walls . . .