Cracked and Damaged: The Mystery Cylinder

His Name is Embroidered on My Mantle So Green...

This week, the Lab is trying out IRENE’s capacity to image cracked or damaged cylinders. Because of IRENE’s ‘touchless’ system, the recordings on cylinders that were thought to be unplayable are able to be safely imaged and turned into sound.

While a cylinder phonograph (spinning at nearly three revolutions per second) would probably damage the recording or the stylus on a cracked cylinder like this one, and probably not correctly track the groove across the crack, IRENE's contact-free approach allows us to bypass the damage and continue playing. 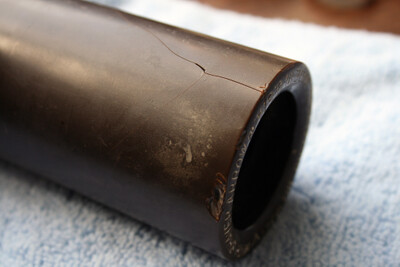 Almost all the singers and musicians featured in Middlebury College's Helen Hartness Flanders Ballad Collection have been identified and cross-referenced. But on several cylinders, such as this one, the singer is unknown.

This is a perfect example of IRENE's 'discovery' capability. We can learn what's on recordings that don't have descriptive metadata and haven't been played for a variety of reasons, including fragile or broken media, or a lack of playback equipment.

We have pieced together a transcription of the lyrics here:

As I went a-walking one evening in June
To view the fine fields and the meadows so green
I spied a fair damsel, she appeared like a queen
With her costly fine robes and her mantle so green

(My pretty fair maid?) will you come along with me?
I’ll dress you in rich attire, and married we’ll be (forgets words – oops!)
(restarts verse)

My pretty fair maid, will you come along with me?
We’ll join hands in wedlock, and married we’ll be
I’ll dress you in rich attire, you’ll appear like a queen
With your costly fine robes and your mantle so green

She answered – please no, sir, you must be refused
For I’ll wed with no man you must be excused
Through the green fields I wander for to shun all men’s view
For the lad that I love died in famed Waterloo

If you are not married, pray tell your love’s name
For I (was in the?) battle and I’d know the name(?)
Draw near to my garment and there you will see
His name is embroidered on my mantle so green

Note:
As always, thanks go out to Dr. Carl Haber and Dr. Earl Cornell of Lawrence Berkeley National Laboratory. Without them, these discoveries (and the discoveries yet to come) would not have been possible!